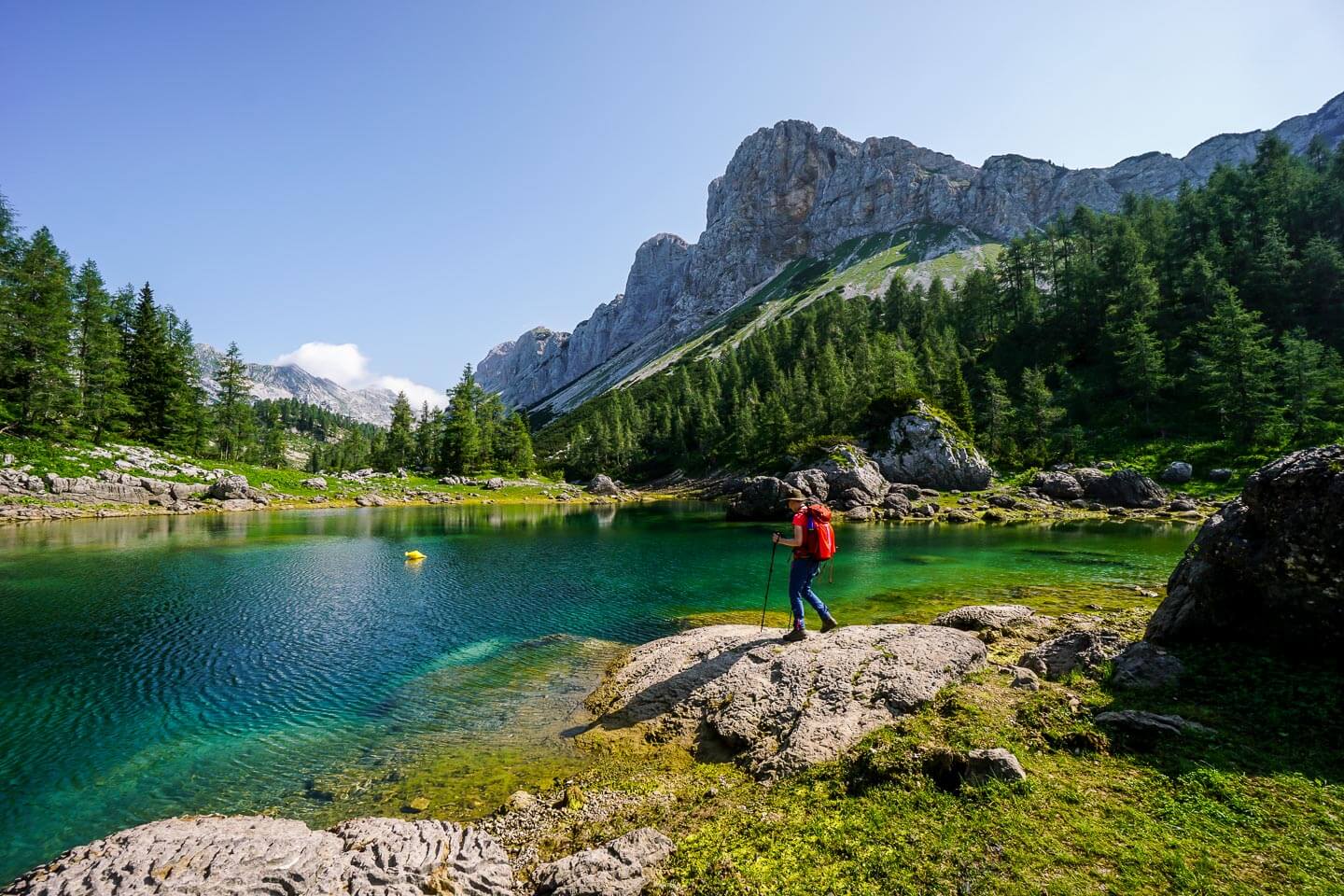 By moonhoneytravel
Sep 07, 2021 8 Comments
in Slovenia

Triglav Lakes Valley is an alpine glacial valley in Triglav National Park in the Slovenian Julian Alps. The valley takes its name from Slovenia’s highest peak, Mount Triglav, the most beloved mountain in Slovenia. Famed for its string of seven lakes, this pristine valley is also called the Seven Lakes Valley.

The Seven Lakes of Triglav Lakes Valley are:

You can hike to the Seven Lakes Valley as part of a multi-day hike (read: Triglav National Park trek), or as a day hike.

The tourist board at Ribčev Laz cautions people against hiking to Seven Lakes from Koča pri Savici after rain, and are emphatic about not descending that route.

In this post, we’re going to outline the easiest approach to the Triglav Lakes Valley, starting at Planina Blato. It’s also the most romantic, as you’ll amble across several alpine pastures dotted with wooden herdsmen huts. We sorely loved this route and we hope you will too.

This post links to products and services we love, which we may make a small commission from, at no extra cost to you. Thank you for supporting our blog!! – Sabrina and  Kati

The Seven Lakes Valley is located within Triglav National Park, a protected natural environment. During your visit, please adhere to the following rules:

How to Get to Planina Blato Trailhead

Planina Blato is an alpine pasture and a popular trailhead in Triglav National Park.

Follow the serpentine road all the way to the parking area just below the mountain pasture.

Given the popularity of this trailhead, we highly recommend getting an early start (6 am).

During the high summer season, a free shuttle connects the villages of Lake Bohinj with Planina Blato. The shuttle drop-off point is called “Križišće / crossroad Vogar-Blato” (46.306951, 13.853603), and it’s located 640 meters from the trailhead. When you get off the shuttle, head towards Blato (not Vogar).

Hike up from Stara Fužina

The route is essentially the same, however, you would have to hike up an additional 600 meters. In total, your hike to the Seven Lakes would be 12-km one-way (5 – 6 hours one-way), involving a 1500 meter ascent.

If you’re determined to do that, you might consider breaking up the journey, by overnighting in Koča pri Triglavskih jezerih (Triglav Lakes Hut), or Koča na Planini pri Jezeru.

If you want to integrate this hike into a road trip, check out our 2 Week Slovenia Itinerary.

After arriving at the Planina Blato car park, walk back down the road a few meters, to the signed trailhead (GPS Coordinates: 46.310829, 13.849299). Follow signs to Planina pri Jezeru.

Note: Depending on the time of day and season you’re hiking, you may not be able to park at the car park. If that’s the case, just park on the side of the road, as close to the trailhead as possible.

You’ll steadily ascend along a wide forest road for about an hour to Koča na Planini pri Jezeru, a managed mountain hut located on an alpine pasture above a lake.

This is the only part of the hike that’s a bit monotonous.

From Koča na Planini pri Jezeru, there are two ways to Koča pri Triglavskih jezerih (Triglav Lakes Mountain Hut). You can hike to the Triglav Lakes hut via the Planina Dedno Polje mountain pasture or the Planina Viševnik Mountain Pasture.

The gravel track is flat initially, but quickly steepens. After about 10 minutes, you’ll arrive at a trail intersection. Continue straight.

The path progresses through beautiful spruce forest for another 20 minutes to Planina Dedno Polje.

The track wraps around the planina at a slight elevation. As you walk, a picturesque scene of herdsmen huts huddled together in a sea of green grass, speckled with boulders, unfolds before you. It’s one of the most enchanting places in the Julian Alps.

After about 45 minutes, the views open up towards the Souther Julian Alps. You can see Vrh nad Škrbino, Podrta Gora, Tolminski kuk, Vrh Planje, Mahavšček, and Bogatin.

The trail descends to the large Ovčarija mountain pasture.

The more direct route is via the Štapc saddle. Though it’s 1 km shorter, it’s the more difficult route.

We continued right, opting for the Štapc route. The rolling trail ascends through forest for about 40 minutes (1.4 km) to Štapc.

The initial descent from Štapc is steep, but easily managed, as it’s secured with a fixed cable. Though the secured passage is short, we recommend putting your hiking poles away, so you can grasp the cables more easily.

At the base of the secured passage, a trail continues diagonally towards Dvojno jezero (Double Lake), which you can already see. The path crosses the slopes of Mala Tičarica along a loose rocky path, which can be slippery at times.

Koča pri Triglavskih jezerih is an ideal destination for lunch. Order food and drinks inside (cash only). To the right of the counter, there’s a board with the daily offerings like:

If you need to fill up your water, there’s a water fountain outside the hut.

Most hikers will end their hike at Double Lake, enjoying lunch at Koča pri Triglavskih jezerih.

However, the Double Lake is only one of 7 gorgeous lakes in the 8-km-long Triglav Lakes Valley.

If you have the stamina, we recommend hiking up the valley another 45 minutes (2.5 km, 168 m ascending) to Veliko Jezero (also called Jezero v Ledvicah which means Kidney Lake), the largest lake in Triglav Lakes Valley.

How to Extend your Seven Lakes Valley Hike

It’s easy to make this a 2-day hike. If you want to see more highlights of the Triglav Lakes Valley, continue hiking up the valley to the mountain hut Zasavska koča na Prehodavcih (2071 m), where you can stay the night.

If you have a lot of high-alpine hiking experience, we highly recommend the Veliko Špičje Ridge Trail. This exciting route follows the route described in this post and then continues 2:30 hrs to the summit of Veliko Špičje.

From the peak, you’ll continue along the main crest of Špičje for 2 hours, before descending to the Zasavska koča hut. The next day, you’ll hike down the gorgeous Seven Lakes Valley, passing Zeleno Jezero (Green Lake) and Jezero v Ledvicah (Kidney Lake), before returning to the Triglav Lakes Hut.

If you’re interested in learning more about overnighting in a Slovenian mountain hut, read these posts next:

At Planina Viševnik, you can grab refreshments at Bregarjevo zavetišče na planini Viševnik (Bregarjevo Shelter on Plateau Viševnik). Bregarjevo used to be a cheese factory. In 1981, the old farm was transformed into the shelter which offers overnight stays. It’s open from early June until the end of September.

Once you arrive at Koča na Planini pri Jezeru, follow the familiar wide track back down to Planina Blato.

Where to Stay for the Triglav Lakes Valley Hike

The newly renovated Hotel Bohinj is located in the center of Ribčev Laz, only a few meters from Lake Bohinj. Designed to impress as much as to pay homage to the region’s cultural heritage, Hotel Bohinj is the most striking hotel in the Bohinj region. All rooms have air-conditioning. Guests are treated to a healthy and delicious breakfast buffet. You can also enjoy dinner at the hotel and indulge in a wellness package.

Book your stay at Hotel Bohinj.

Look for accommodation in Ribčev Laz.

Majerca Hotel and Restaurant is a lovely boutique hotel in Stara Fužina. This is a real gem. The restaurant extends into a grassy lawn, with views of farmland backed by the Julian Alps. It’s wonderful to start and end your day here. Breakfast is phenomenal.

Book your Stay at Majerca Hotel and Restaurant.

Look for accommodation in Stara Fužina.

Learn more about hiking in Slovenia:

Plan your trip to Slovenia: