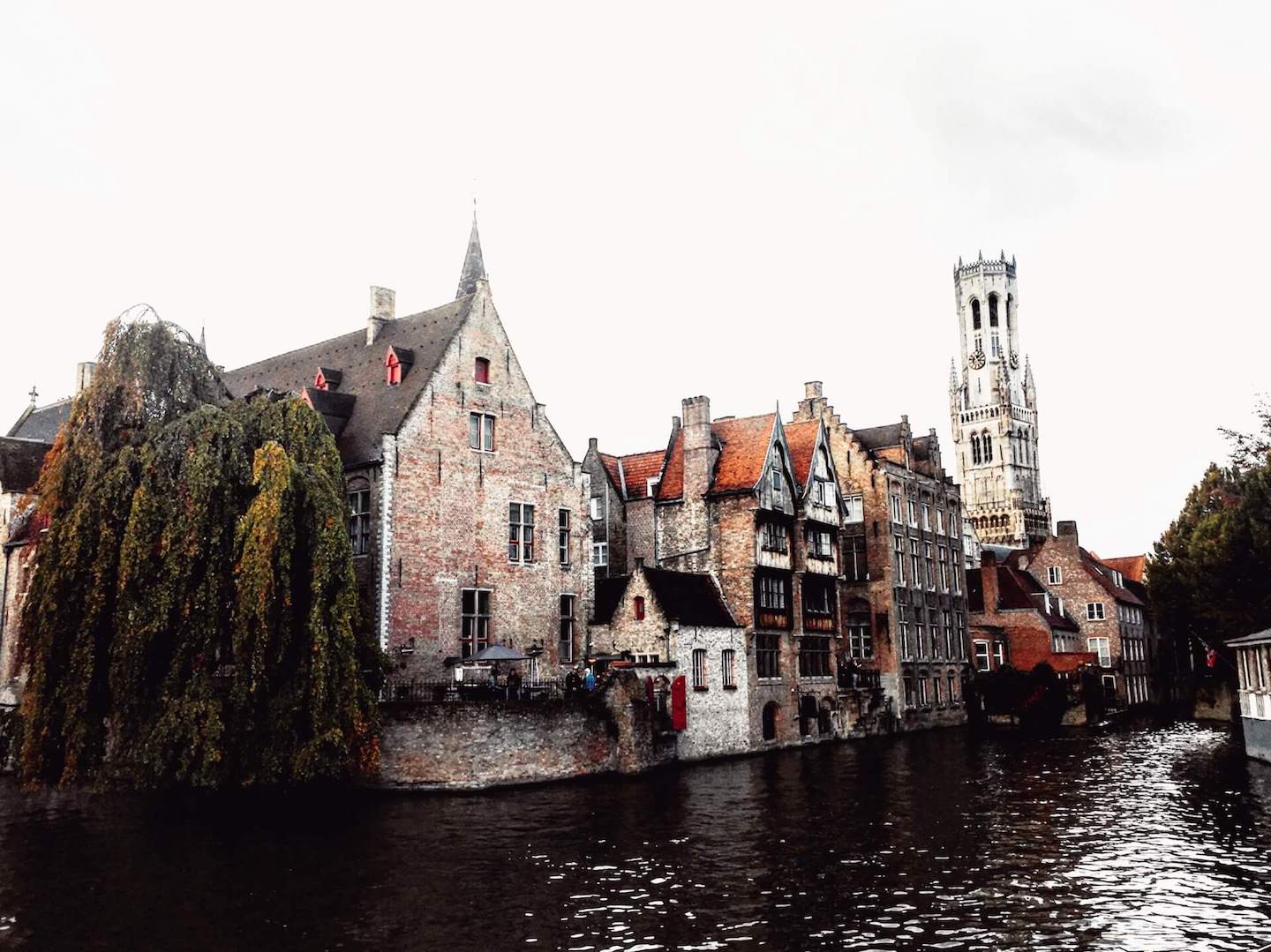 Belgium is the country of grand market squares, crow-stepped gables, comics, and peeing statues. Belgium is also a vastly underrated country, too often overshadowed. While living in Germany, we made three separate trips to Belgium.

You could say that we’re hooked on the medieval architecture and the Trappist beer. In a land where every beer has its own glass, drinking is elevated to high art.

We recognize that this low country is more than just beer, mussels, waffles, frites, and chocolate. But, if you don’t relish all those things during your visit, you’re also missing the point.

So, please eat and drink until you’re silly. We’ll be with you in spirit. 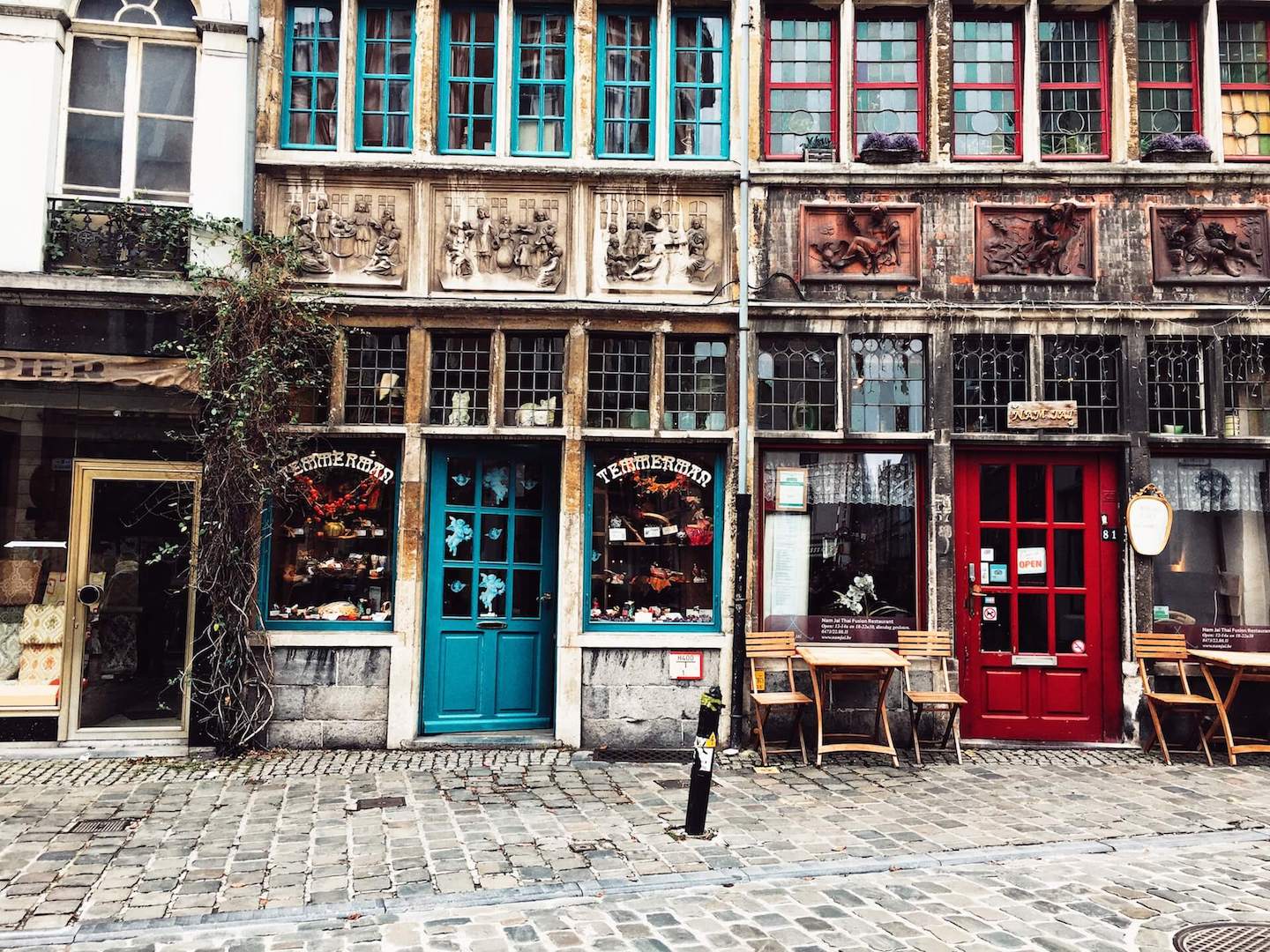 Tipping Etiquette: On a restaurant bills, you can round up the bill. For exceptional service, tip 5-10%.

Something Interesting: Belgium has more comic strip artists per square kilometer than anywhere else in the world. 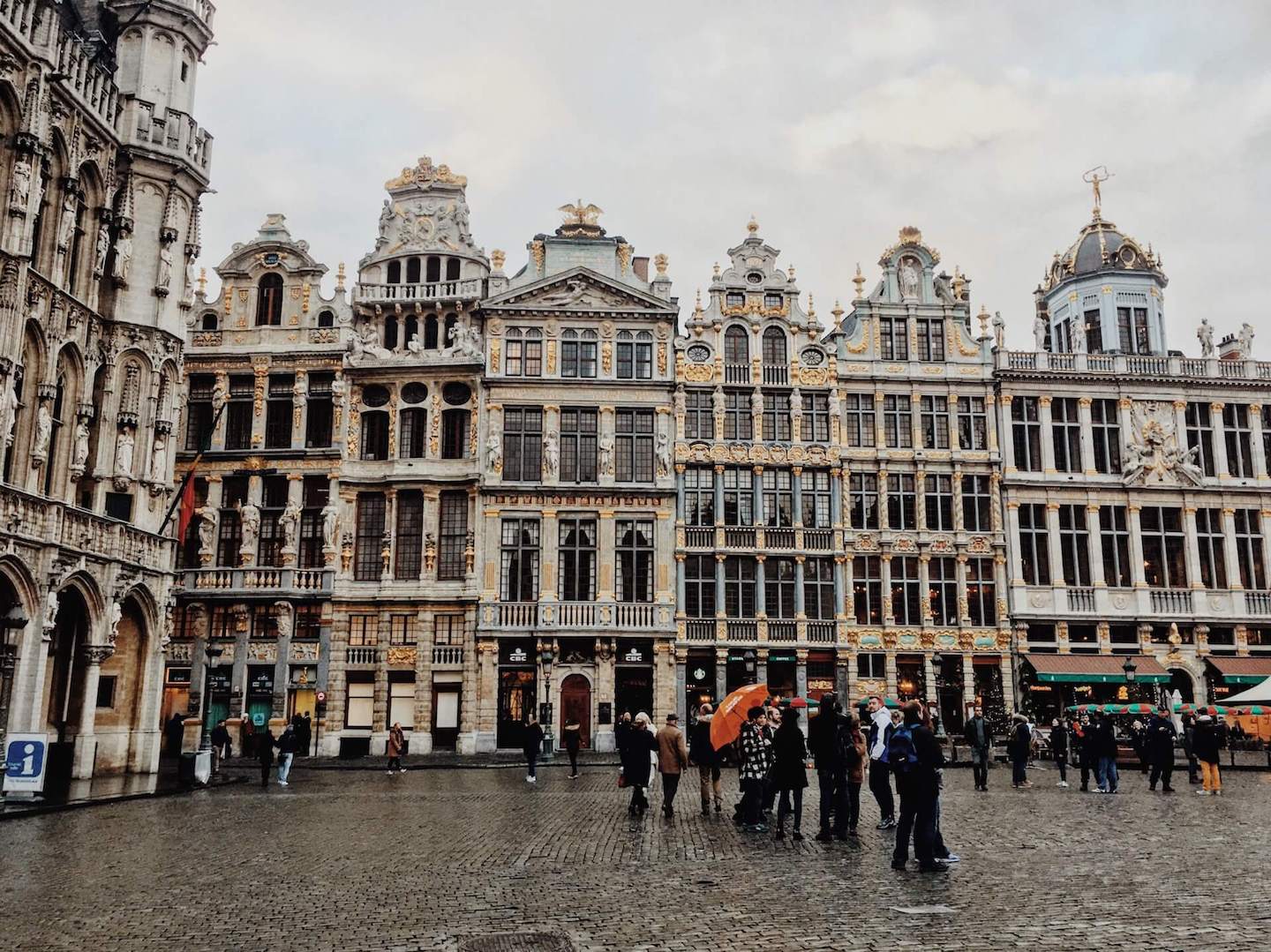 Where to Go in Belgium Who knows why geese go barefoot?

That’s just how it is.

What to Experience in Belgium

Antwerp: The City of Giants and Diamonds

Antwerp (Antwerpen in Flemish) is a multi-cultural city in Flanders that boasts the second largest port in Europe. Local legend credits the city’s rise to a Roman soldier who killed the Giant Antigoon. This particularly nasty giant terrorized the local population by cutting off the hands of sailors and tradesmen who didn’t pay his steep river-crossing toll.

The Roman soldier, Brabo, challenged the giant to a duel and after defeating him, cut off his hand and threw the hand into the Scheldt River. The city’s name, Antwerpen, is derived from “hand werpen,” which means “hand throwing.” Brabo is commemorated in a giant fountain facing the City Hall in the middle of Antwerp’s Great Market Square (Grote Markt).

Learn More: How to Spend a Weekend in Antwerp

This Flemish city has a special relationship with giants. Throughout the city, you’ll see images and statues of the Virgin Mary, because her image was said to ward off giants.

Antwerp is also the city of diamonds, as it’s the most important diamond trade center in the world. Diamonds have been traded here since the 15th century. It’s really interesting to walk through the diamond district and watch diamond traders negotiate deals in the streets outside world-renowned diamond institutions.

You’ll also see many Jewish Orthodox-owned businesses (diamond retailers, bakeries, Kosher grocery stores) next to African textile shops. Interestingly, Yiddish continues to be the primary language of the Jewish community in Antwerp, which is one of the largest in Europe. And, 30 of Belgium’s 45 active synagogues are in Antwerp.

Where to Stay in Antwerp:

Bruges: The Medieval City of Swans

Bruges (Brugge in Flemish) is an enchanting city in Flanders that was once a thriving trade center in the Middle Ages. Replete with swan filled canals, cobblestone streets, and crow-stepped gables, Bruges retains its medieval character most beautifully. UNESCO thinks so too. The whole Historic Centre of Brugge is a UNESCO World Heritage Site.

There’s a very vindictive reason why swans grace the canals of Bruges. The legend goes that the oppressed people of Bruges revolted against their ruler Emperor Maximilian of Austria in the 15th century. They captured and imprisoned the emperor and his advisor, Pieter Lanckhals. Pieter was condemned to death, and Maximilian was forced to watch the beheading.

The Emperor managed to escape and returned to the city with an army to take his revenge. He mandated that the city at its own expense must keep swans on all canals for all time. Why swans? The long-necked creatures served as a reminder of what the people of Bruges did to Pieter Lanckhals, or  Pieter the “Long Neck.” To this day, long necks continue to glide through the medieval city center.

Bruges deserves more than a day. Stay the night, visit the vibrant Basilica of the Holy Blood, learn about the 12th-century Belfry, drink Brugse Zot at a beer café, visit De Halve Maan Brewery, and shop for chocolate. To learn more legends about Bruges, we recommend the free walking tour: Legends of Bruges.

Where to Stay in Bruges:

Ghent: The City on Two Rivers

Ghent (Gent) is a historical city in Flanders that has a young student population, a thriving flea market culture, and an architecturally rich city center. The city is located on the confluence of the rivers Leie and Scheldt, and according to Flemish folklore, Ghent was borne out of the divine love of the god Scheldt and goddess Leie.

After strolling through the medieval streets and hopefully treating yourself to some Gentse Strop beer, head to the moated Castle Gravensteen (Castle of the Counts). This grim 10th-century castle is a haunting reminder of the darker side of medieval times. There’s a torture instrument exhibition inside the Castle.

For something less gruesome, head to STAM City Museum. If you’re in Ghent on a Sunday morning, there are bird, book, antique and flower markets throughout the city.

We joined a Walking Tour and loved it. We learned about historical buildings, Ghent’s historical prominence and later demise, and the city’s culinary treasures. Meeting Place: Sint Michielsplein 21, Outside the Uppelink Hostel.

Where to Stay in Ghent:

Brussels: The Capital of Europe

Brussels (Bruxelles, Brussel) is the capital of Belgium, the headquarters of NATO, and the seat of the European Union. Though Brussels may sound like the playground for bureaucrats, it’s a jovial city with a lot of soul.

From its beating heart, Grote Markt, to it’s comic-strip painted walls and peeing statues, Brussels is a captivating place. Only in Brussels have we experienced getting an entire restaurant bill footed by the owner.

Though Brussels sits in the Flanders region of Belgium, the capital is predominantly French-speaking. Every street name is written in both Dutch (Flemish) and French. In many ways, Brussels represents the divisions of its country, as it endeavors to hold it all together.

During our visit, we spent lots of time walking through flea markets and gawking at chocolate concoctions. We also did a Walking Tour that was truly excellent.

Where to Stay in Brussels: 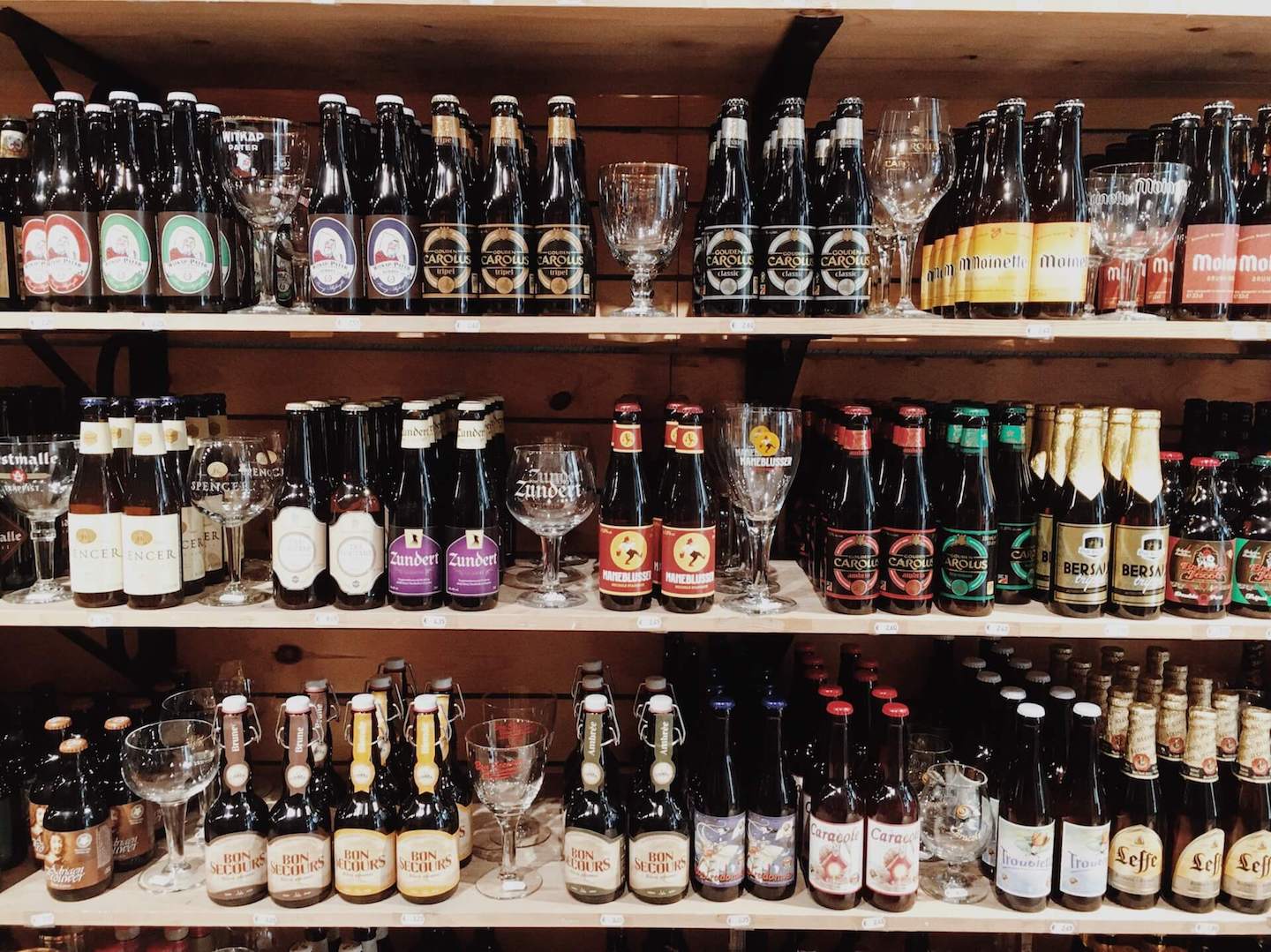 What to Drink in Belgium

There are more Belgian beers than days in the year. Or, we should say in 4 years. Aside from the sheer quantity, it’s the creativity that makes Belgian beer the best in the world.

Unlike Germany, Belgian brewers aren’t subjected to a beer purity law (Reinheitsgebot), which means that they can add various herbs, spices, and fruits to their beers.

The beer that you absolutely have to try in Belgium is a Trappist beer. A Trappist beer is a beer made by or under the supervision of monks of the Cistercian order.

The beer must be made in or near an active Cistercian monastery. Money made from the beer goes directly to the upkeep of the monastery and living expenses of the monks.

Any extra profit goes to charity. There are 6 Trappist breweries in Belgium: Achel, Chimay, Orval, Rochefort, Westmalle, and Westvleteren. Our favorite is Westmalle. 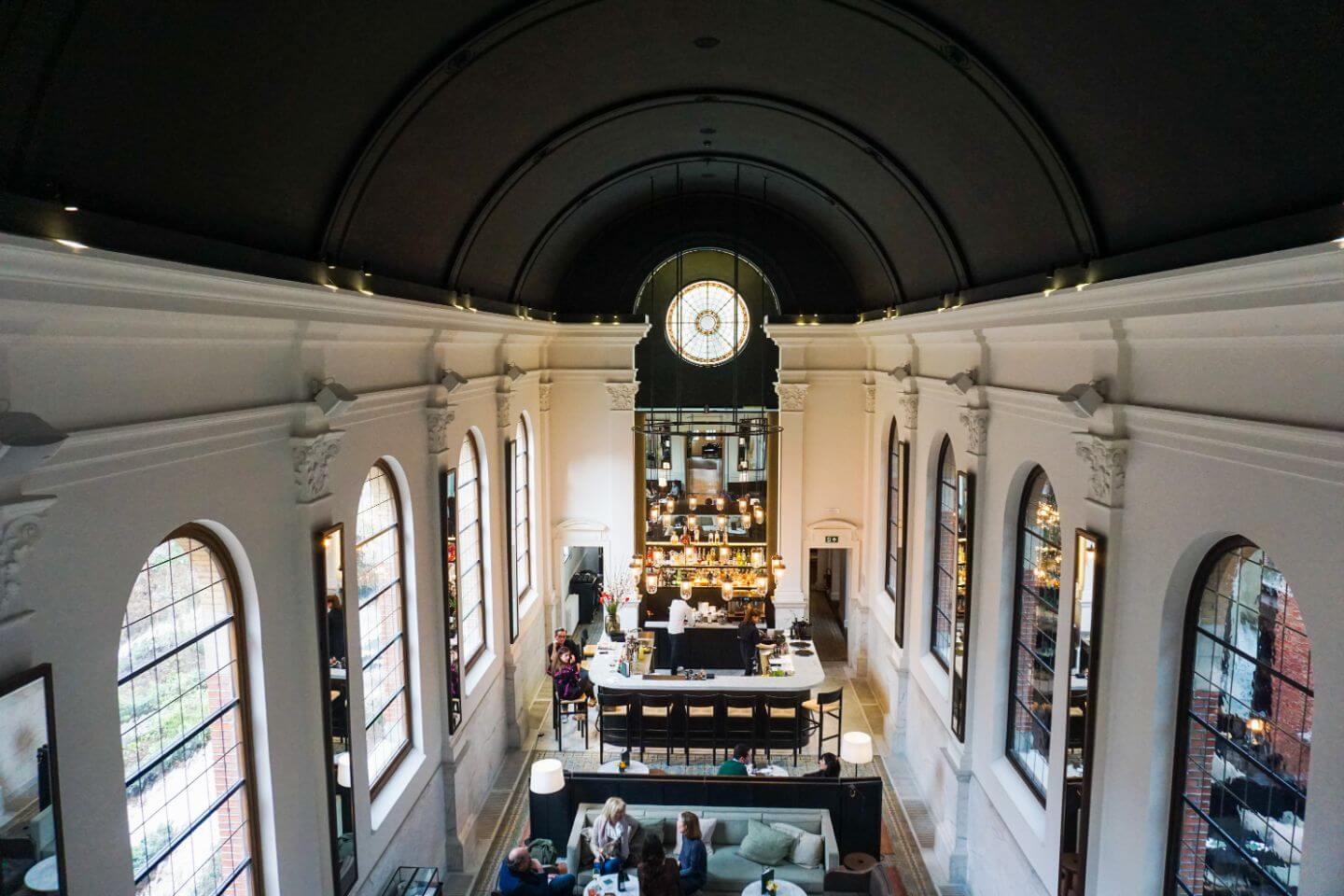