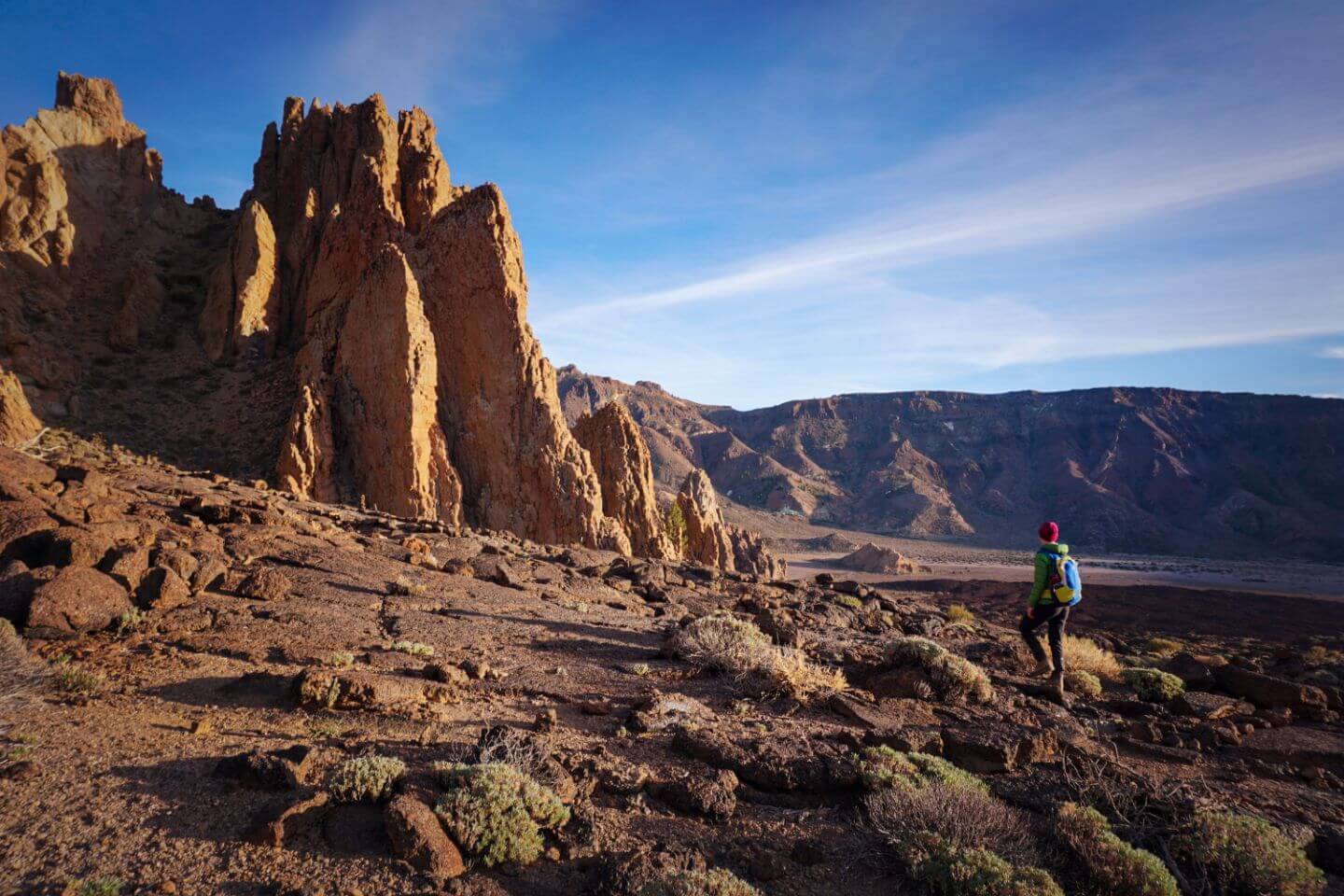 By Sabrina Brett
Apr 12, 2020 Leave a comment
in Spain,Tenerife

Hiking in Tenerife convinced us that the Canary Islands are one of the best hiking destinations in Europe, especially in winter. From sweeping volcanic landscapes evocative of Mars to rolling verdant mountains that unfurl into the sea, this island enchants at every turn.

The most impressive hiking trails in Tenerife are concentrated in the Anaga mountains, Teide National Park, and the Teno mountains. We recommend spending at least one week on the island to sample each of these regions, as outlined in this Tenerife road trip itinerary.

This Tenerife hiking guide provides an overview of our favorite trails on the island, with links to more in-depth posts.

Helpful guide: Where to Stay in Tenerife for Hiking

All of these trails are plotted on a map at the end of the post.

Tips for Hiking in Tenerife

The point-to-point hike from Santiago del Teide town to Masca village showcases the majesty of the Teno Mountains. It’s a walking route that we’d have gladly done again and again.

You’ll initially ascend 388 meters to the Degollada de la Mesa col. From here, take a quick detour to Pico Verde, which serves up unbeatable views of the sinuous TF-436 cutting through the mountains to Masca.

Returning back to the col, you’ll follow the ridge trail and ultimately descend through laurel forest and to the Mirador de Cruz de Hilda lookout point. The last stretch takes you to Masca village, where you can grab a bite to eat before shuttling back to Masca on Bus 355.

Learn more about this hike: Hiking in the Teno Mountains

Where to Stay: Santiago del Teide, or Los Gigantes

Look for accommodation in Los Gigantes.

Pico del Teide gets all the press. After all, it’s Spain’s highest mountain. However, if you look beyond the imposing volcano, you’ll find a plethora of hiking trails that traverse Las Cañadas caldera. One short and easy walk everyone should do is Roques de García.

With Mount Teide in full view, you’ll circuit the park’s most striking rock formation in just over an hour. The hike starts at the viewpoint Mirador de la Ruleta, directly across from Parador Nacional.

From the Mirador de la Ruleta lookout point, you’ll see the impressive La Catedral rock jutting out of the Caldera floor. In the background, the caldera rim looks like a wall of stone.

Where to Stay: Teide National Park, or Vilaflor

Look for accommodation in Vilaflor.

Montaña Guajara is the highest mountain along the caldera rim in Teide National Park. While there are a few ways to summit Montaña Guajara, we recommend starting at Parador Nacional. From here, it’s a slow and steady ascent to the Guajara plateau. At the top, you’ll have a brilliant birds-eye view of the caldera landscape and Teide. The whole circuit hike takes 4:30 hours.

Where to Stay: Teide National Park, or Vilaflor

Look for accommodation in Vilaflor.

The Anaga massif is the oldest part of the island and, in our opinion, the most beautiful range in Tenerife. The Anaga mountains feel like a living being, eternally gliding into the sea.

To get a substantial overview of this Tenerife mountain range, we recommend hiking this 6-hour circuit trail.

This Tenerife hike begins in the tiny hamlet of Benijo, close to Taganana. The trail follows the coast all the way to the Faro de Anaga lighthouse. From here, you’ll hike to the village of Chamorga, which is located at the very end of the Anaga Mountain Road. The trail then continues all the way back to Benijo.

We’ve outlined this hike in detail in our Benijo to Faro de Anaga trail guide.

Look for accommodation in La Laguna.

The pleasant Tenerife walk from the remote village of Taganana to the beach Playa de Tamadite delivers nonstop brilliant views of the Anaga coastline in both directions.

This is an easy walk with little grade variation. The only tricky part is locating the trailhead. We used Maps.me to find it.

Early on, you’ll hike through the small wine-producing village called El Chorro. Before arriving at the beach, you’ll descend to Barranco de Afur, where you’ll cross a stream. Playa de Tamadite is the perfect place to eat lunch and take a break, before starting the return journey back to Taganana.

Note: it’s possible to expand this hike, as seen on the map. We weren’t able to do this circuit, because the trail between Afur and Playa de Tamadite was closed. Get updates on the trail at the Cruz del Carmen visitor center.

This Tenerife hiking trail is invariably the most popular walk in Parque Rural de Anaga. Most hikers will start at the Cruz del Carmen Visitor Center and descend all the way to Punte del Hidalgo. That’s probably the best way to do it, especially if you’re based in La Laguna. You can take a bus to the trailhead, and then return to La Laguna with another bus from Punta del Hidalgo.

We did an out-and-point hike starting in Punta del Hidalgo to Chinamada and Carboneras because we wanted maximum flexibility. From the coast, the trail steadily climbs up above Barranco del Río to the Troglodyte (cave) settlement Chinamada. People still live in caves here, though they are modernized. When you arrive, head to Restaurante La Cueva for heartwarming Canary food.

You can continue to Carboneras (not a must-do), or head back down to Chinamada after lunch. For more details, read Best Hikes in the Anaga Mountains.

Endearingly referred to as  “Tenerife’s Matterhorn,” Roque de Taborno is a thumb-shaped rock that rises 706 meters above sea level on the north coast of the Anaga peninsula. A short trail circuits Tenerife’s Matterhorn, delivering godly views of the Northern Anaga Coastline. DO NOT MISS THIS HIKE!

This Tenerife hiking trail begins in the hamlet of Taborno in Anaga Rural Park. When you arrive, locate the chapel. You’ll walk along the right side of the tiny church and descend a few meters to a viewpoint. Continue following the trail to Roque de Taborno. As you circuit the rock clockwise, the views dramatically crescendo.

Read Next: How to Visit Anaga Rural Park

More Info for Your Trip to Tenerife: