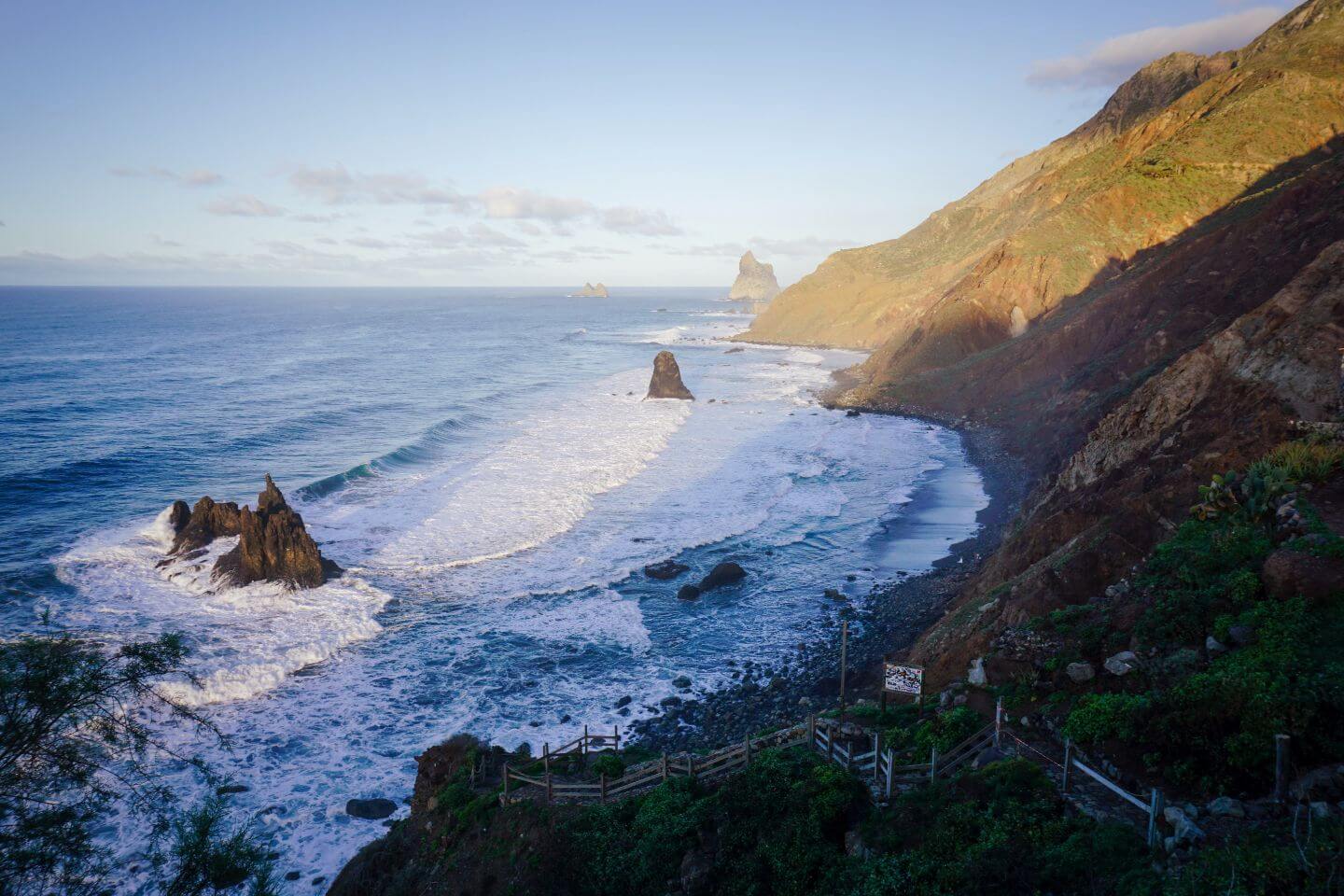 This impressive day hike in Anaga Rural Park showcases some of the most magical and remote corners of Tenerife, Spain. You’ll see tiny coastal settlements where time stands still.

You’ll walk by dragon trees and through laurel forest. And, you’ll be treated to the most spellbinding views of the Anaga coastline.

This Faro de Anaga circular route starts in the tiny hamlet of Benijo on the north coast of the Anaga peninsula.

You could also start this hike in Chamorga, the village at the end of the Anaga Mountain Road, but there are some advantages to starting and ending in Benijo.

Update January 2022: The path from Faro Punta de Anaga to Chamorga is currently closed. Please reach out to local authorities for trail updates.

In the meantime, you can hike from Benijo to Faro and then retrace your tracks back to El Draguillo. At El Draguillo, ascend about 1 km inland, until you reach an intersection. Turn right and follow this scenic path back to Benijo.

Read Next: Best Hikes in the Anaga Mountains

How to Get to Benijo

From Santa Cruz, take TF-11 along the coast to San Andrés. At San Andrés, head inland on the TF-12.

This narrow and windy road cuts through the Anaga range.

After about 30 minutes (18 km), you’ll turn right onto TF-134, which you’ll take all the way to Benijo. This is one of the most beautiful roads in Tenerife.

The fastest way to reach Benijo is to drive to Santa Cruz and then follow the directions above. This route will also be less congested.

The most efficient way to get to the trailhead in Benijo is with your own car.

We recommend using the Discovercars.com car rental reservation platform to search for and book car rentals in Tenerife. This easy-to-use booking platform compares car rental deals from 500+ trusted providers, so that you can choose the best option for your trip.

To start the hike, head to Restaurante El Frontón and follow signs to El Draguillo along Trail PR – TF 6.

The trail hugs the coastline along a flat, dirt (sometimes paved) road. In front of you, you’ll see Roques de Anaga, two rocks thrusting out of the ocean.

Behind you, you’ll see Taganana village and the rugged Anaga coast.

It takes about 30 minutes to walk 2 km to El Draguillo.

The trail to Las Palmas continues to hug the coastline, though the path narrows significantly. Expect rocky terrain and more grade variation.

For a shorter version of this hike, you can do a mini-loop (outlined in grey in the map above).

When you get to El Draguillo, turn right and follow signs to Chamorga (instead of heading to Las Palmas).

Note: You won’t go all the way to Chamorga. You’ll hike uphill for almost 1 km (270 m elevation gain) to an intersection.

From here, turn right, and start the glorious return journey to Benijo.

As you hike in the direction of the remote hamlet of Las Palmas, the Anaga rocks continue to be the focal point.

Facing the monolithic rocks and surrounded by green fields, it looks like a forgotten sanctuary at the end of the world.

It takes about 1 hour to hike from El Draguillo to Las Palmas. Along the way, you’ll see a few trail signs. Always head in the direction of El Faro.

From Las Palmas, the trail ascends and descends along a balcony trail to the lighthouse Faro de Anaga.

We opted for the Tafada mountain route because it was shorter.

However, It’s a more challenging route because you first have to ascend to the top of Montana Tafada via a steep and at times slippery trail, only to then descend to Chamorga.

Keep your eyes out for mountain goats, though you’ll probably hear them before you spot them.

Chamorga is a small village located at the very end of the Anaga Mountain Road. It’s also a popular trailhead, so you’ll see more people here than any other part of the route.

Side note: You could also start your hike in Chamorga. From the village, you can hike down to Punta de Anaga Lighthouse via Mounta Tafada.

And to return, you’ll proceed to the Roque de Bermejo and follow the Barranco de Chamorga trail back to the village.

There’s a village café called Casa Alvaro, which may, or may not be open. It was closed when we arrived.

From Chamorga, you’ll follow a shady, inland trail in the direction of El Draguillo. As you follow this forest trail, you’ll hear a chorus of birds.

The leaves make this part of the trail a bit precarious, especially after rainfall. Please take care.

At the next intersection, take the left trail (PR-TF 6.3), which ultimately leads back to Benijo (2.5 km). If you go straight, you’ll end up in El Draguillo.

As you emerge out of the forest, you’ll be treated to more sensational views of the Anaga coastline.

You’ll finish this hike by descending to Benijo.

Best Base for Hiking around Benijo

Furthermore, La Laguna is one of Tenerife’s most charming cities, offering plenty of dining options amidst colonial architecture.

Budget | Casa Lagunera is a newly renovated apartment-style accommodation in the quiet neighborhood of El Coromoto. The owners offer a free shuttle service from the Tenerife Norte Airport. With its small, but mighty kitchenette, you can prepare your own breakfast and lunch supplies for hiking.

Mid-Range | Casa Del Casco Historico is a centrally located guesthouse in La Laguna, walking distance to many restaurants and cafés in the historic center. Guests have access to a shared kitchen, lounge, garden and terrace. Coffee, tea, and cookies are provided.

Book your stay in La Laguna.

Though not as photogenic as La Laguna, Santa Cruz de Tenerife feels genuine and local. Seeing the sunrise over the ocean each morning was a real treat.

Budget | Casa Weyler is a friendly and centrally located bed and breakfast in Santa Cruz. Guests have access to a large communal kitchen and lounge and balcony (6th floor) with mountain and sea views.

Mid-Range | EDI Astoria impresses easily with its bright and cheerful interior. Each modern unit has it’s own fully equipped kitchen and dining space. EDI Astoria is located in the center of the city, which is very convenient, but it can also get noisy at night.

Read Next: Where to Stay in Tenerife for Hiking

Plan your trip to Tenerife: