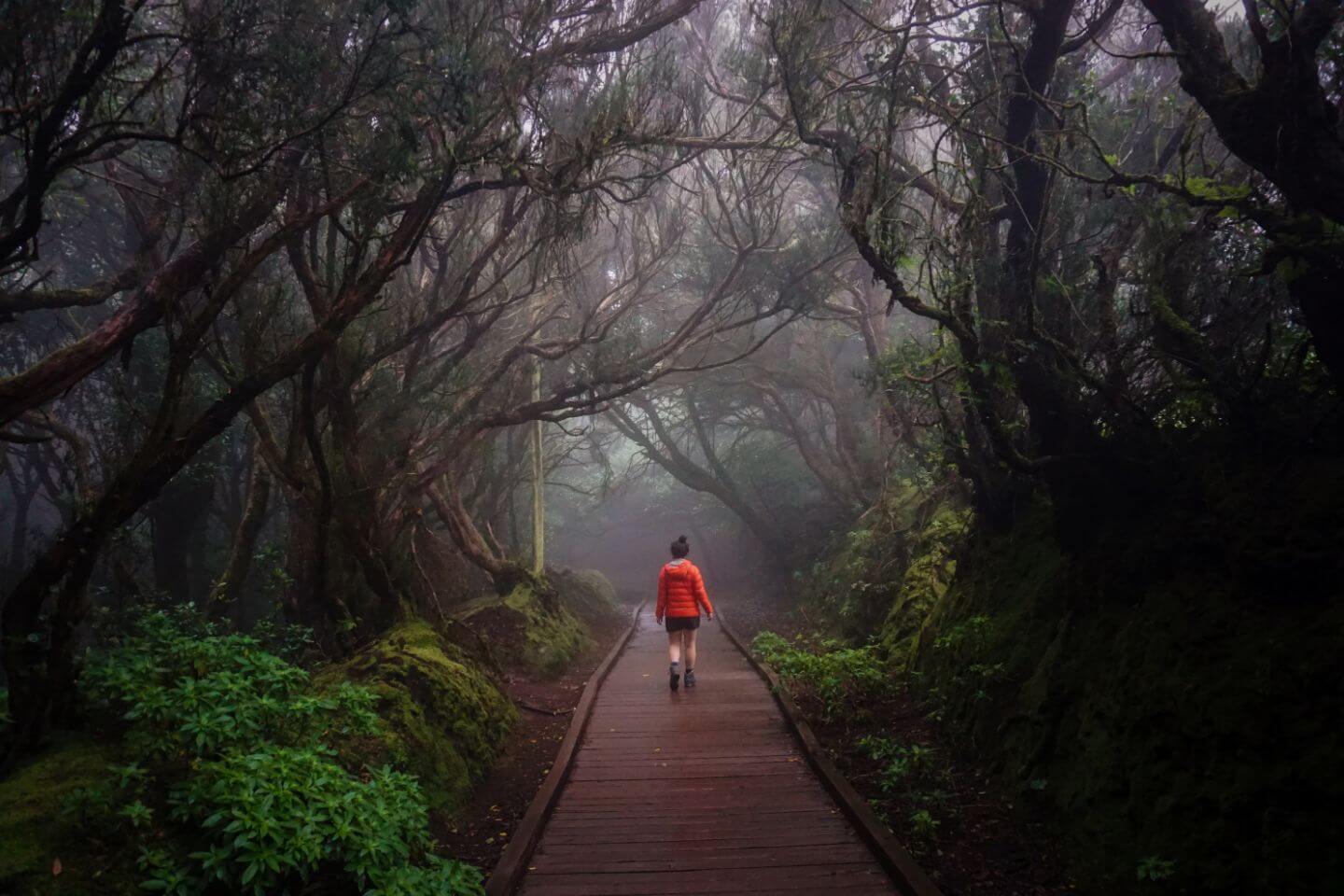 10 Unique Things to Do in Tenerife in January, Canary Islands

By Sabrina Brett
Apr 15, 2020 Leave a comment
in Spain,Tenerife

January is an excellent time to visit Tenerife. Daytime temperatures hover around a comfortable 20°C (68°F) and skies are generally clear. The first week of January is the busiest, as many Europeans are on holiday until January 6th. So, if you can, we’d recommend visiting Tenerife after January 6th.

January 1st (New Year’s Day) and January 6th (Three King’s Day) are celebrated in Tenerife, and consequently, all local businesses will be closed on both days. However, restaurants will still be open around tourist resort towns. If you’re staying in smaller towns and villages, we recommend booking an apartment with a kitchen (during that first week of January).

The weather in Tenerife in January was outstanding, with the exception of a few overcast and windy days. We stayed in Los Gigantes, Arona, Los Silos, La Orotava, and Vilaflor. The only thing that deterred our travel plans was the wind. When it’s really windy, the cable car in Teide National Park doesn’t operate and hiking is unpleasant, as you’re battling the wind. On such days, it’s best to head to the coast. Other than that, we had a perfect trip and would head back to Tenerife in January in a heartbeat.

In this guide to visiting Tenerife in January, we’re highlighting our favorite experiences from our trip, tips on where to stay, and what to pack for a winter holiday. 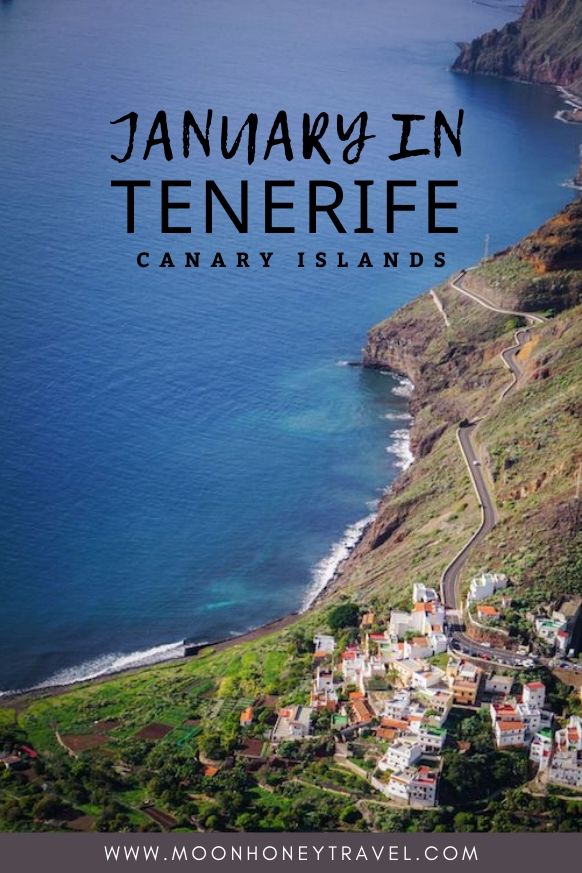 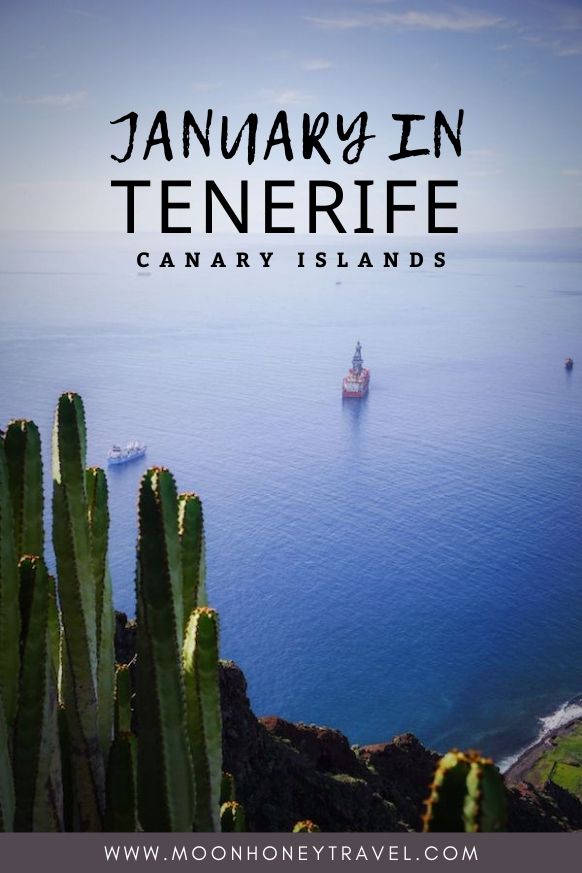 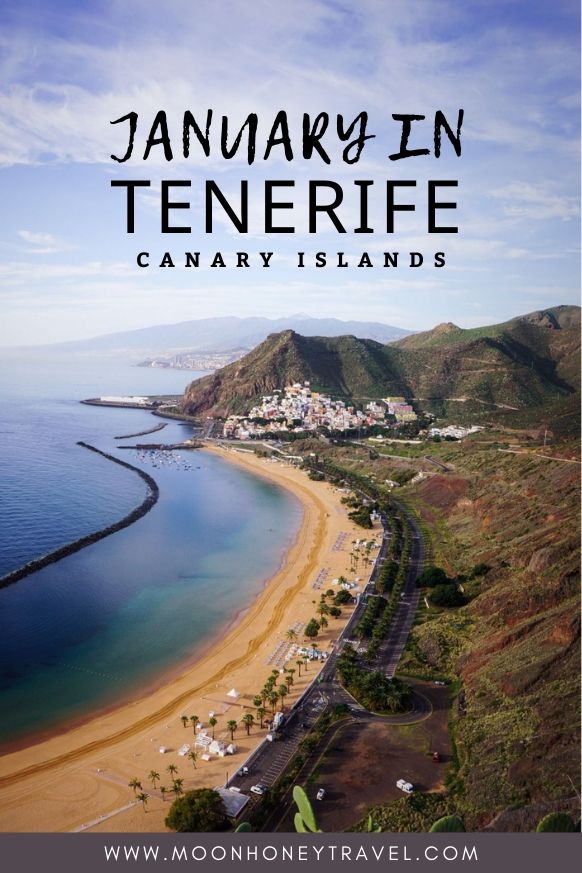 Unique Things to Do in Tenerife in January

1. Hike in the Anaga Mountains 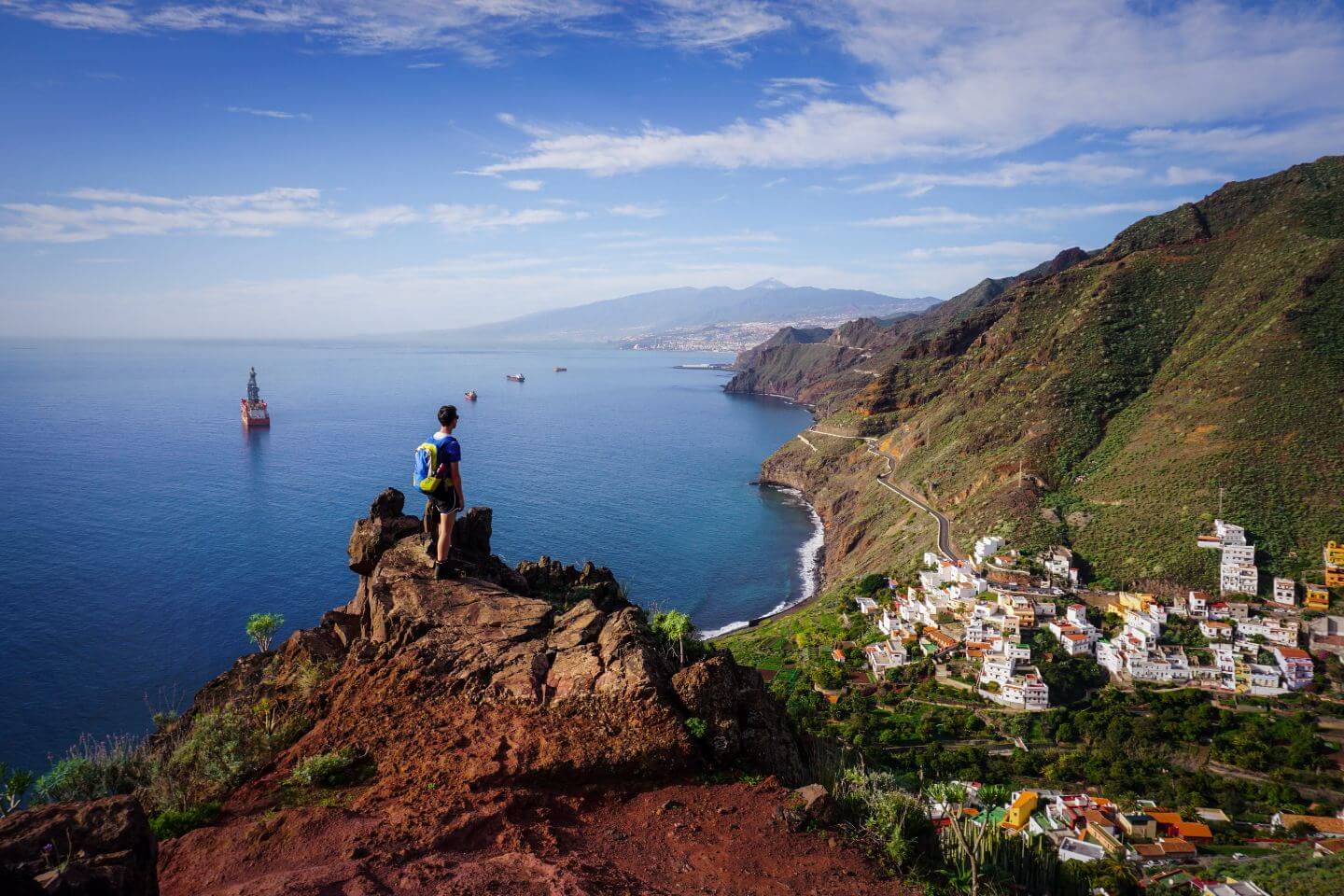 The Anaga massif is a mountain range that stretches across the northeastern tip of Tenerife. Geologically, this is the oldest part of Tenerife as it was formed by a series of volcanic eruptions 7 to 9 million years ago.

We’d argue that Anaga harbors the most beautiful and varied hiking trails on the island. So, it’s shocking that this corner of Tenerife is often overlooked.

We recommend spending three full days exploring Anaga Rural Park. Base yourself in La Laguna. These two posts will steer you towards the best trails, viewpoints, and roads in the park:

2. Bathe in a Natural Swimming Pool 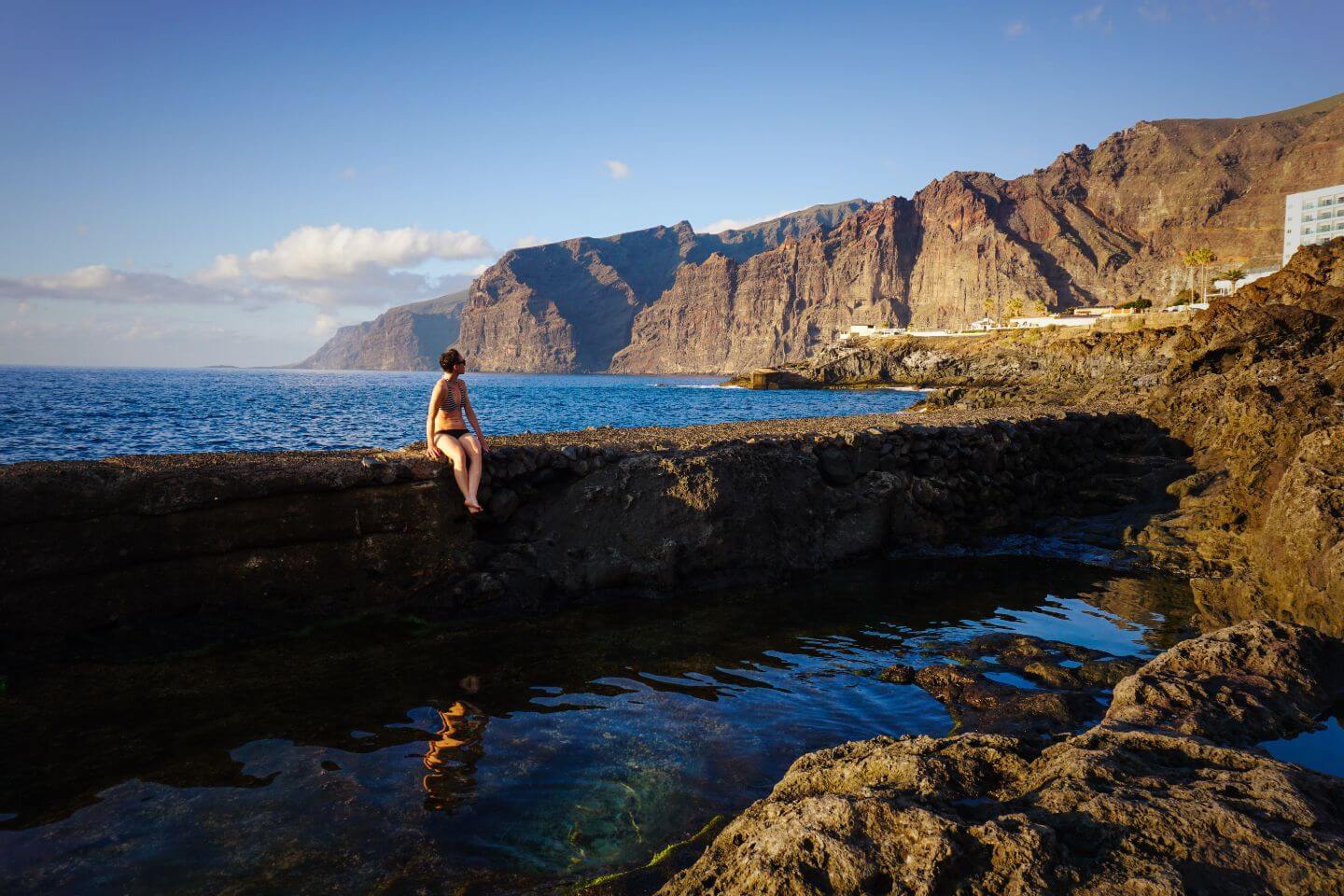 A nice alternative to swimming in the ocean is in a piscina natural. These pools provide a more sheltered and safe swimming experience. However, if the conditions are hazardous, these pools will be roped off. Our favorite natural pools in Tenerife are Piscina Natural Acantilado De Los Gigantes and Piscina natural Punta del Hidalgo.

Other natural pools in Tenerife: 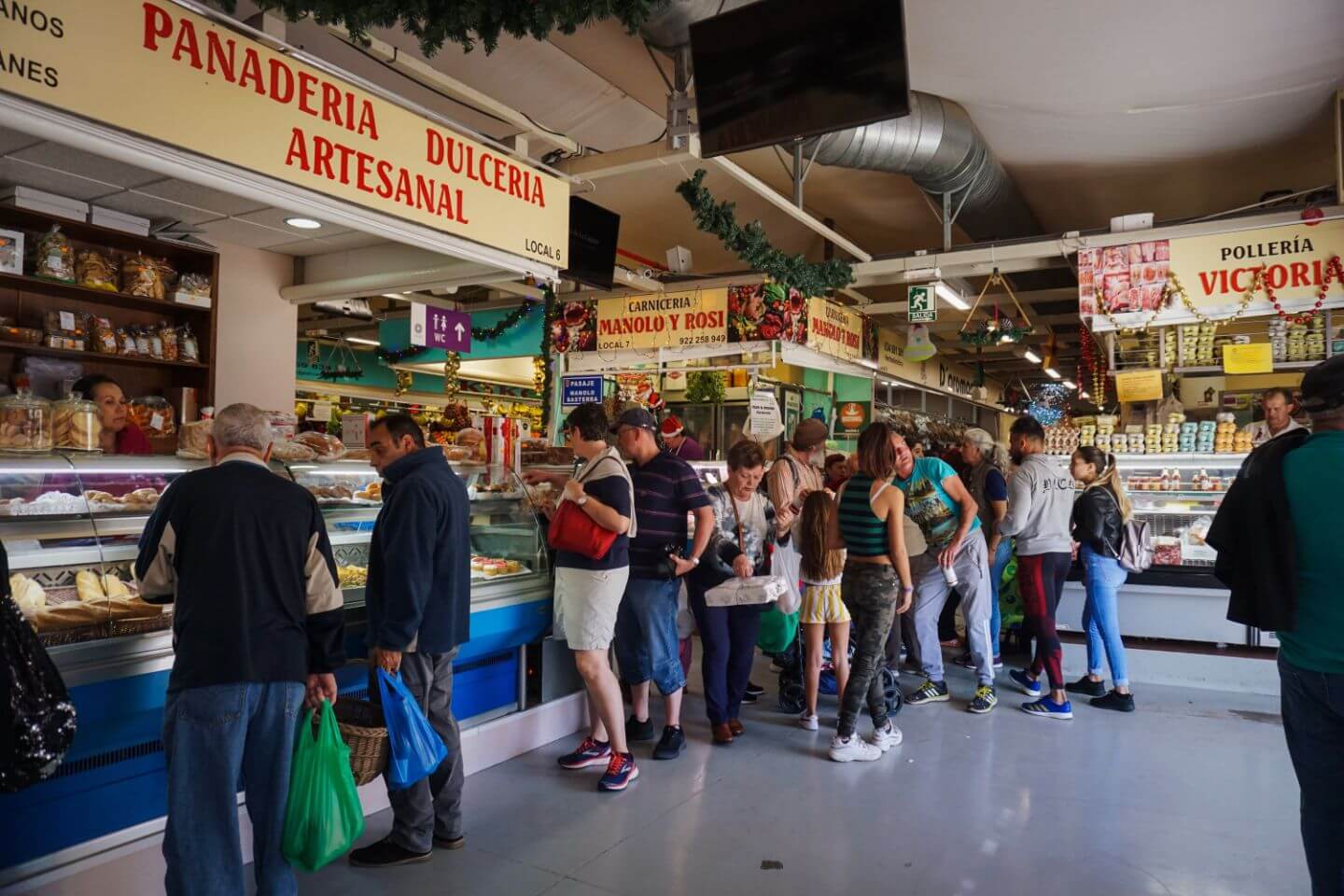 The Mercado Municipal de La Laguna is the most vibrant marketplace on Tenerife. This is a great place to buy fresh fruit and vegetables, dried herbs, local cheese and meat, and all things Canary. This is where locals shop, so you can expect very reasonable prices and a buoyant atmosphere. 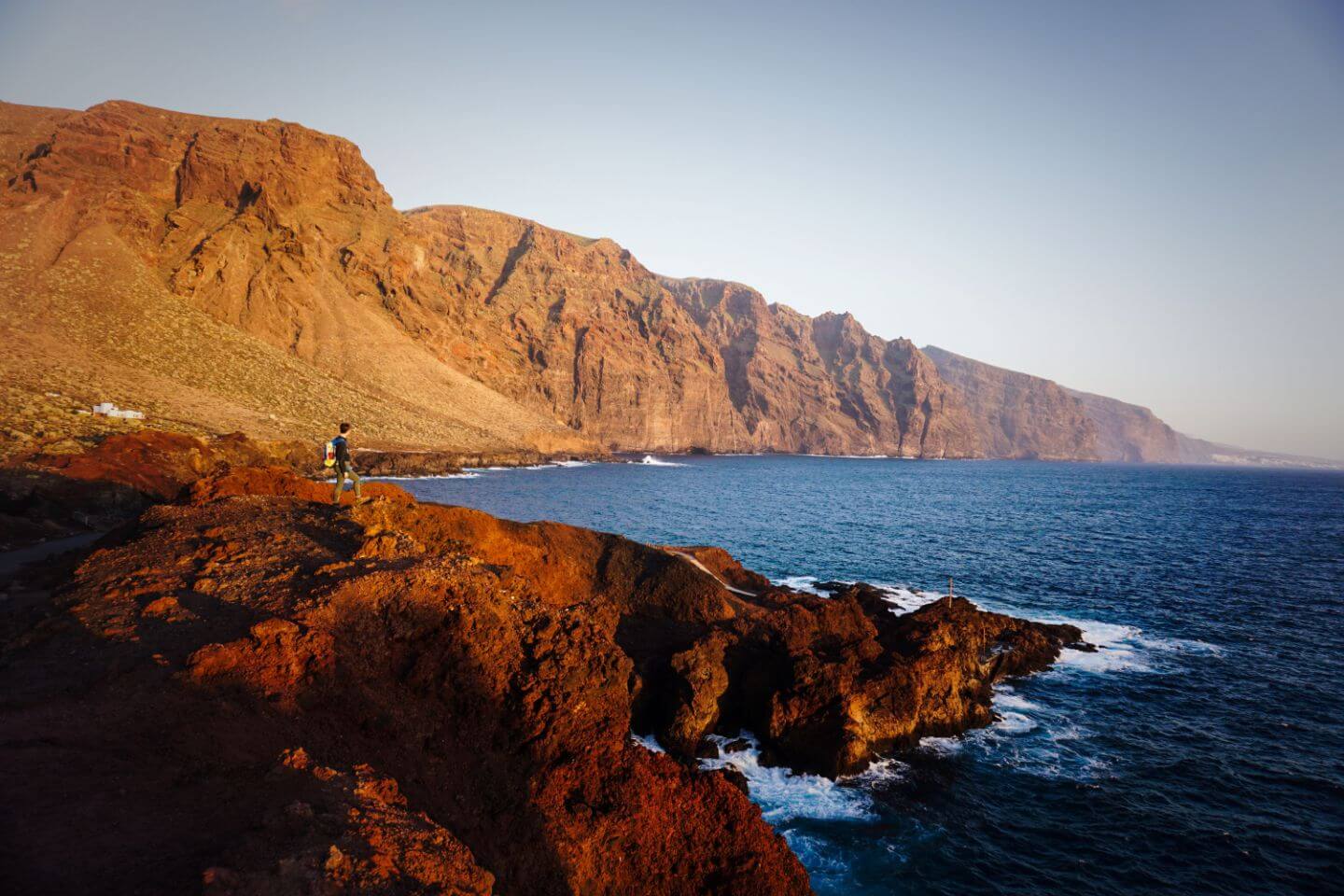 Getting to Punta de Teno requires a bit of planning, as the road to the point is restricted throughout most of the day. Use this Punta de Teno guide to determine whether you want to drive (at certain times), take the bus, or hike to Teno Point. 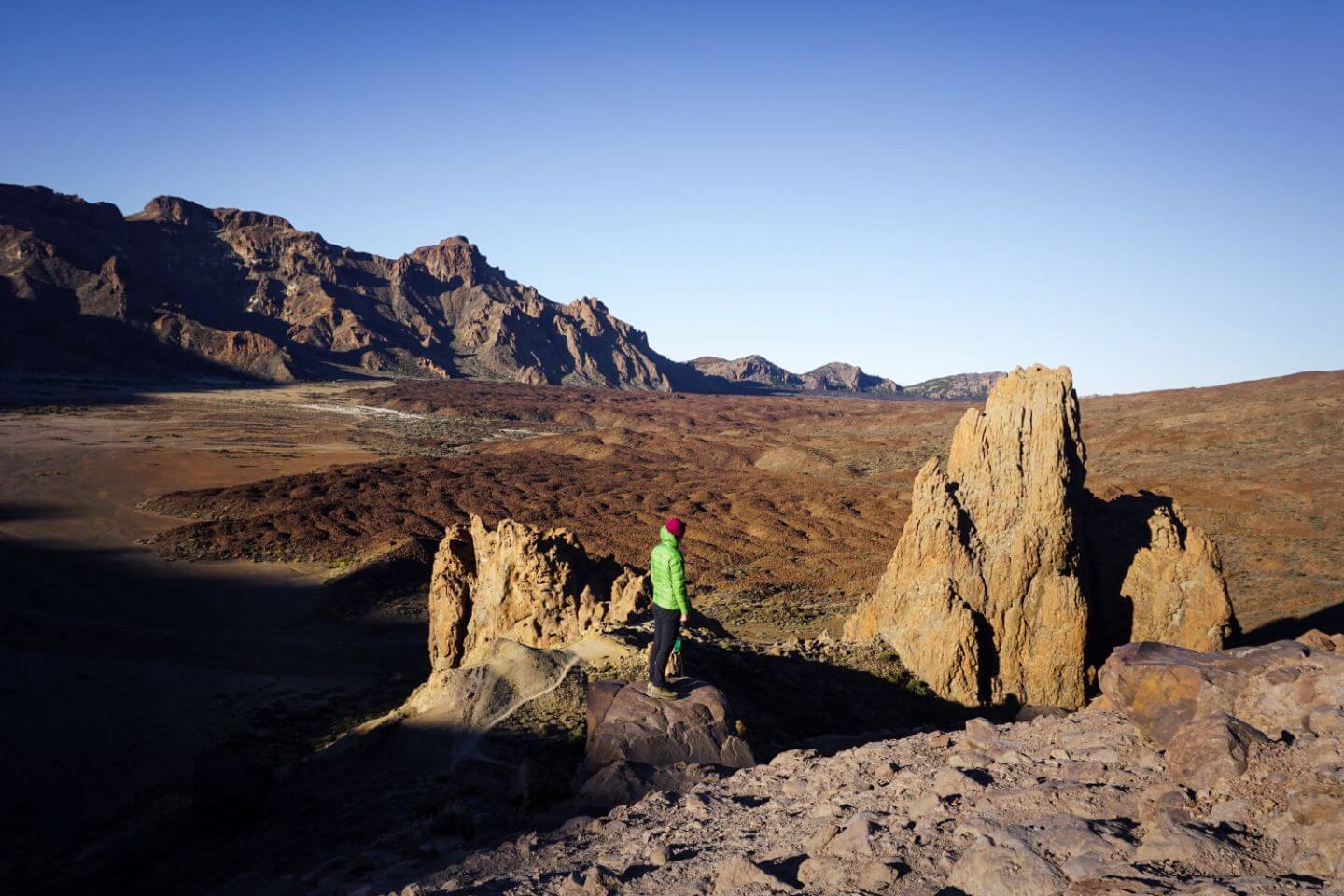 Roques de García is a fascinating rock formation located in the Las Cañadas del Teide caldera in Teide National Park. A relatively easy trail wraps around the rock formation, delivering spectacular and varied views of Mount Teide and the sculpture-like García rocks. The trail is 3.4 km and takes about 1:15 hours. Head to Mirador de la Ruleta to start the hike. 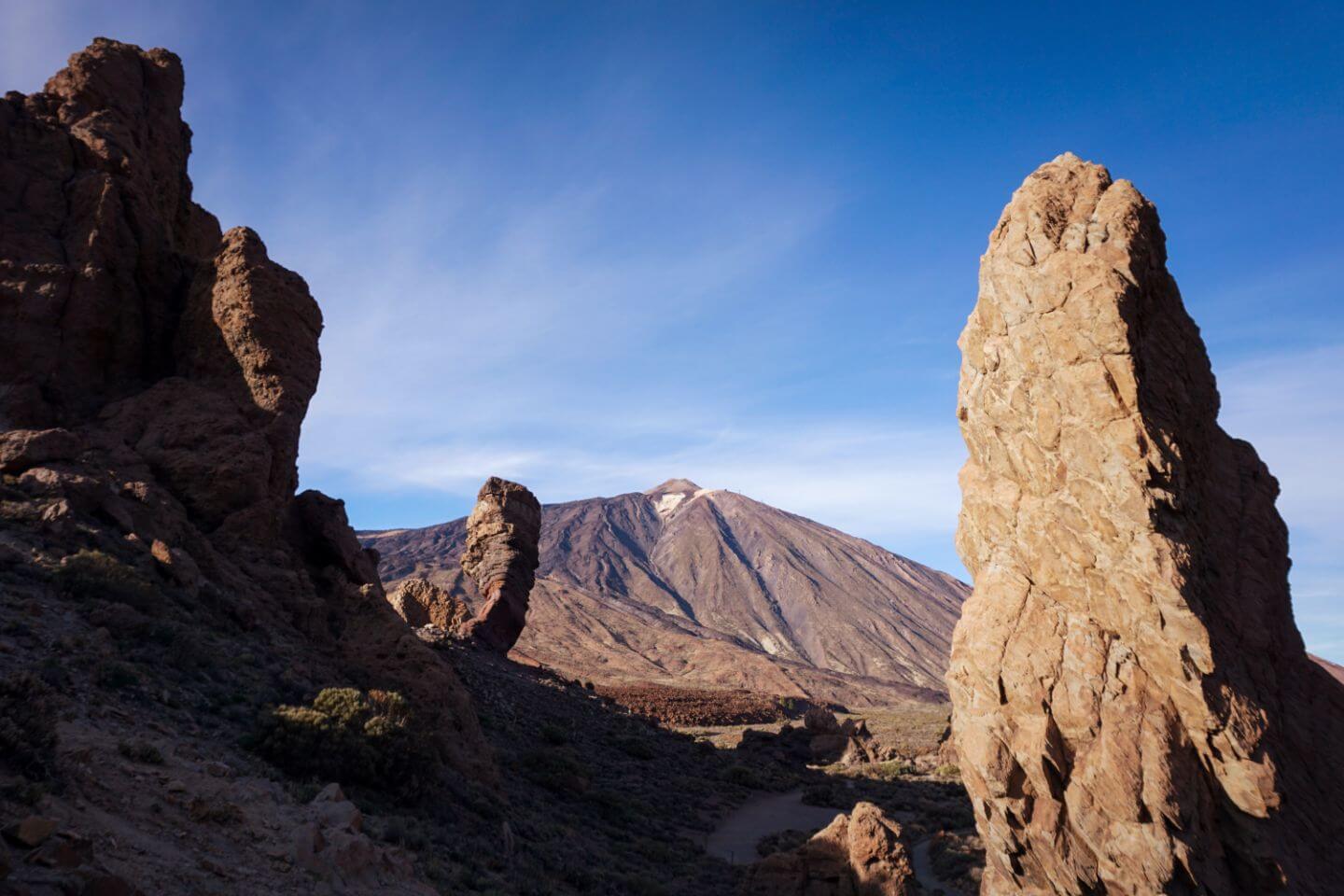 Mount Teide is the highest mountain in Spain. Reaching a lofty height of 3,718 meters, this imposing volcano is usually a bucket list item on people’s Tenerife itineraries. To summit Pico del Teide you need a permit, which you should secure as soon as possible (a few months before your arrival date). If you can’t get a permit, you can always book a guided tour like this one, which includes the permit. See all Teide guided tours.

7. Watch the Sunset at Los Gigantes 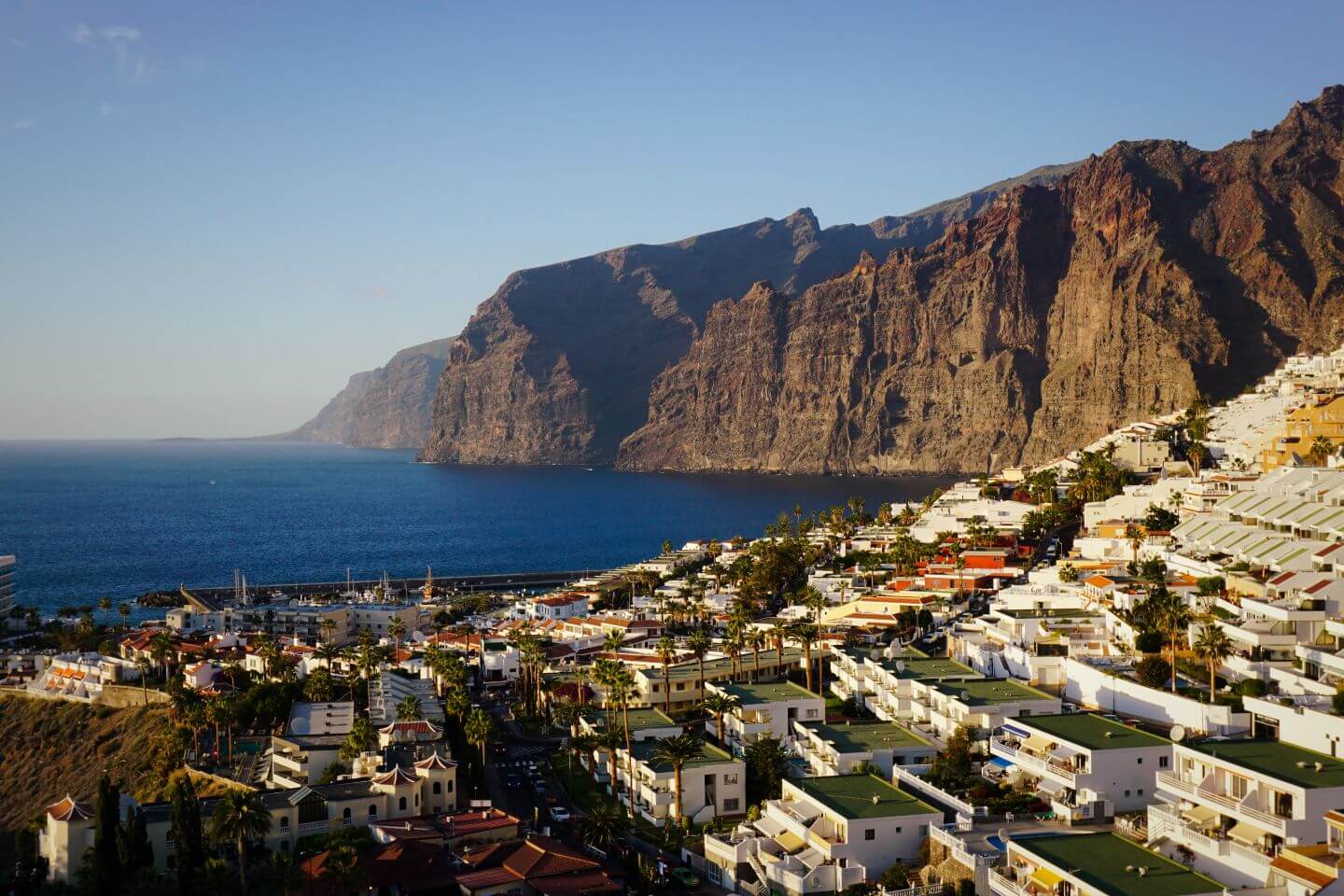 The best two places to watch the sunset in Tenerife are Punta de Teno and Los Gigantes. Both reward spectators with outstanding views of the Los Gigantes cliffs, which light up in shades of mahogany and crimson.

While watching the sunset at Punta de Teno can be a bit tricky, because of the road restriction, there’s nothing complicated about enjoying the sunset in Los Gigantes.

The best places in Los Gigantes to watch the sunset are Piscina Natural Acantilado De Los Gigantes and Mirador Archipenque. 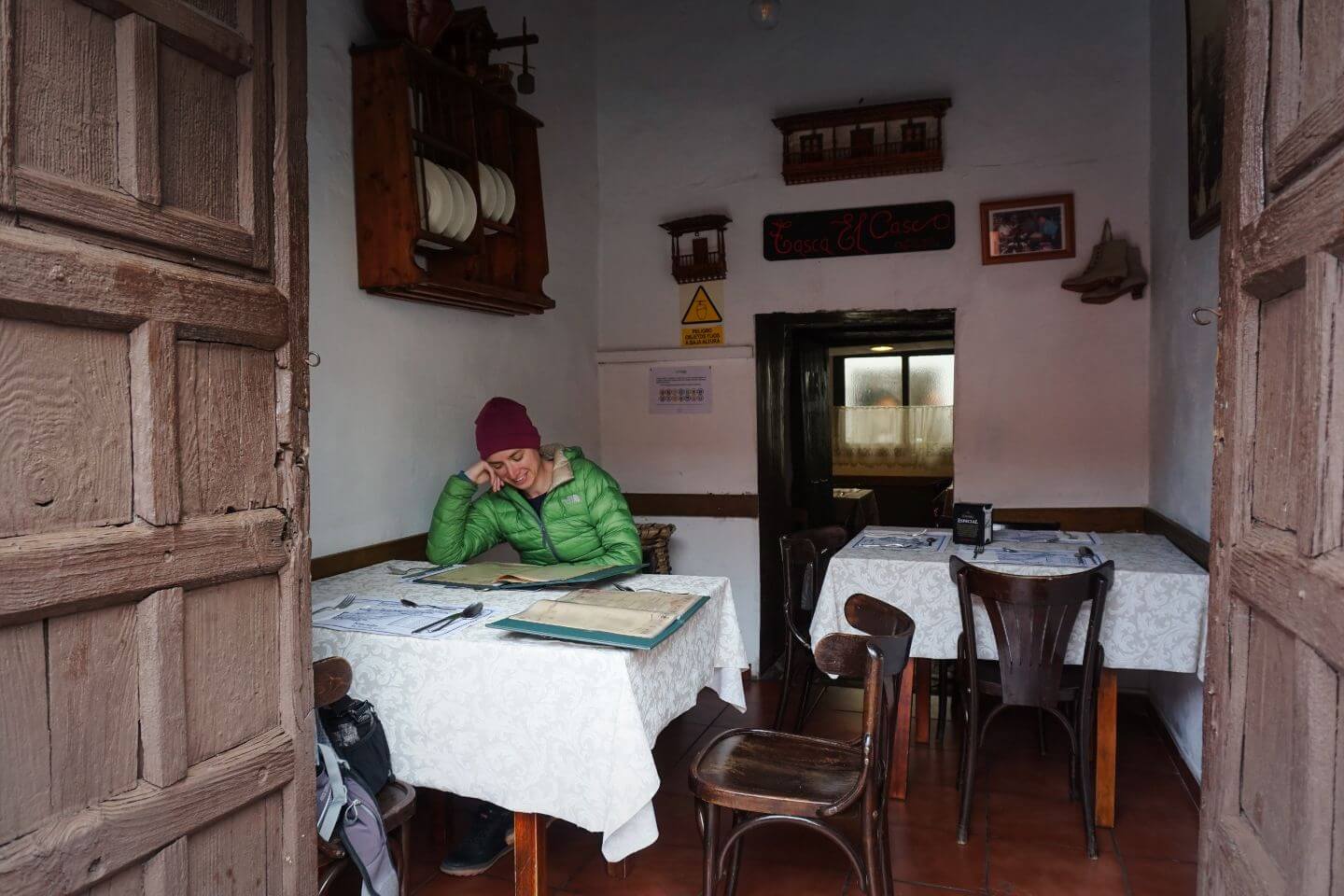 You’d think that finding delicious Canary food would be easy on the largest Canary Island, but sadly, it isn’t. Though our focus was primarily on hiking, we did find a few places we’d gladly return to. We’ve weaved these restaurants into our Tenerife road trip itinerary. Here’s a quick summary of our favorite no-frills Canary restaurants:

Masca Gorge is the best-advertised hike on the island. But, when we visited in January 2020, it was closed. A great alternative hike in the Teno Mountains is the ridge walk from Santiago del Teide to Masca.

This point-to-point hike is 8.4 km and takes 3 hours (at least). It took us a lot longer because the views are to die for. Read Hiking in the Teno Mountains for all the trail details and directions.

10. Soak Up the Sun at Playa de Las Teresitas and Playa Jardin 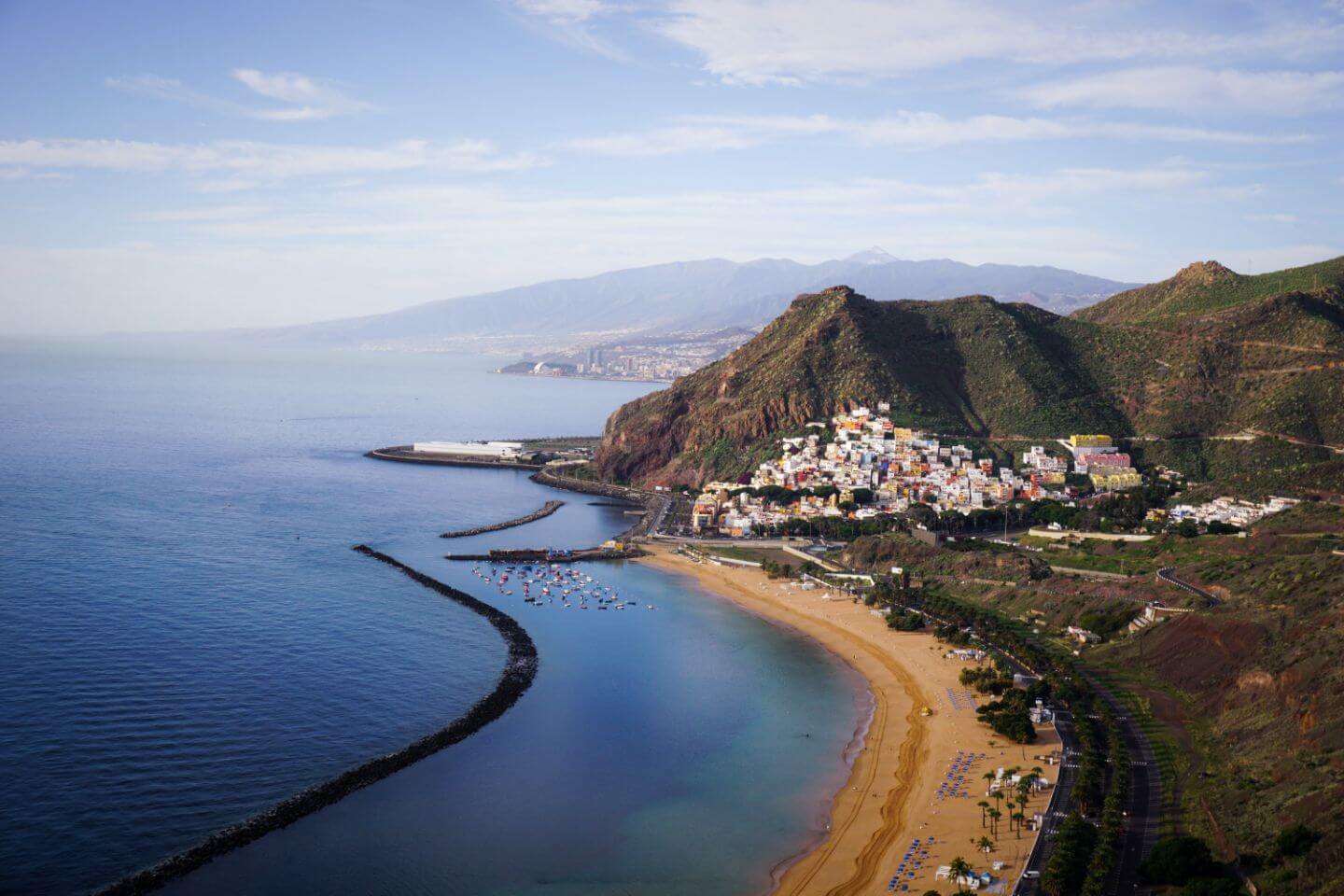 The South West Coast of Tenerife is where everyone goes when they want a beach holiday. The funny thing is that you won’t actually find Tenerife’s most beautiful beaches there. If you’re seeking out Tenerife’s most gorgeous beaches, you’ll need to head to the golden Playa de Las Teresitas just north of Santa Cruz, or the black Playa Jardin in Puerto de la Cruz.

Where to Stay in Tenerife in January 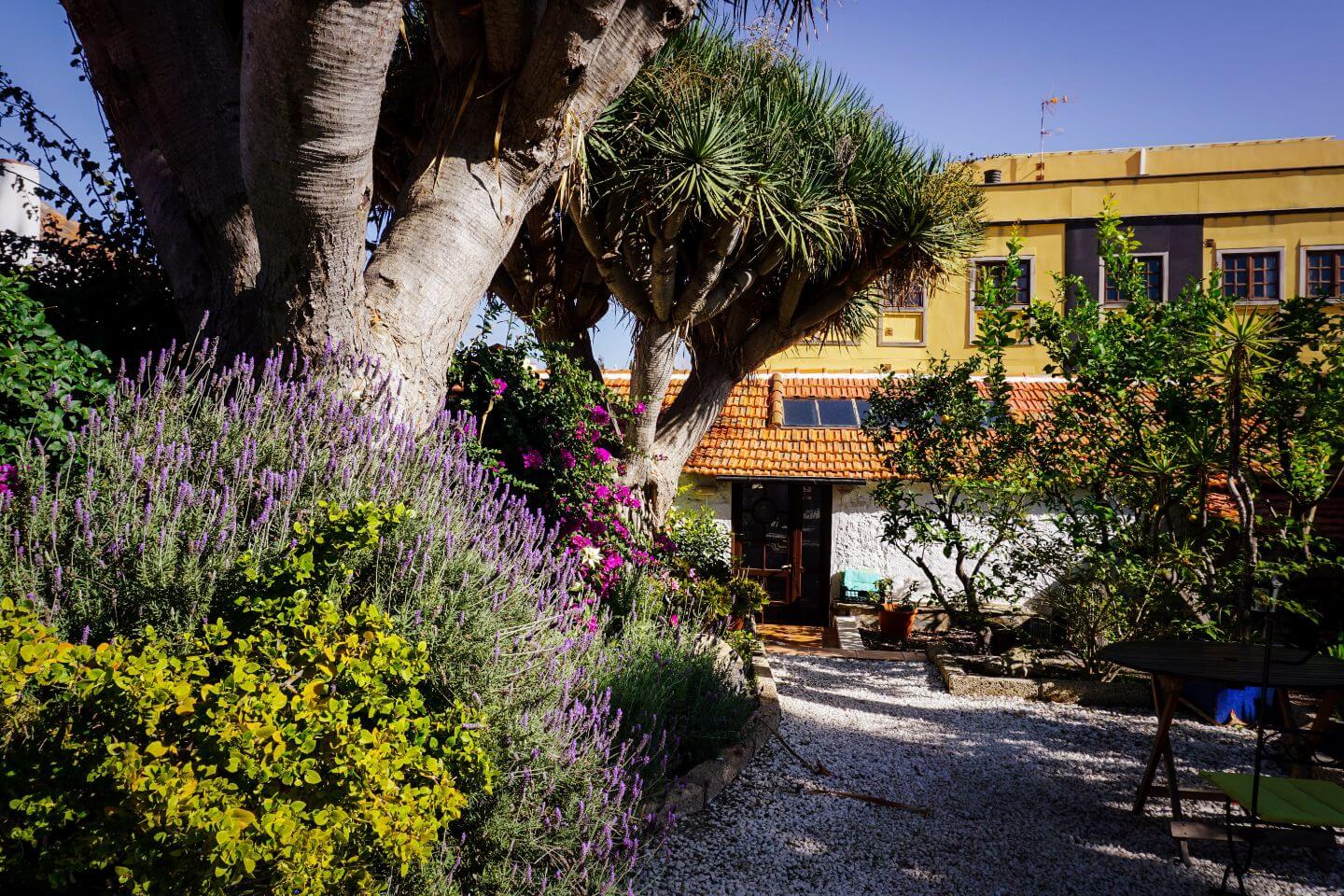 Stay in Los Gigantes or Buenavista del Norte when exploring the Teno Mountains.

The best base for exploring Teide National Park is Vilaflor, which is located a 30-minute drive away from the heart of the park. We stayed at Hotel Spa Villalba. If you want to stay directly in the park, check out: Parador de Las Cañadas del Teide.

We wrote a blog post on this topic: Where to Stay in Tenerife for Hiking

Base yourself in La Orotava and/or La Laguna if you want to stay somewhere that feels local, but also offers lots of dining and accommodation options.

Other places that you might like are Arona, Vilaflor, and Santiago del Teide. Keep in mind that January 1st and January 6th are holidays. All local restaurants and stores will be closed on both days. So if you want to stay in smaller villages and towns (like Arona, Vilaflor, etc…) during the first week of January, either stay in an apartment where you can cook for yourself on these holidays. Or, plan on driving to the closest tourist hub for food and meals.

What to Pack for Tenerife in January

In general, we packed way too many layers, expecting it would be a lot colder in Tenerife in January. That being said, it’s always good to have a warm sweater, especially if you’re staying in towns, situated at higher elevations. One thing we didn’t use once was our rain jacket.

On our next trip to Tenerife, we’d bring our Keen water shoes. Our exploration along the coast was limited because we didn’t have proper footwear. If you want to swim and explore lava pools around the Anaga Peninsula and the North Coast, water shoes are essential.

More Info for Your Trip to Tenerife: