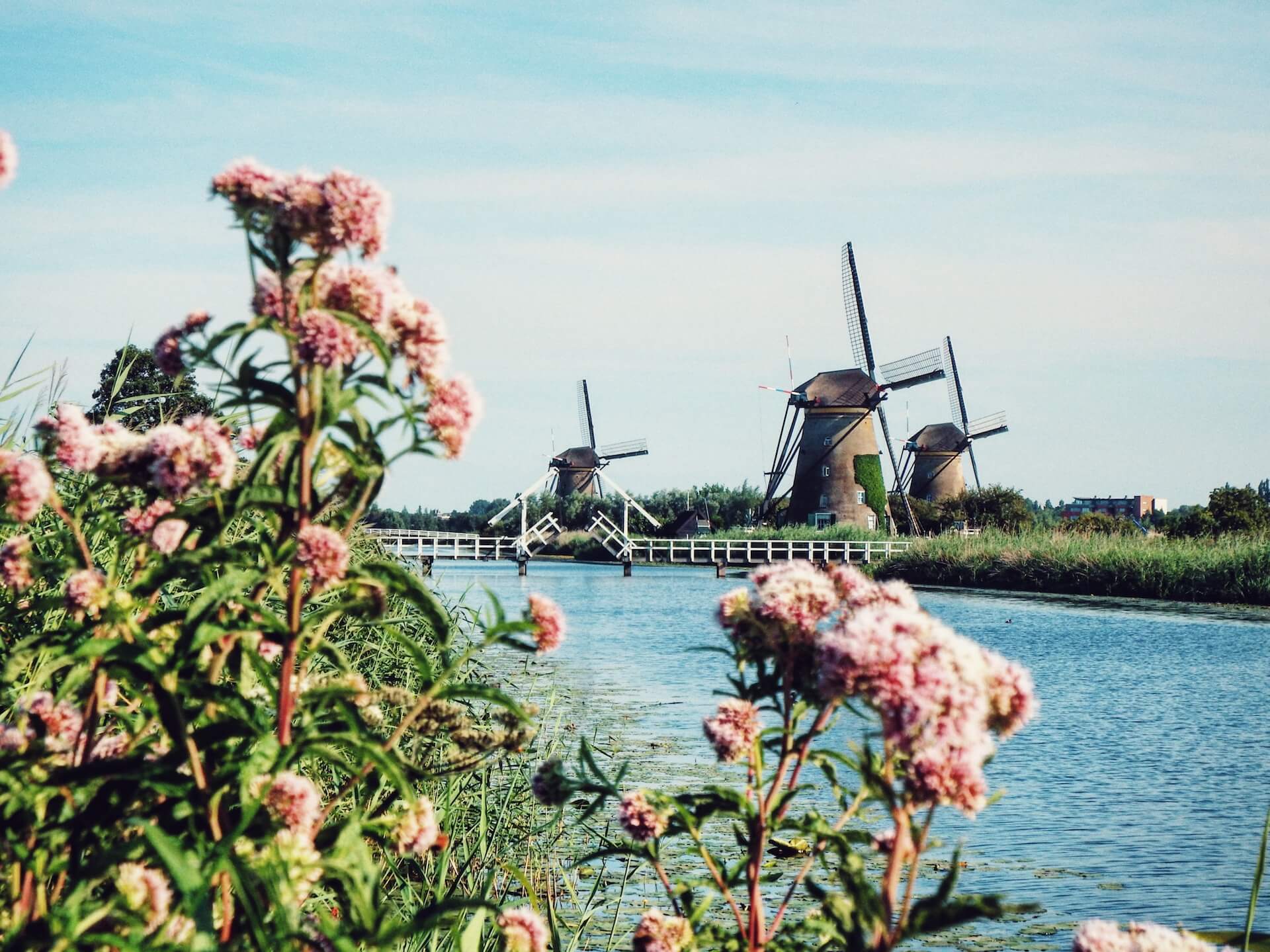 The Netherlands effortlessly enchants visitors with its picturesque landscapes, canal-ringed cities, and tulip fields. People come to Europe to be romanced, and the Netherlands more than outdoes itself in that department. Romance aside, this Northern European country is also fascinating in terms of its innovative water management systems. They say “God created the world but the Dutch created the Netherlands.” That saying speaks to how the Dutch people have shaped their landscape, by reclaiming land from the sea and keeping formerly unusable land (e.g. soggy peat bogs) dry through a system of windmills, pumps, ditches, sluices, and weirs. While thatched-roof windmills look almost decorative today, they were essential in keeping polder land dry for centuries, before steam, diesel, and electronically powered pumping systems were in use. We invite you to read on to discover the absolute best travel experiences to have in the land of tulips. 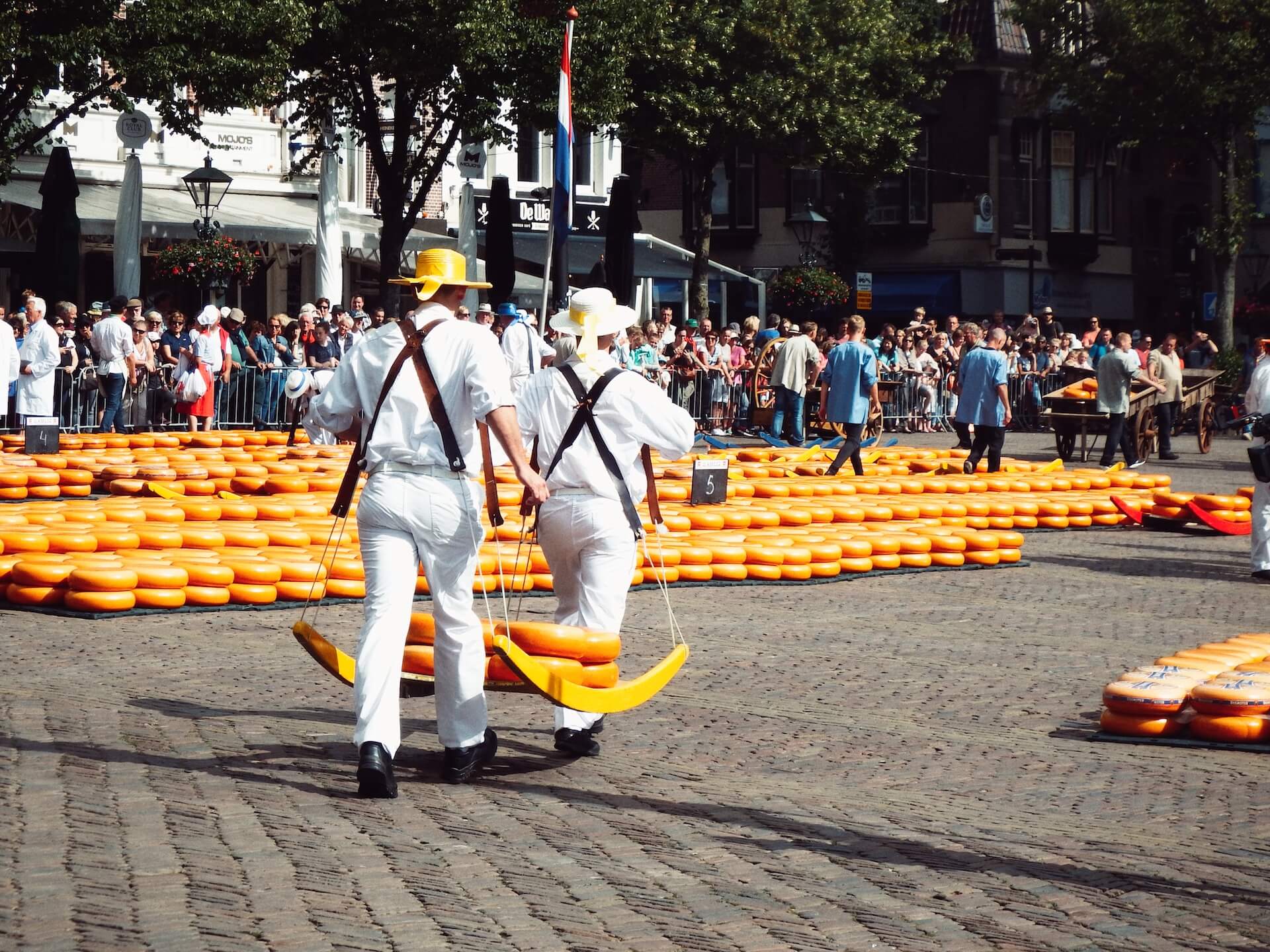 The country is called low (“nether”), because it’s literally the lowest country in Europe, with 26% of the country sitting below sea level.

Sometimes you’ll hear people use Holland and The Netherlands interchangeably. However, Holland is the region that encompasses the provinces of North Holland and South Holland. Historically, Holland contributed the most to the Kingdom’s economy, hence becoming the prevailing name to refer to the entire country.

Regions: The Netherlands is comprised of 12 Provinces.

Tipping Etiquette: Tipping is not required in restaurants, cafés, and bars. Dutch commonly round up to the nearest euro for small bills, and to the nearest two to four euros for larger bills.

Something Interesting: The Netherlands was the first country in the world to legalize gay marriage (2001). 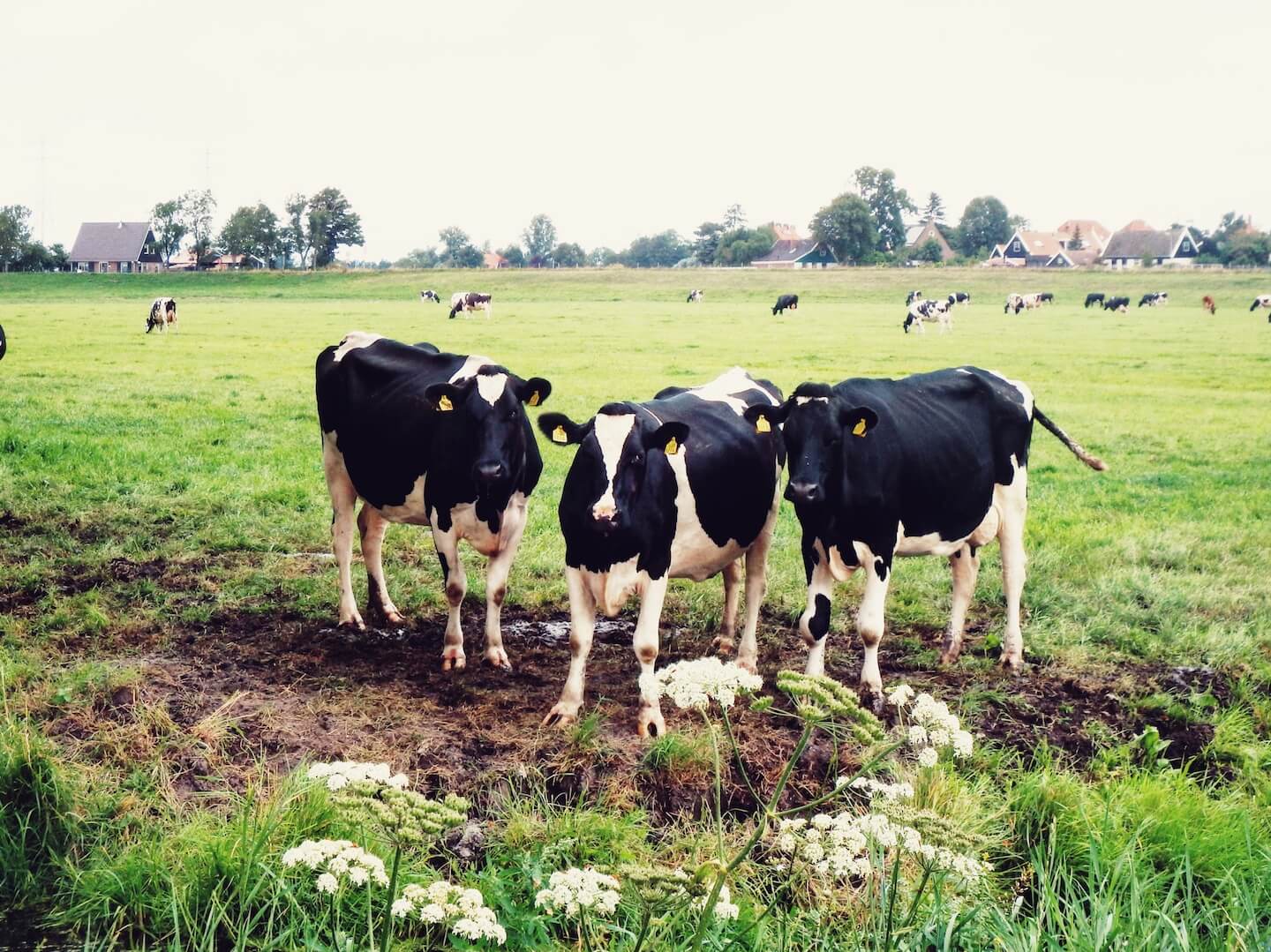 Where to Go in The Netherlands The windmill doesn’t care about the wind that came before. (Don’t worry yourself with the past)

What to Experience in The Netherlands

Alkmaar is a city in North Holland famous for its traditional cheese market, which has been taking place since 1365. Although the market functions as a tourist spectacle, it’s still cool to see. The market takes place on Fridays, between April and September, in front of the renaissance-style Weighing House (The Waag). You’ll see cheese-filled boats delivering cheese to the market. You’ll also see kassdragers (cheese porters), zetters (loaders), waagmeesters (weighers) playing specific roles at the market. Other towns that hold cheese market reenactments are Gouda and Edam.

Even if you’re not into cheese markets, we recommend coming to Alkmaar. From the narrow streets and canals to the crow-stepped gables and bridge cafés, there’s so much to fall in love with. Join a guided walking tour to learn more about this charming city.

Look for accommodation in Alkmaar.

Kasteel de Haar, the largest castle in the Netherlands

This grandiose medieval castle dates back to the 13th century but was restored between 1892 and 1912 for baron Etienne van Zügeln van Nijevelt van de Haar. The restoration was fully financed by Etienne’s wife Hélène de Rothschild, who was a member of one of the richest European families in the 19th century. Perhaps more interesting than the fine furnishings are the photos of the various family members on display. Hélène loved to host costume parties and dress in drag. She was a French socialite, poet, motorist, and a lesbian.

Surrounding the castle are 135 acres of land. As a visitor, you can walk through the various gardens and parks. We loved the rose garden, deer park, and the various pond-centered gardens.

Giethoorn, the village with no streets

Giethoorn is a car-free village in the province of Overijssel. Unfortunately, it’s not a secret. Even though we visited in high season (July), tourism was manageable. We biked into town in the late afternoon, ate dinner (Restaurant ‘t Achterhuus) next to a canal, and returned the next morning for a boat ride. Though you can see thatched-roof houses throughout the region, the ones in Giethoorn seem the most happily situated. Surrounded by flowers, gardens, and canals, these dreamy houses seem to invite you to read a novel under a willow tree.

There are no shortage of places to rent a boat from. We rented our boat from across the de krummte hotel restaurant (where there’s a parking lot). They provided a map of available routes. We opted for the two-hour boat tour, which was perfect.

If you don’t have a car to drive to Giethoorn, there are several guided tours available from Amsterdam.

We had a perfect stay in this Airbnb in Giethoorn.

Look for accommodation in Giethoorn.

The region that surrounds the Zaan River in North Holland, known as the Zaanstreek, was the industrial powerhouse of the Netherlands in the Dutch Golden Age. Windmills were constructed to harness the wind’s energy to grind spices, produce paint, saw wood and make oil. By the mid-1600s, about 900 windmills were in use along the Zaan river. Several windmills have been preserved and/or restored and can be visited in the Zaanse Schans, which is an open-air museum.

Even more striking than the windmills are the green timber buildings that characterize the region. Some houses are brick with impressive wooden facades, which have an almost headdress-effect on the house. However, most houses are timber with white window frames and terracotta roofs. The tradition of painting houses a particular Zaans green stems from the green paint itself, which contains copper and thus helps preserve the wood. It was also an easy paint to manufacture.

Another distinguishing feature of these houses is a white decorative pole, called a makelaar, that extends from the house facade. These makelaars vary in size and ornamentation. The level of decoration corresponds to the wealth of the owner. Supposedly, the bigger the pole, the closer the owner is to the almighty. We asked several people what the makelaars are, and we received different answers each time. Several locals told us that the makelaars were believed to be magical and served as a protection against evil spirits.

Learn more about Zaanse Schans in this short walking tour.

Recommendation: Explore the town Zaandijk (opposite Zaanse Schans) and the Domineestuin neighborhood, which has a high concentration of old wooden houses along narrow ditches.

Look for accommodation near Zaanse Schans.

Rotterdam is the second largest city in the Netherlands and the largest port in Europe. In WWII, Rotterdam was completely destroyed by German bombers in an aerial attack that lasted 15 minutes. When it came time to rebuild, Rotterdam made the decision to embrace modernity. With a cityscape that looks like a playground of exotic shapes, Rotterdam is a fascinating place to visit.

We recommend hopping on a bike and cycling through the city to discover Rotterdam’s playful and cutting edge architectural landscape. Bike lanes are clearly defined and not as crowded as other Dutch cities. Just remember that motorbikes and bicycles share the same bike lanes.

Join this tour to learn more about the stunning architecture in Rotterdam.

Look for accommodation in Rotterdam.

Walking in the footsteps of Johannes Vermeer

The canal-ringed city of Delft was the birthplace of the genre painter, Johannes Vermeer. Unfortunately, there are no original Vermeer paintings in Delft today. Nonetheless, there is an excellent museum (Vermeer Centrum Delft) that exposes the painter’s life and his techniques. There’s also a really interesting film about the restoration process of the painting: Women in Blue Reading a Letter. The top floor is completely dedicated to decoding Vermeer’s symbolic love messages. For example, Vermeer used a broom to showcase moral purity. He painted a feather headdress to communicate frivolity and a cittern (small lute) to convey eroticism.

Beyond Vermeer, the city itself is delightful to explore. As you walk over small bridges that connect café lined streets, you’ll quickly see that Delft has a lot to offer. The city is lively and young and there are no shortage of places to eat and drink.

If you like pottery, head to the Royal Delft factory and museum to learn about Delftware. That’s the blue-and-white pottery that emerged in the 17th century when artisans started to copy Chinese porcelain. Royal Delft is the only remaining earthenware factory in Delft dating back to the 17th century.

Look for accommodation in Delft.

Kinderdijk is a village in South Holland known for its 18th-century windmills. Situated on a polder (reclaimed land), these 19 windmills were built to pump the water out to keep the low-lying lands of the Alblasserwaard dry. The windmill complex is also a UNESCO World Heritage Site.

There are free walking and bicycle paths that run parallel to the windmills. Although we loved walking around the lily-laced canals, we would definitely bike next time. The countryside that surrounds the windmills is stunning and peaceful – meriting more than a quick visit.

If you do not plan on renting a car, a guided group tour leaves daily from Amsterdam.

Biking through fields of bursting red, orange, and pink tulips is an unforgettable experience (even when it’s freezing). In April and May, Lisse is the perfect place to visually relish Holland’s blooming tulips fields. We spent half-a-day biking a circular route from the Keukenhof Gardens, through the surrounding tulip fields, and to the Dunes of the North Sea. Get your Fast-Track Ticket (including transfer from and to Amsterdam) to the Keukenhof Gardens here.

Look for accommodation in Lisse.

Leave it to the Dutch to convert churches to bookstores, beer cafés, and breweries. Most deconsecrated churches end of disappearing from the public realm. They often get converted into private homes or condos. But, in the Netherlands, many of these churches are given a new life and serve as a community space. We visited the Belgian Beer Café Olivier in Utrecht and the Jopenkerk Brewery in Haarlem, both of which are housed in old churches.

Here are a few other converted churches:

There is a simultaneous feeling of movement and stillness in the streets of Amsterdam. As you walk along the canals flanked with rowboats and houseboats, you are surrounded by leaning houses, gabled roofs, potted plants, romantic bridges, and bicycles. The historical city center seamlessly blends the old with the new, resulting in a dynamic street life that is animated with bicycle traffic, bustling cafés and restaurants, charming boutiques, galleries, and cannabis coffee shops. And yet, you can also find areas that are quiet and untraveled. There is something irresistible about this city that beckons you to return again and again.

Look for accommodation in Amsterdam. 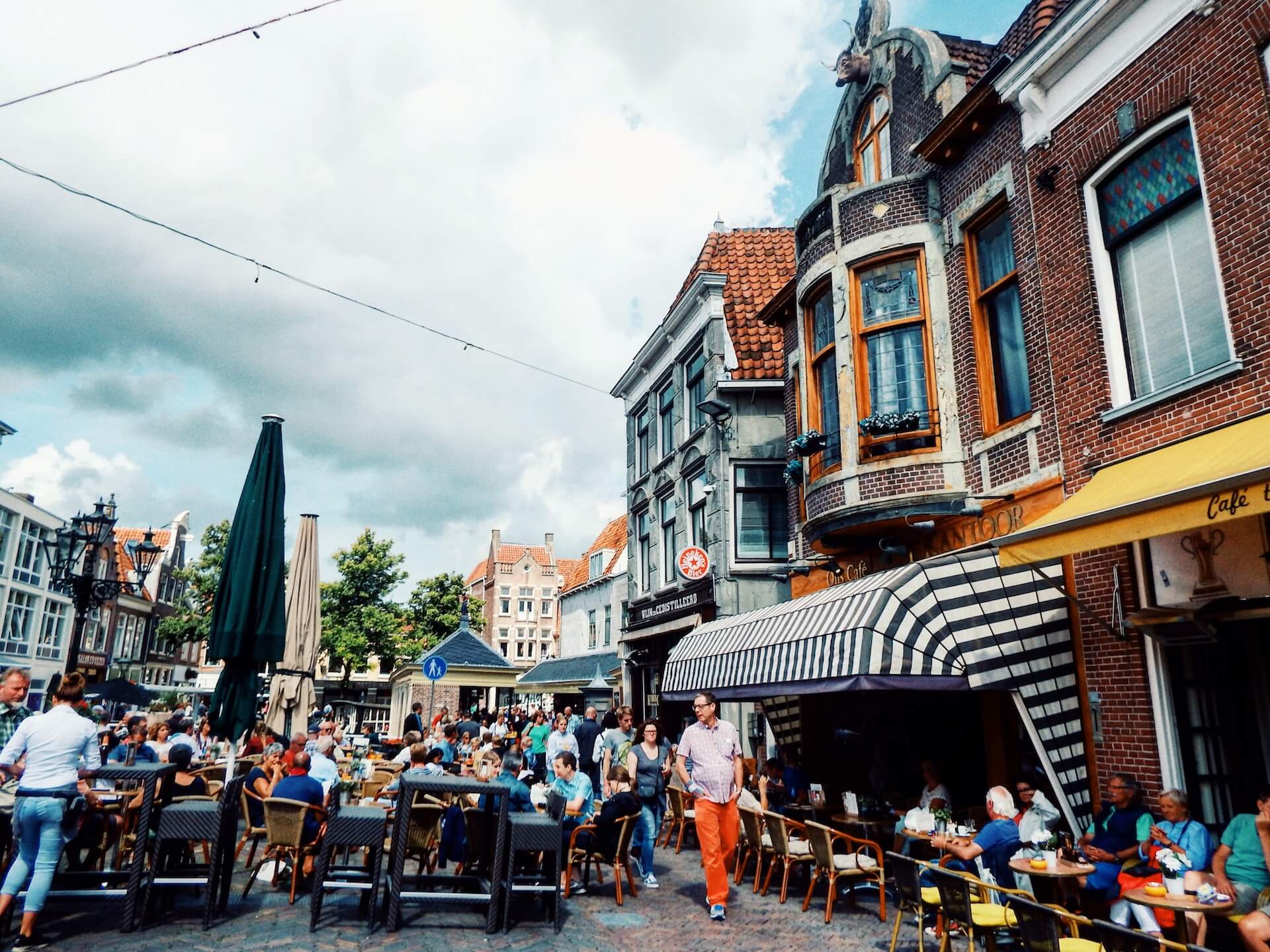 What to Eat & Drink in the Netherlands

Gouda is a Dutch yellow cheese made with cow’s milk. It’s named after the city of Gouda, because the cheese was historically traded there. In the Middle Ages, Gouda obtained market rights on cheese, which meant that farmers could only sell their cheese product in the city of Gouda.

Raw beef sausage, traditionally made with ox meet. We ordered this on accident (can’t say we loved it). 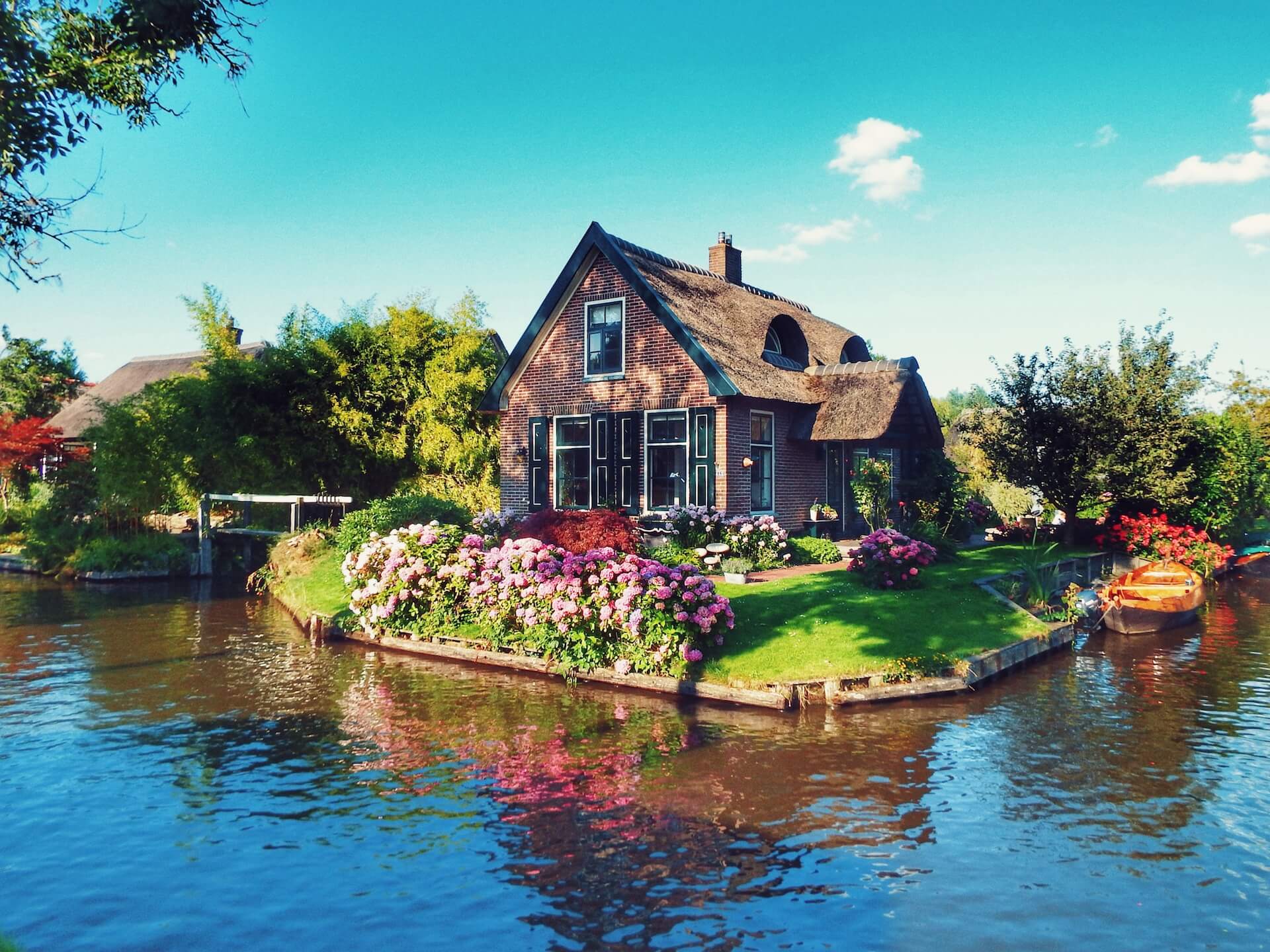 We did this road trip in mid-July. We rented a car in Cologne, Germany (where we were living at the time) and started and ended there. This trip gave us a good overview of the country, but it was fast. If possible, add more time to the picturesque region north of Amsterdam (Waterland, Zaan, and Kop van Noord-Holland). And, if you like to cycle, add time for a full-day, or multi-day cycling trip.

This is a skeleton itinerary. To learn more about each destination, read our Experiences.