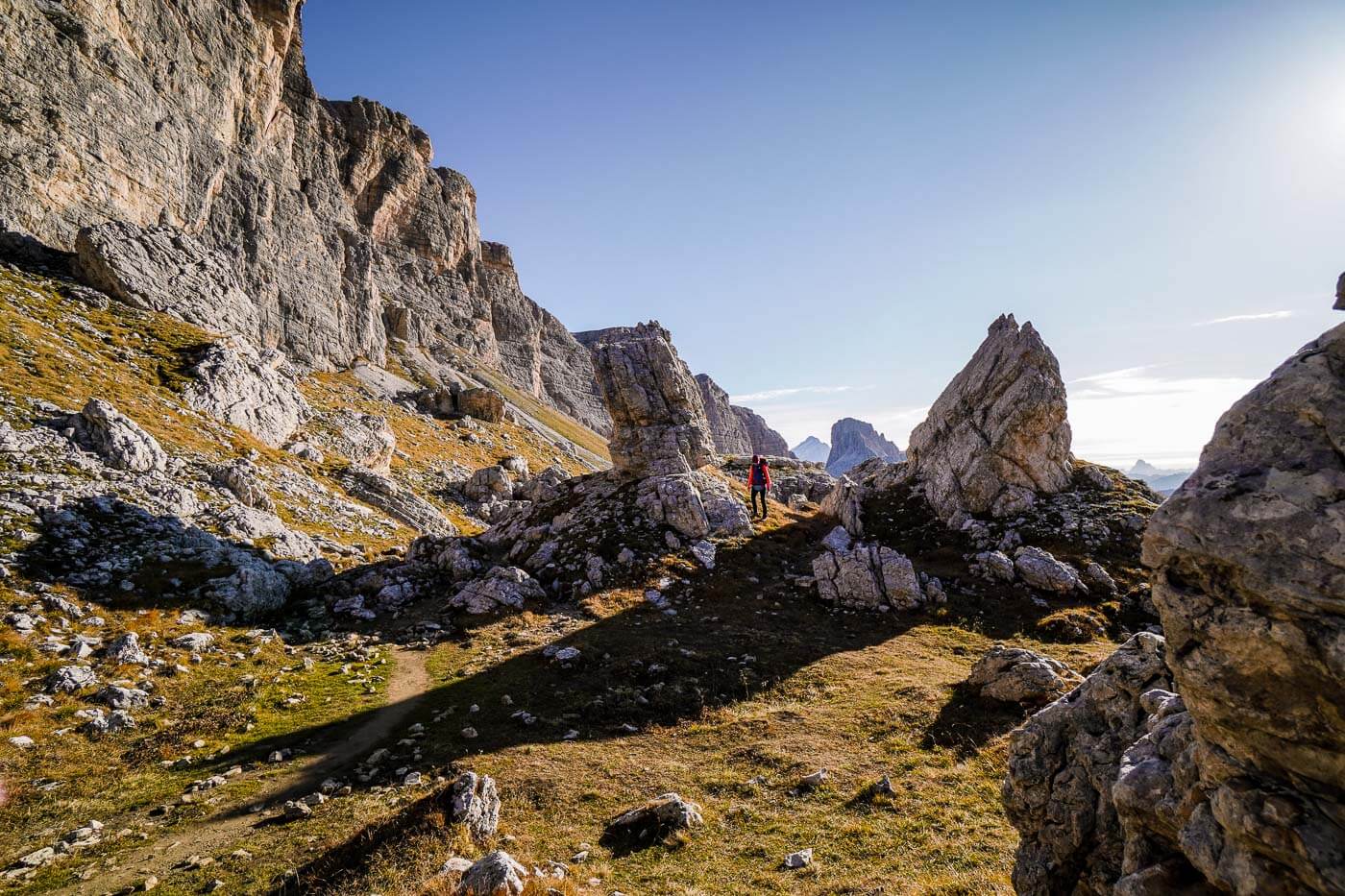 By Sabrina Brett
Nov 28, 2021 Leave a comment
in Dolomites,Europe,Italy

Mondeval is a bowl-shaped plateau in the municipality of San Vito di Cadore within the Dolomites UNESCO System Pelmo – Croda da Lago. Its height ranges from 2100 to 2360 meters.

You can hike to Mondeval from Passo Giau (along the Alta Via 1), from Lago Federa (along the Croda da Lago Circuit Hike), and from Selva di Cadore.

The Mondeval plateau is located high above Selva di Cadore in the Italian Province of Belluno.

It’s bounded by the rock walls of Lastoni di Formin (Lastoi de Formin in Ladin) to the north, Croda da Lago, Becco di Mezzodi, and Col Duro to the northeast, and the slopes of Monte Cernera and Monte Mondeval (Corvo Alto) to the southwest.

How to Get to Passo Giau

Passo Giau (2236 m) is a high mountain pass in the Italian Province of Belluno. It connects Cortina d’Ampezzo with Selva di Cadore and Colle Santa Luci. It’s especially scenic, because of its eye-catching location at the base of Ra Gusela (Averau-Nuvolau group). From Giau Pass, there are also great views of Tofane Group, Croda Rossa d’Ampezzo/Hohe Gaisl, Cortina at the base of the Cristallo Group, the Sesto/Sexten Dolomites.

The easiest way to get to Passo Giau is with your own vehicle. You can park along the road at the pass. Parking is free, but limited.

From Passo Giau, follow trail 436 in the direction of Forcella Giau/Mondeval/Rifugio Palmieri – the opposite direction of the captivating Ra Gusela tower. A level, dirt footpath leads to Forcella di Zonia (2229 m).

This flat trail continues across the western slopes of Col Piombin to Forcella Col Piombin (2239 m), where there’s a turn-off to Monte Cernera. Continue straight on trail 436 to Forcella Giau.

The trail cuts across the high Val Cernera valley towards the block-shaped Lastoni di Formin. Though this undulating path is easy, there are some rocky passages, which are potentially slippery, because of the polished stones.

Trail 436 continues straight along the vertiginous walls of Lastoni di Formin to Forcella Ambrizzola (which is also the AV1). That’s the route you’ll return on.

From Forcella Giau, bear right and then descend along the unmarked but well-trodden footpath towards the cluster of boulders and Lago delle Baste.

If you’re looking at the Tabacco 03 Cortina d’Ampezzo, it’s the black-dotted route that leads to the summit of Monte Mondeval. Note: it’s delineated in black dots because it’s unmarked, not because it’s difficult.

The start of the trail is not obvious. However, you’ll see the tiny Lago delle Baste off to the right at the base of grassy Monte Mondeval. Rising behind this splash of water is the commanding Pelmo massif.

Lago delle Baste is surrounded by a sensitive marshy area. Please don’t trudge across the grasslands. If you want to walk to the lakeshore, follow the stone footpath.

Lago delle Baste isn’t a significant lake: it’s basically a big pond. However, it serves as a lovely, watery foreground for both the Lastoni di Formin rock wall as well as Monte Pelmo.

Our next goal is the summit of Monte Mondeval (aka Corvo Alto), which is the grassy, slanted slope rising above the plateau to the south.

To reach the summit, follow the western ridge. Ignore the footpaths that lead left, away from the ridge. Stay on the ridge path: it’s the most direct and well-defined trail to the summit.

Follow the ridgepath back down to Lago delle Baste.

From the lake, head east across the meadows towards the thumb-shaped Becco di Mezzodi. You’ll hike through Malga Mondeval de Sora (unmanaged) marked by two stone structures: a hut and a shed. On the shed, there’s a trail sign pointing you towards Forcella Ambrizola.

Follow this trail to the burial site of a Mesolithic Hunter, known as the Grave of Mondeval de Sora. This site is labled as “Sepoltura mesolitica” on trail maps. It’s situated at an elevation of 2150 meters and marked by an info board, next to a large boulder.

Around 10,000 years ago, Mesolithic hunters seasonally trapped and hunted ibex and deer on the Mondeval Plateau, by blocking off the passes.

Archaeologists have unearthed charcoal, bones of hunted animals and flint tools around this site. They also excavated the skeleton of a 40-year-old Cro-Magnon male, the Man of Mondeval, who was laid to rest beneath this overhanging boulder in a ritualized burial. In this tomb, they also excavated a harpoon (spear) and a necklace of canine deer.

The archaeological finds of this site are on display at the Selva di Cadore Museum in Val Fiorentina.

From the burial site, continue east towards Becco di Mezzodi.

Note: you can also shorten the Mondeval loop by following the left path towards Lastoni di Formin. This path takes you to trail 436. When you reach the main trail, turn left and hike back to Forcella Giau.

When you reach the “Mondeval de Sora” trail intersection, turn left on trail 466 in the direction of Forcella Ambrizzola.

The trail ascends gently towards the magnificent Spiz de Mondeval, a prominent peak of Lastoni di Formin, and Cima Ambrizzola, the highest peak of the Croda da Lago mountain chain.

When the trail seems to divide, take the upper footpath along a small crest, left of the creek.

Note: If you want to detour to Lago Federa and Rifugio Croda da Lago, head right to Forcella Ambrizzola and descend 2.2 km along trail 434 to Lake Federa.

The trail moves steadily towards Spiz de Mondeval along a mostly level path. As you near Lastoni di Formin, the grassy meadows are increasingly punctuated with fallen boulders.

Parallel to the south, vertical walls of Lastoni di Formin, trail 436 ascends along a creek to Forcella Giau.

Return to Passo Giau along the same route.

Where to Stay near Passo Giau

Pocol is a tiny village above the Ampezzo Valley, west of Cortina d’Ampezzo. Pocol sits at the crossroads between SR48 (the road that connects Cortina with Passo Falzarego) and the SP638 (the road that connects Cortina with Passo Giau). If you’re planning on doing a lot of hiking around Falzarego Pass, Lagazuoi, Tofane, Cinque Torri, Croda da Lago, and Passo Giau, Pocol is a great base.

Budget | Hotel Piccolo Pocol is a basic, but very clean bed & breakfast in Pocol. The management is helpful, efficient, and knowledgeable about the region. The breakfast buffet features a number of cakes, croissants, breads, yogurts, sliced cheeses and meats, and of course coffee and juices.

Budget | Jaegerhaus Agriturismo is a highly-recommended farm stay in Cortina d’Ampezzo. The farm is located 2 km north of the town center in a dreamy location, facing Punta della Croce and Croda del Pomagagnon. Expect a delicious breakfast buffet. You can also eat dinner in their restaurant, which features ingredients sourced directly from their farm. Rooms are clean, cozy and designed in an alpine-rustic style.

Midrange | Camina Suite & Spa is a modern and stylish accommodation, managed by a caring and kind staff. Highlights of staying here are the bright, spacious suites, lovely furnishings and design accents, balcony views, and air conditioning. The breakfast is outstanding. Don’t miss out on their spa facilities (may need to be booked in advance due to COVID regulations).

Look for accommodation in Cortina d’Ampezzo.

More Hikes in the Dolomites

Plan your trip to the Italian Dolomites

Where to Stay in the Dolomites

Our Favorite Destinations in the Dolomites