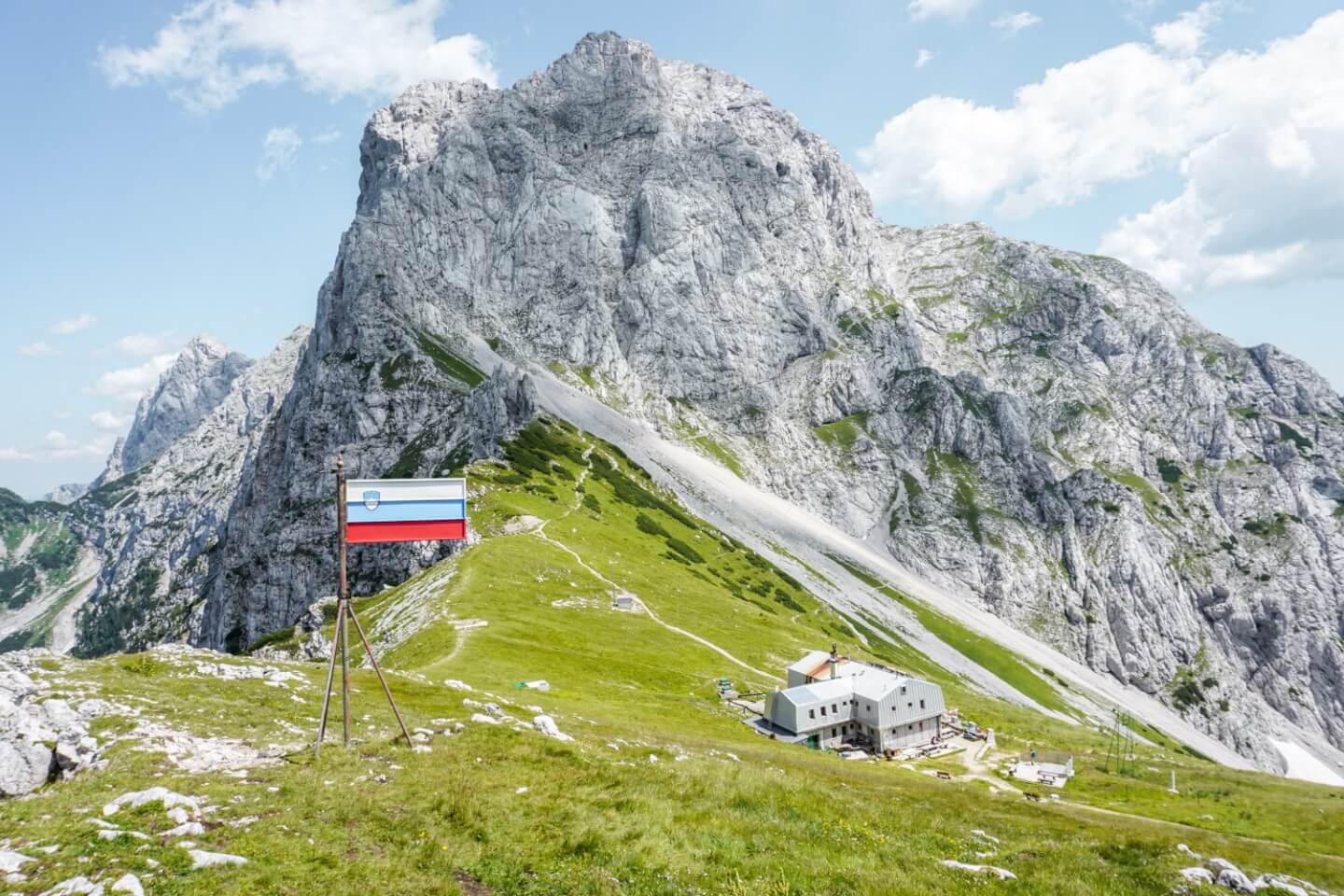 Hiking across the Kamnik-Savinja Alps, Slovenia

The Kamnik-Savinja Alps (aka Kamniško-Savinjske Alpe, Steiner Alpen) are a stunning mountain range in Slovenia. Located only 1:30 hrs north of Ljubljana, this alpine paradise is accessible by car, or by public transit.

In July, we hiked hut-to-hut for four days in the Kamnik-Savinja Alps, starting in Kamniška Bistrica and ending in Zgornje Jezersko. Much of our route followed the Slovenian Mountain Trail (marked with the number “1”), a 599 km long trail that takes 28 days to complete. We were blown away by the incredible beauty of these limestone mountains. We were also astonished by how few people were actually on these trails. Compared to the Julian Alps, the Kamnik mountains are far less trafficked.

Our 4-Day hiking tour was a challenging trek. If you have high-alpine hiking experience and proper equipment, this is definitely a hike for you. If you love the mountains but aren’t thrilled about assisted climbing routes, consider hiking stage 1 and, or stage 4 of this guide as day hikes. Also, check out our Triglav National Park trek in the Julian Alps.

This hiking guide outlines each stage of our trek through the Kamnik-Savinja Alps. We’ve also included tips on how to save money, what to pack, and where to stay.

Traveling to Slovenia? Read these helpful guides next: 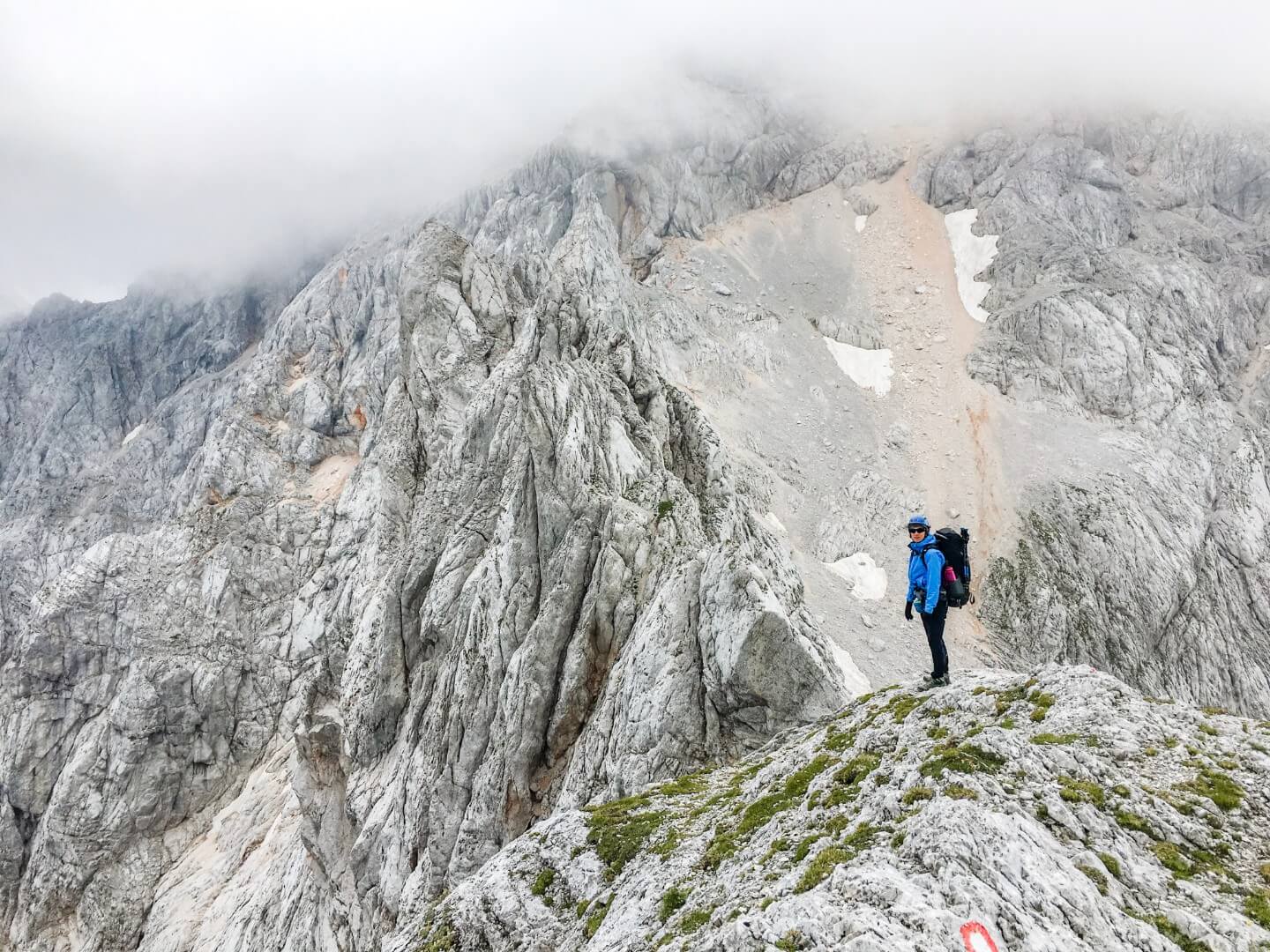 Where are the Kamink-Savinja Alps?

The Kamnik-Savinja Alps (Kamnisko-Savinjske in Slovenian) are located in Northern Slovenia, close to the Austrian border. They make up the south-easternmost part of the Alps and the southernmost part of the limestone alps. These mountains are also known as the Steiner Alpen, or Steiner-Sanntaler Alps. 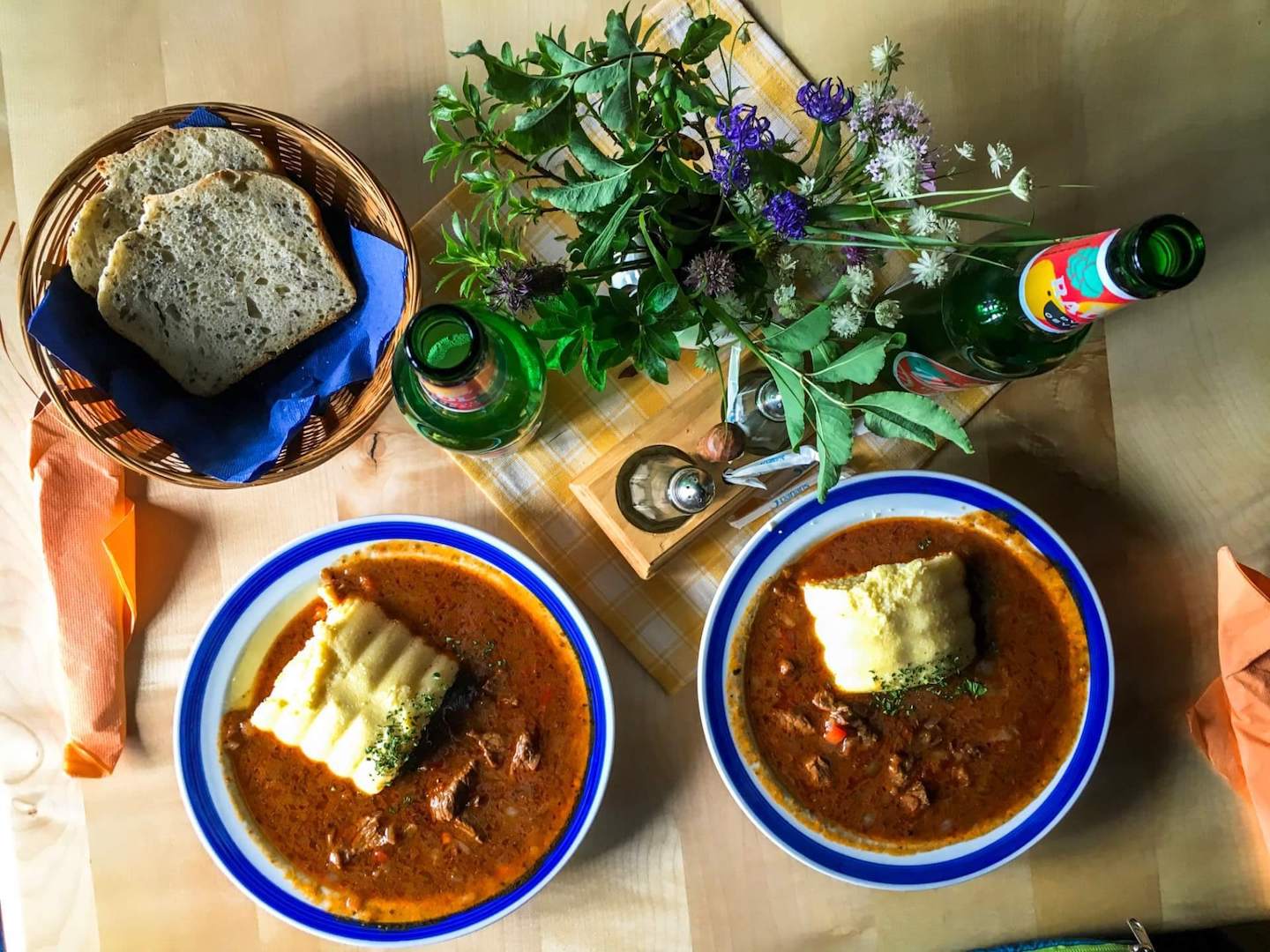 Here are the contact numbers of the mountain huts mentioned in this guide:

Note: budget an additional 15 EUR per day if you don’t have an alpine club membership card.

All trails are marked with the Knafelc Waymark, which is a red circle with a white center. Trail markings are generally well-maintained and easy to follow.

Become a member of an Alpine Club

You can learn more about European Alpine Clubs in our Hiking in the Alps guide. 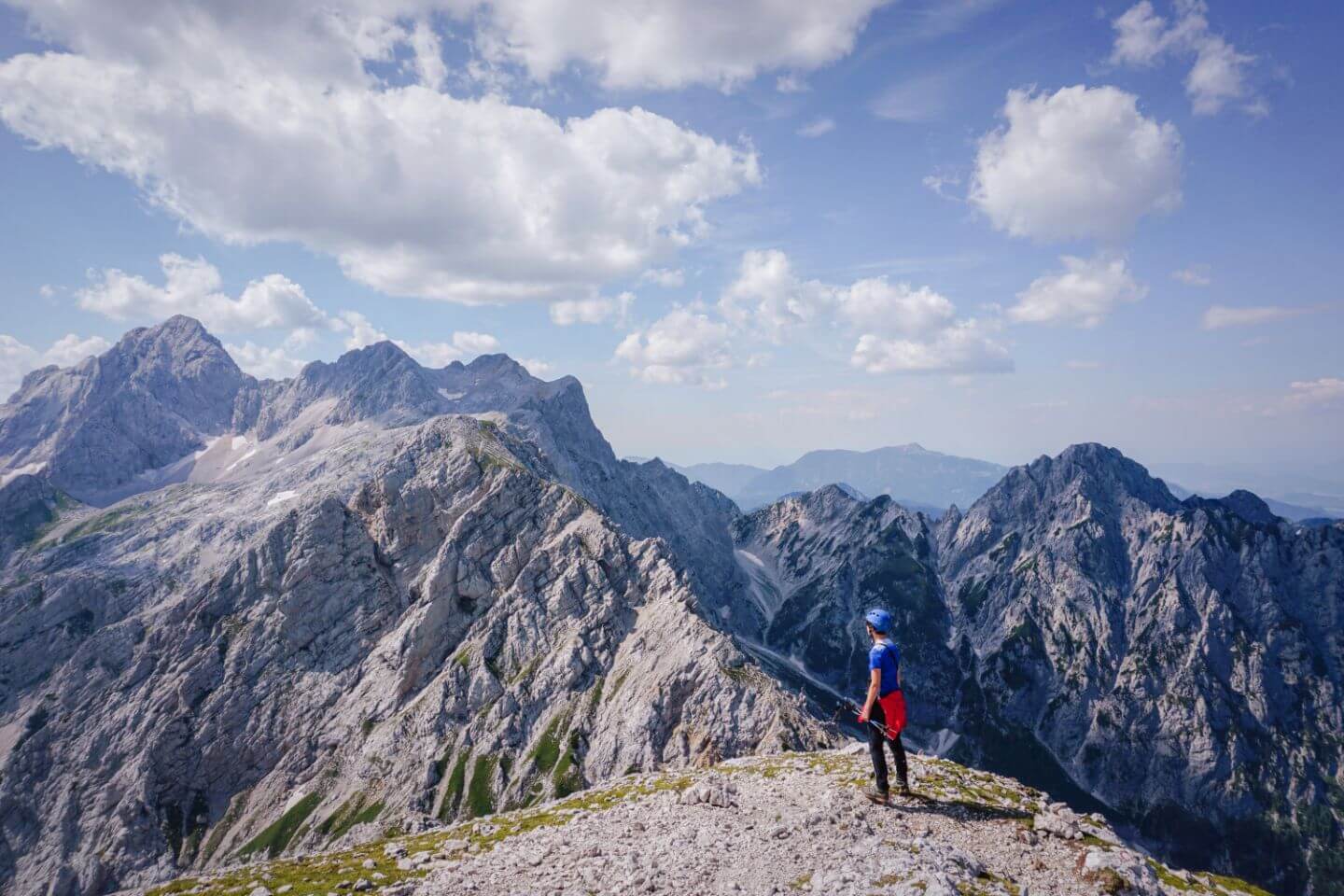 If you’re arriving in Ljubljana, you can catch a direct train (or bus) to Kamnik (1 hour), where you have to change to another bus to Kamniška Bistrica (20 min.).

Another option is to spend the night in Kamnik, before making your way to the trailhead the next day.

Where to Stay in Kamniška Bistrica

Budget | We stayed at Dom v Kamniški Bistrici, a hut located directly at the trailhead. The food was great and the hosts were really friendly and helpful.

Where to Stay in Kamnik

Look for accommodation in Kamnik. 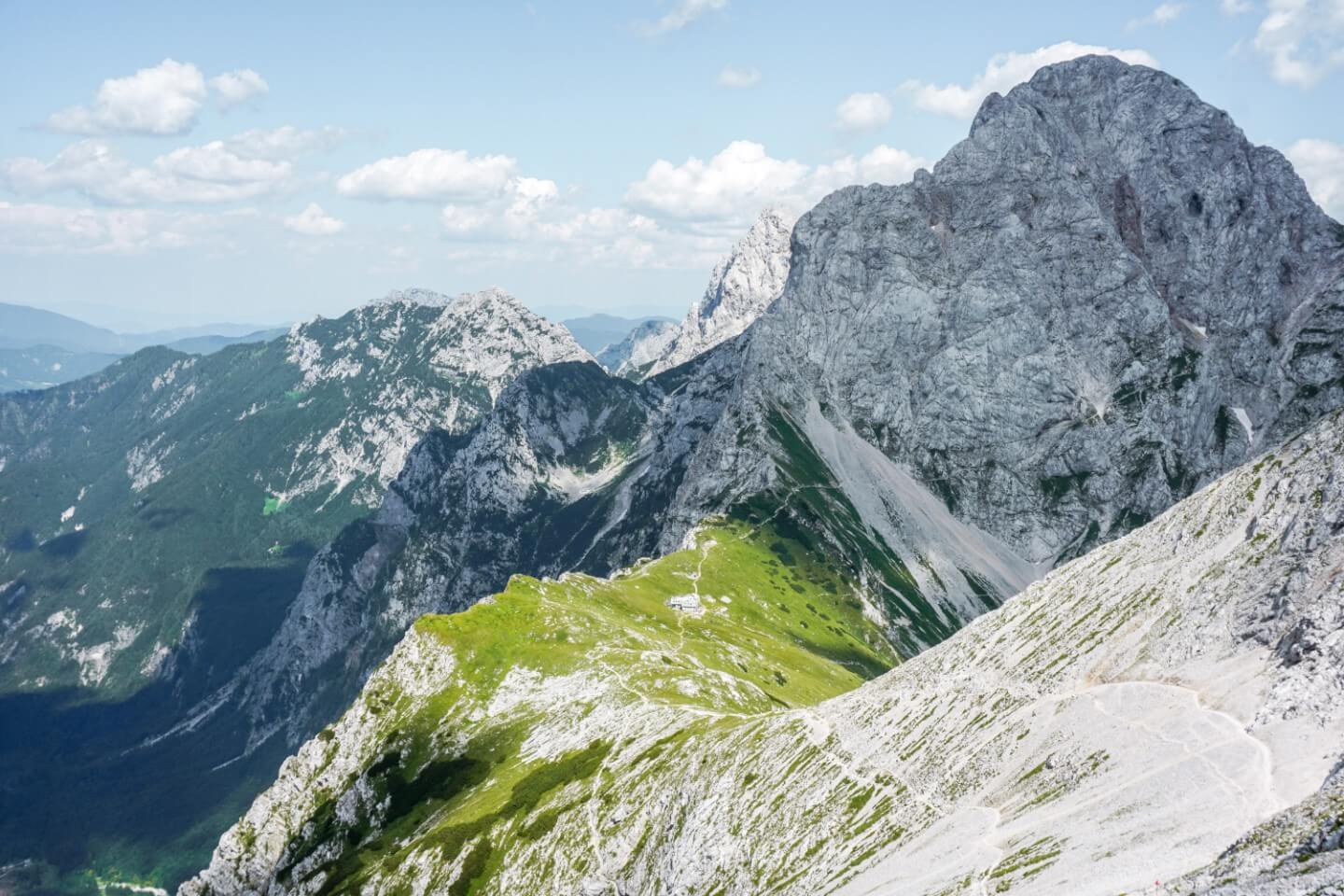 The trail begins at Dom v Kamniški Bistrici. Follow the paved road from the hut to a small parking lot. At the parking area, there will be red signs indicating the direction to Kamniškem sedlu (our trail) and Kokrskem sedlu.

The trail begins steeply and ascends through the forest via a narrow path. Simply follow the Knafelc trail markers, which are white dots surrounded by red circles.

After 2 hours of ascending through the forest, you’ll reach a resting area with an A-frame shelter called Pastirji.

Soon after the shelter, you’ll clear the bush and walk into a glorious meadow covered in wildflowers. From here, you’ll see the beautiful limestone mountains Brana and Planjava.

After the meadow, the trail continues to ascend to the mountain saddle.

The destination of day 1 is a mountain hut situated on a green meadow at the saddle between Mount Brana and Mount Planjava.

After lunch and some rest, we decided to hike to the summit of Mount Brana. It takes about 1:30 hours round-trip.

It’s a rocky climb that requires the use of both hands in many places and some scrambling. There are some assisted ropes to aid with your ascent and descent.

Though you don’t need a full via ferrata (Klettersteig) kit for this, you should wear a helmet like this women’s helmet and this men’s helmet.

Near summit of Mount Brana 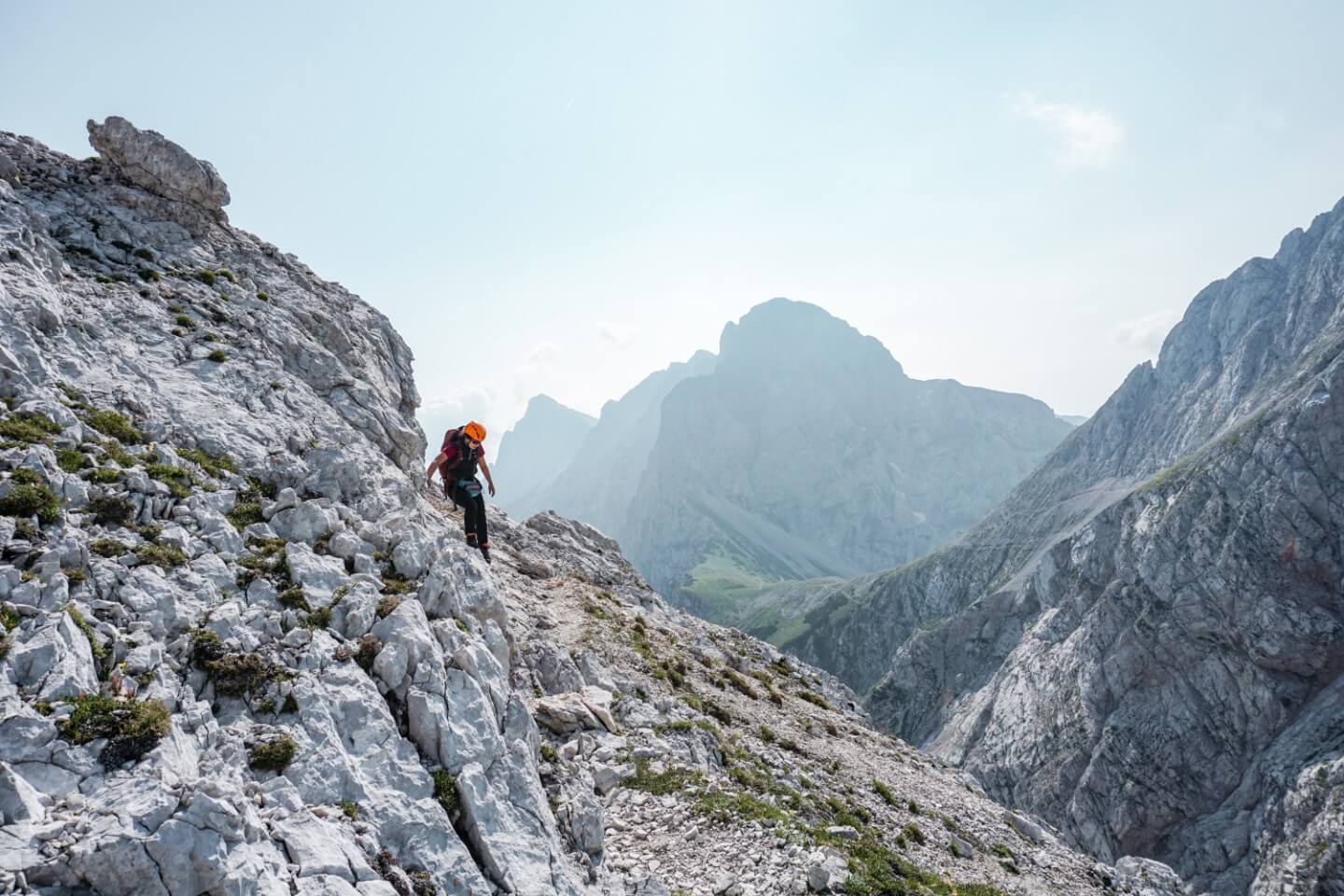 The hike today is challenging and technically difficult. A huge segment of the trail follows an assisted climbing route. While you don’t have to have a ton of via ferrata experience to successfully hike this trail, you should have alpine hiking experience and the right equipment.

The trail takes officially 6:30 hours. It took us 8 hours (with breaks).

From the hut, follow the trail towards Mount Brana. There will be an intersection marked by red signs, indicating left and up to Mount Brana and straight towards Turska Gora (mountain).

The trail to Turska Gora initially plummets abruptly. Your descent is aided by fixed ropes, footholds, and other climbing aids. You’ll need both of your hands for much of this trail.

The first few hours of the trail require concentration as you manage the secured passage to the summit of Turska Gora (2251 m). If it’s raining, don’t attempt this trail – it’s not safe.

From the summit of Turska Gora, the trail descends gently.

To reach the mountain hut Cojzova koča, you can decide between the trail via Sleme (presumably the easier way) or via Skuta (2533 m). We opted for the former.

The trail traverses a high plateau characterized by slabs of limestone, scree, and boulders.

At Mali Podi, the beautifully designed shelter Bivak pod Skuto na Malih podih (2045 m) is reachable via an unmarked footpath to the left (according to Maps.me). We didn’t do a detour, because of the thick fog and our desire to get to our destination before any rainfall. 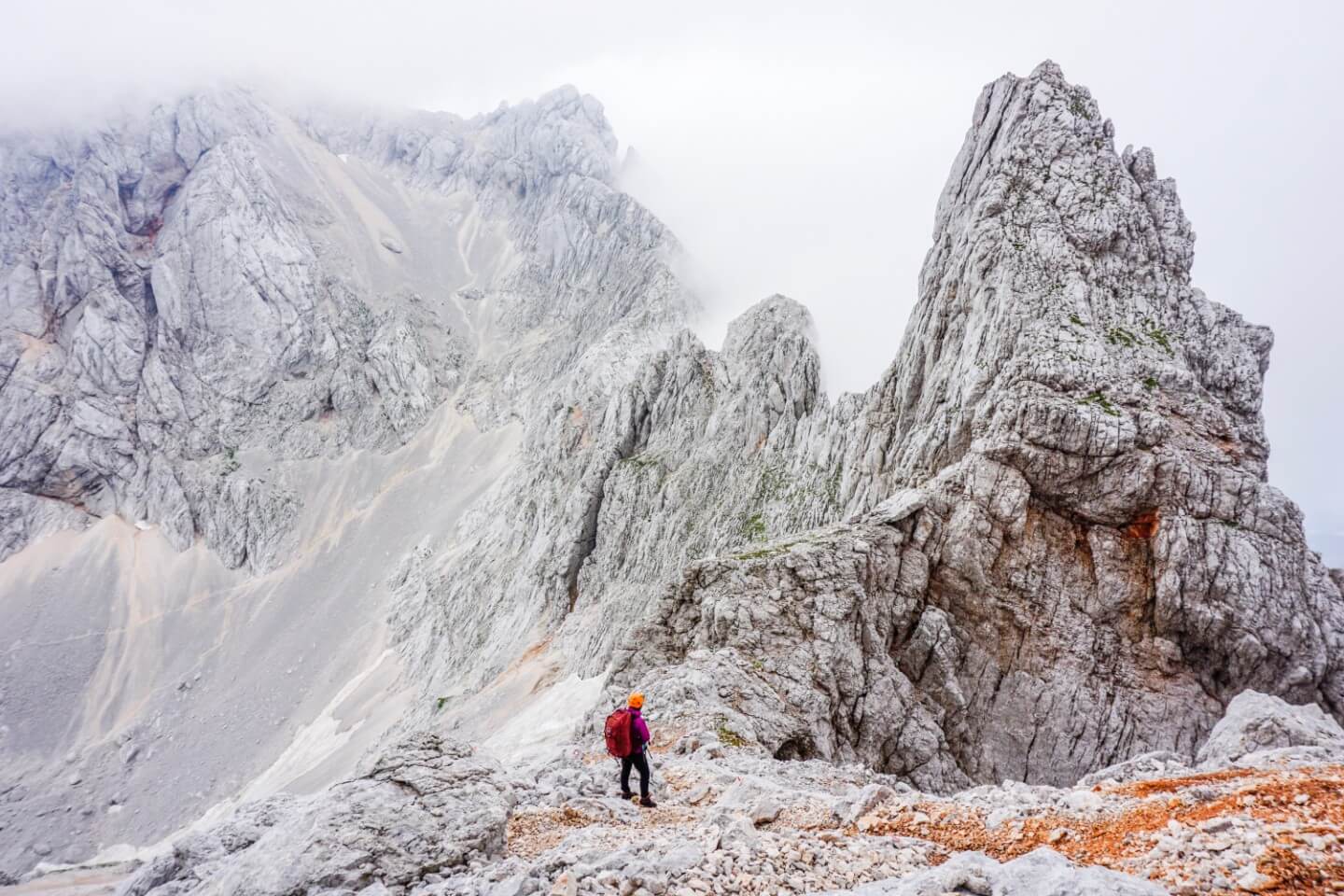 Stage 3 is as challenging as Stage 2. It requires a fair amount of scrambling and use of both hands. Though the route is partially secured, there are challenging parts that require concentration and a strong head for heights. After summiting the highest peak in the Kamnik Alps, you’ll climb a mountain ridge and descend through scree to the charming mountain hut Češka koča. Only hike this route in good weather.

The hike today officially takes 7 hours. It took us 9 hours with breaks.

The hike begins surprisingly gently as you make your way to Mount Grintovec. It takes 2 hours to reach the summit.

Unlike the ascent, the descent is significantly trickier. Soon after you start the descent, you’ll be faced with a short (somewhat) secured segment that was challenging (especially if you’re not a tall European man). The trail is exposed and requires sure-footedness. For more info, read Summitpost’s Grintovec.

After the secured section, the trail will split. You can go left and towards Dolška škrbina (the “easier” route), or right and towards Mlinarsko sedlo (the more difficult route). We opted for the left trail. Dolška škrbina (notch) is basically the saddle between Grintovec and Kočna, or better described as the lowest point of the ridge.

The path down Grintovec is mostly characterized by loose rocks and scree. Though we were hyper-focused on our footing, we were able to admire the devastatingly beautiful peaks around us.

After hiking Spremova pot (trail) and traversing a steep snowfield (hiking poles were essential), we followed the trail markings in the direction of Kočna. The trail leads you vertically up a ridge, which you’ll follow for some time.

Next, the trail turns into another assisted climbing route (via ferrata), called the Kremžar route, Kremzarjeva pot. This secured path was unforgettable. The mountains envelop you and you’ll have magical views of the Ravenska Kočna valley. For more info, read Summitpost’s Kremžar route.

The trail continues and ultimately intersects with the trail from Mlinarsko sedlo at 1800 m.

Below the summit of Grintovec 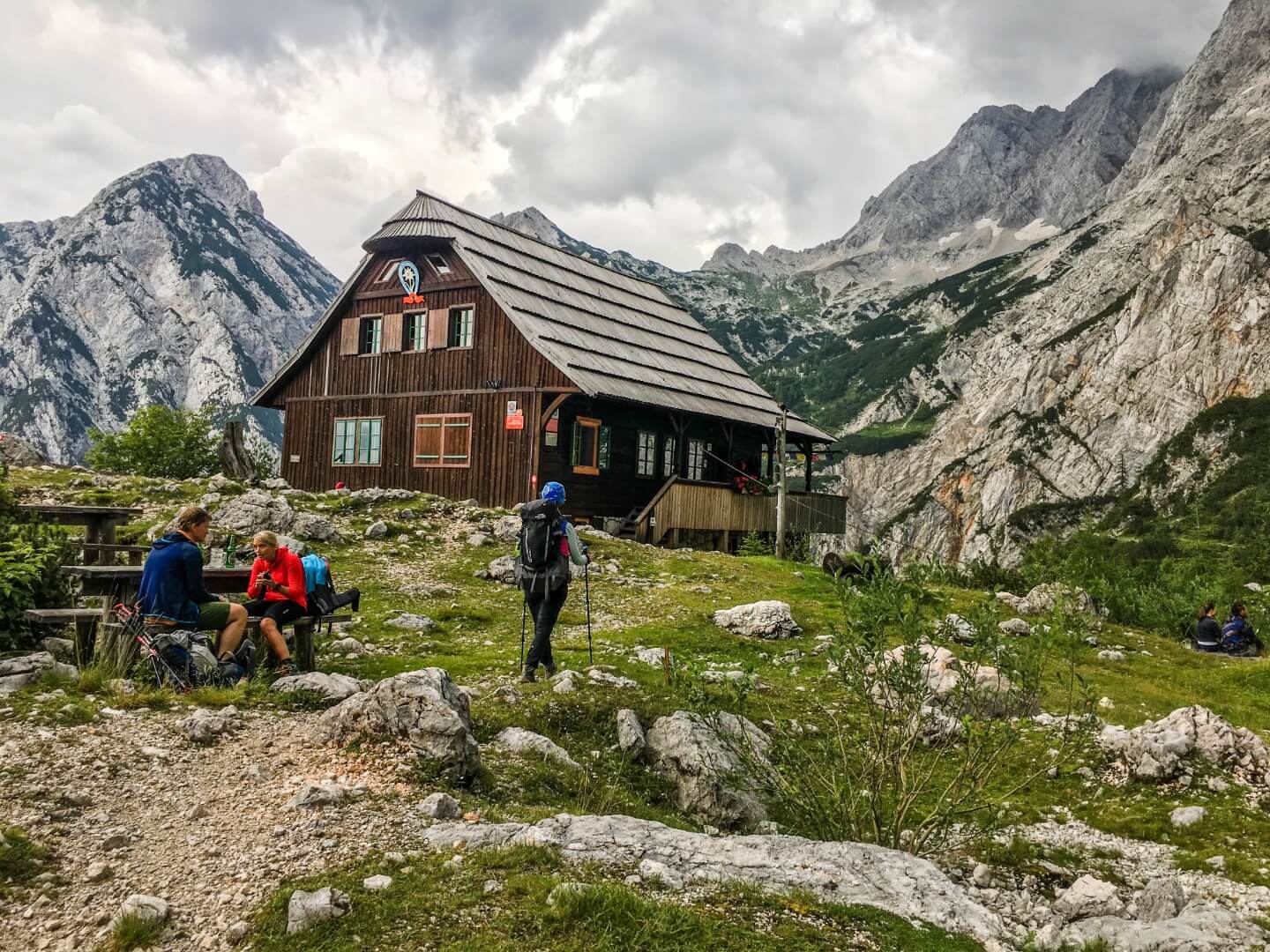 Day 4 rewards you with an easy finish. We slept in as long as possible and enjoyed a slow breakfast. There’s absolutely no hurry today, as the hike to the village Zgornje Jezersko takes only 2 hours.

Follow the Slovenian Mountain Trail #1 in the direction of Jezersko.

The forest trail (#1) was a welcome relief for our tired feet.

The trail intersects the road and it’s a short walk into the village. From the road, you’ll have jaw-dropping views of the Kamnik Alps.

Budget | We stayed the night at Glamping and B&B Cvet Gora, which was delightful. They have fun “glamping” A-frame huts to sleep in. Showers are communal but very clean. Breakfast is only 5 EUR. The guesthouse is located right on the road, so it’s easy to find.

Mid-Range | Tourist farm Šenkova domačija is a top-rated farm stay in Jezersko celebrated for its hospitality and fabulous location.

From your accommodation in Zgornje Jezersko, it’s a 10-25 minute walk to the beautiful lake Planšarsko jezero. At the lake, you’ll find the restaurant, Gostišče ob Planšarskem Jezeru. We had a delightful dinner here. 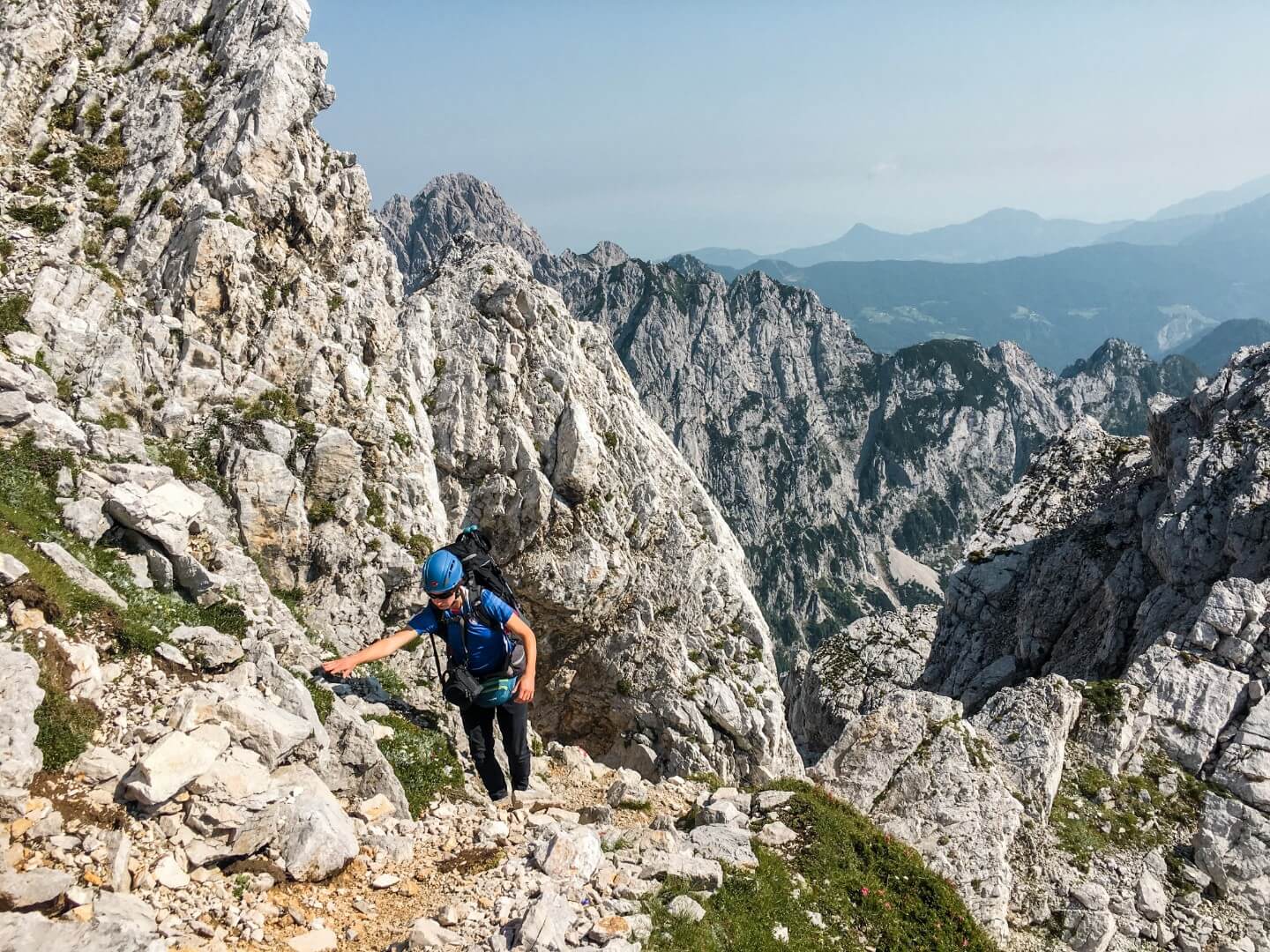 Plan your trip to Slovenia:

Do you love hiking in the Alps? Read these guides next: 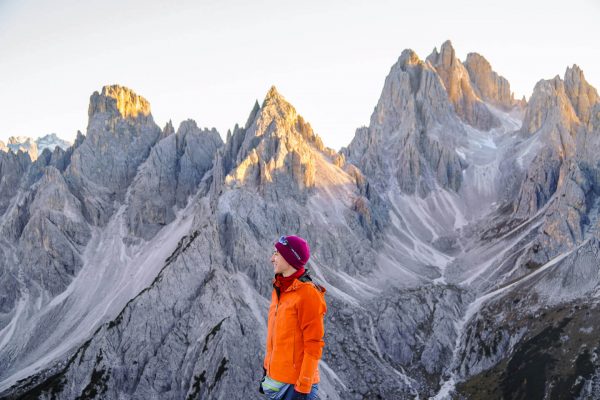 20 Best Places to Visit in the Dolomites in 2022: Must-see Destinations & Attractions 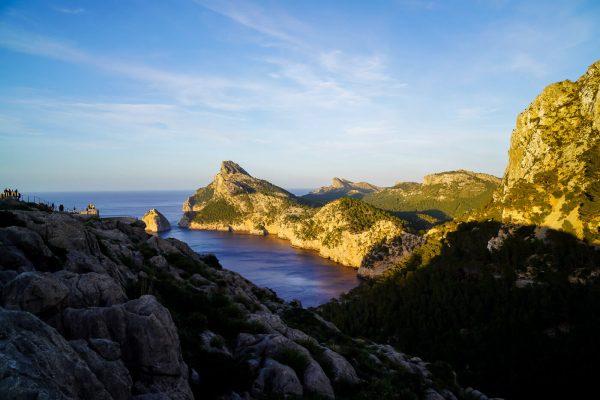 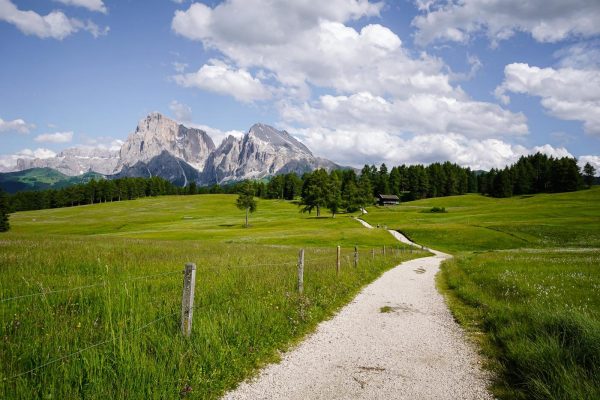 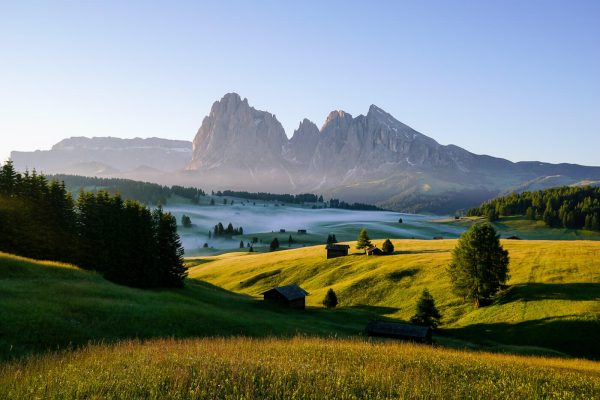 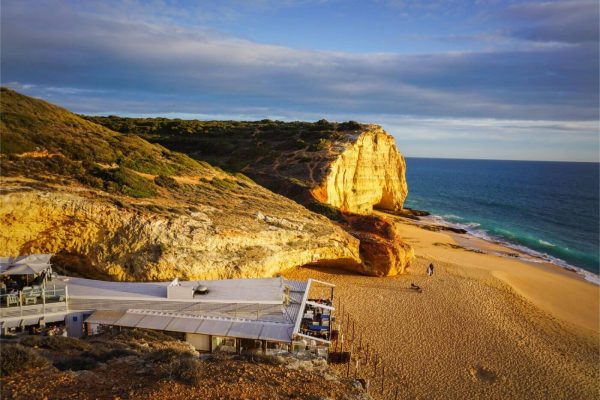 6 Things to Do in Algarve in November, Portugal 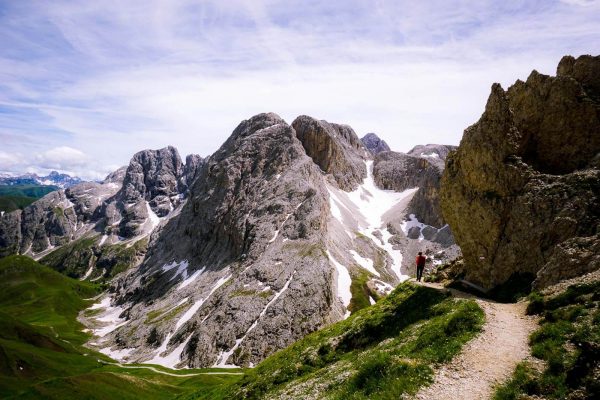