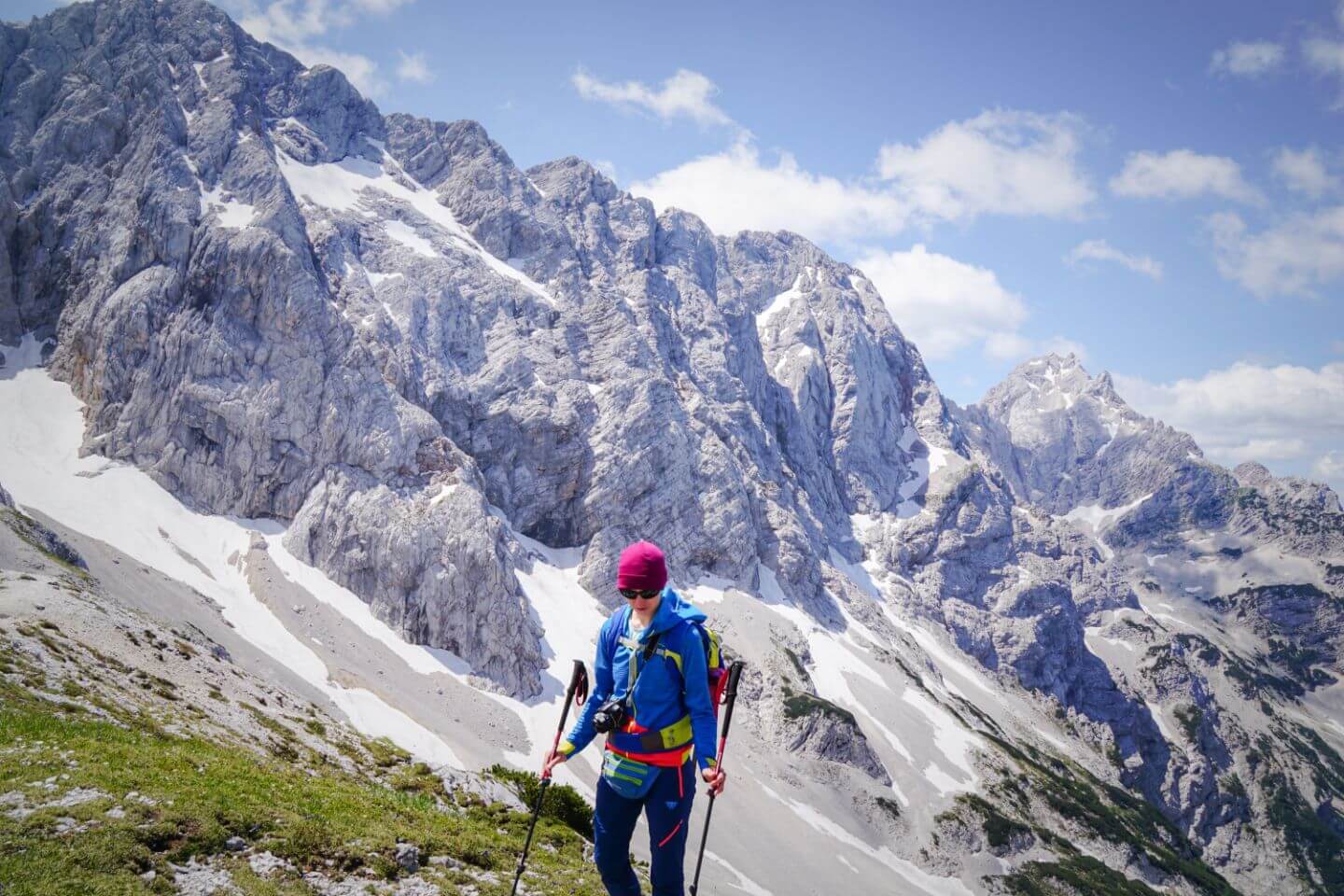 Ledinski Vrh (2108 m) is an approachable peak in the Kamnik-Savinja Alps, located on the border between Austria and Slovenia. On the Slovenian side, you can hike to Ledinski Vrh from both Jezersko and Logar Valley.

The route from Logar Valley is particularly gorgeous, as you ascend from Slap Rinka waterfall up to the Okrešelj glacial cirque, and over the Savinjsko Sedlo (saddle). This is an excellent full-day excursion if you’re based in Logar Valley for a few days.

While Slovenians would describe this trail as “easy,” we’d label this hike as “moderately difficult,” because of the scree terrain and some steep passages. In the summer months, it’s best to start early in the morning, because most of the trail is exposed and it gets very hot.

How to Get to the Ledinski Vrh Trailhead

To reach the trailhead, drive to Logar Valley in the Solčavsko region of Northern Slovenia. To enter the valley, you first have to pay a fee.

Continue driving to the very end of the valley. There’s a parking area at the end of the road. The trail starts here.

Related: Best Things to Do in Logar Valley

Follow signs to Slap Rinka. It takes 10-minutes to reach the waterfall along a wide gravel path. Facing the Rinka waterfall, there’s a treehouse-hut structure called Orlovo gnezdo, where you can grab a drink or bite to eat.

Just before the waterfall, the trail steers left over a plank wooden bridge. Follow signs to Dom na Okrešlju (also called Frischaufov dom na Okrešlju). Note: this mountain hut on the Okrešlju cirque burned down in 2019. The hut is now a construction zone (summer 2020).

The trail ascends along the Savinja river, sometimes very steeply. Your ascent is aided by steel cables and wooden ladders. You’ll cross the river on another wooden bridge and then continue ascending on the right side of the river to Izvir Savinje, the source of the Savinja River. Here, you’ll cross the water again, and ascend through the forest to Okrešlju.

The ascent is initially quite gentle, following a rocky path (low grade) in the direction of the Rinka peaks. Spruce gives way to creeping pine. If you look back, you’ll see the magnificent Ojstrica and the Kamnik Saddle between Planjava and Brana. You’ll cross a torrent (looks like a dried-up river bed) and continue ascending along a gravel path.

As you progress, you’ll come to a few marked intersections (signed on boulders). Always head in the direction of Kranjska koča na Ledinah and Savinjsko Sedlo.

The trail crosses scree slopes and steeply ascends through some tight passages to the Savinjsko Sedlo, which is also the Austrian-Slovenian border.

The descent follows the same route you ascended.

Where to Eat after the Hike to Ledinski Vrh

After the hike, we ended our day at Planšarija Logarski kot with some Union Radler, Gobova Juha, Sirova plošča and Jabolčni zavitek. Everything was delicious. We couldn’t locate an English menu, so we translated it below for you. Not all items are always available, but this is the general offering:

Where to Stay in Logar Valley

We highly recommend staying in Lenar Farm, a historic farmstead in Logar Valley. Here, you’ll start your day with a delicious breakfast and equally delicious views. This family-run farm stay feels like your home away from home. People return here year after year to relax and soak up the peace of Logarska Dolina for a few days.

Book your stay at Lenar Farm.

Look for accommodation in Logar Valley.

Related: Where to Stay in Slovenia in Summer

More Hikes in the Kamnik-Savinja Alps:

Plan your trip to Slovenia