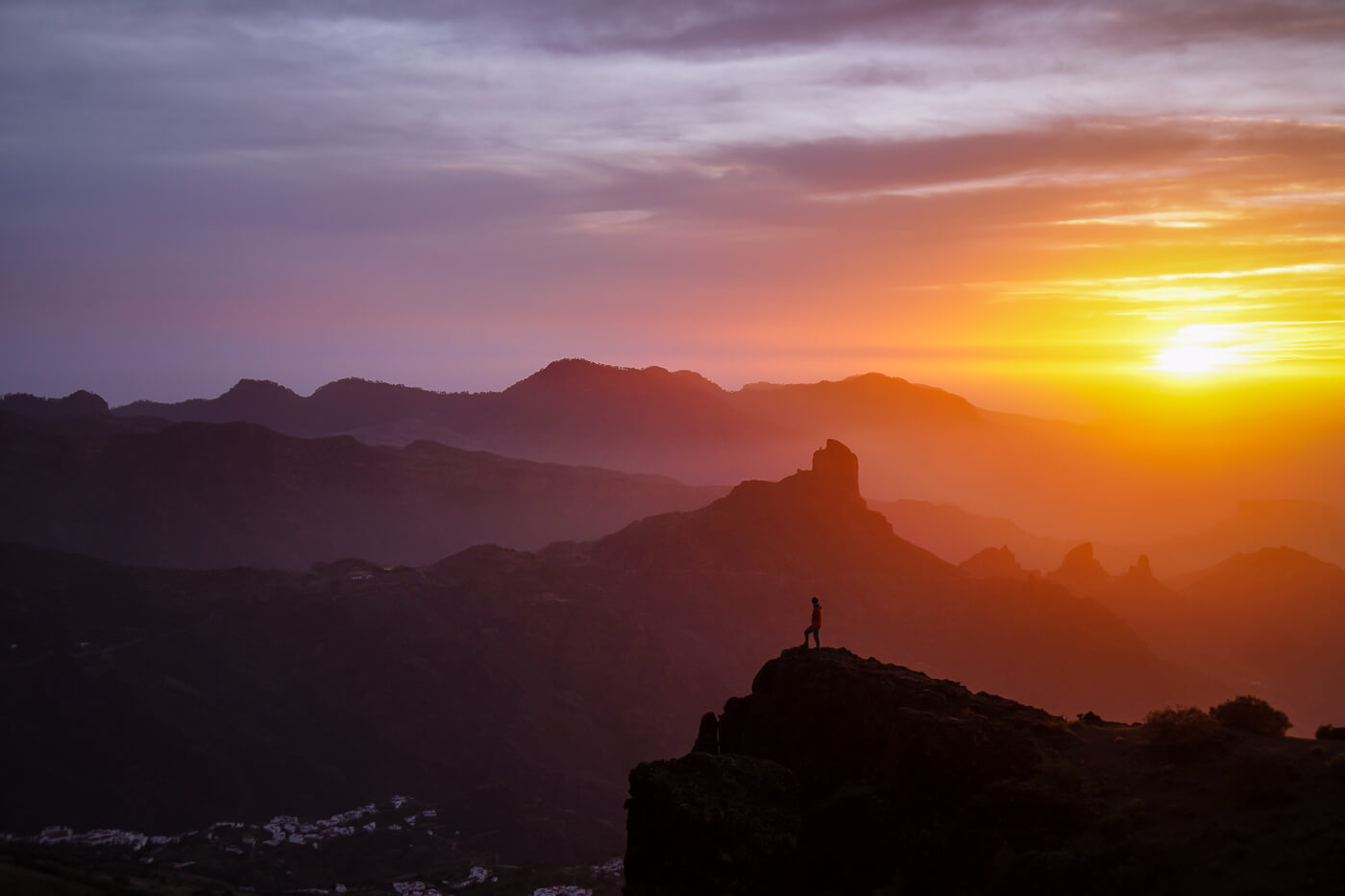 The hike from Cruz de Tejeda to Cuevas del Caballero is an outstanding half-day outing with sweeping views of the cliffs and ravines of the collapsed volcanic crater of Tejeda.

If you only have time for one short hike in Gran Canaria, choose this one.

Cruz de Tejeda, the geographical center of Gran Canaria, is located at the crossroads of the GC-15 and GC-150, high above Tejeda village. At Cruz de Tejeda, there’s a bar, restaurant, tourist office, the Parador hotel, and two large parking lots.

This route follows a high trail to the Mirador Degollada de las Palomas viewpoint and then onwards to the fertility caves of Cuevas del Caballero.

This hike traces one of Gran Canaria’s restored royal pathways (Los caminos reales de Gran Canaria). Royal paths are ancient pathways, which were used by the indigenous inhabitants to move and transport goods across the island. These paths connected the island’s various centers, before roads existed.

How to Get to Cruz de Tejeda

Cruz de Tejeda is located at the intersection of the GC-15 and GC-150 roads, high above Tejeda village, in the interior of Gran Canaria.

There are two large parking lots in Cruz de Tejeda along the GC-150 road. Parking is free.

Cruz de Tejeda is accessible by bus. Use the Global Bus website or Google Maps to plan your journey.

If you’re visiting from Las Palmas, Maspalomas, or other coastal destinations, a bus journey to Cruz de Tejeda will involve several transfers.

The Cuevas del Caballero trail starts at the parking lot next to the Parador de Cruz de Tejeda Hotel. At the back of the parking lot, there’s a large hiking board and trail signs. Head left, in the direction of Artenara (S-90).

The path ascends quickly above the Parador Hotel. A yellow-painted arrow guides you left around a fenced-off concrete water tank.

From the onset, the views of Roque Nublo, Roque Bentayga, and the Tejeda Basin are impressive.

The trail continues to ascend, more steeply now, towards a line of pine trees.

After a few minutes, the steep uphill track levels out and cruises along an utterly spellbinding balcony trail. The path steers you in the direction of the Moriscos mountain, which you’ll circuit later on.

The trail dips down to the road at Mirador Degollada de las Palomas (1622 m). The viewpoint is marked by a yellow, covered lookout point, overlooking the village of Tejeda set in the depression of the crater.

Continue following S-90 in the direction of Artenara towards the forest.

After about 280 meters, the path divides. Take the left, upper footpath.

We missed the left trail and continued on the obvious, wide forest trail. After about 420 meters (7 minutes), there’s a track which cuts through the forest to the upper track, which runs parallel to the cliff edge.

Follow this scenic footpath, with the edge of the cliff on your left, and the forest on you right.

The upper track skirts Montaña de Los Moriscos, passing in and out of pockets of forest.

This trail affords bird’s-eye views of the GC-210 road twisting around white-washed hamlets and terraced fields.

Continue following this easy, undulating trail until you reach the crags of Risco Chapin. The views of the deeply etched Tejeda ravine and the folded ridges and layers of the mountains impress throughout.

A rock outcrop indicates the location of the cave. Don’t miss the rock window which frames Roque Nublo.

The cave openings face the basin. Pick your way down to the caves and enjoy the panoramic view.

Cuevas del Caballero are a group of seven caves, six of which are man-made. It’s believed that these cave dwellings were used by the indigenous inhabitants for fertility rites.

Throughout the cave system there are etchings of the female vulva as well as channels and basins on the floor, used for summoning rain, a symbol for fertility.

The ceremonial caves are gated off, though you can peer into them.

Follow the wide forest track in the direction of Cruz de Tejeda.

This path completes the circuit around Montaña de Los Moriscos. Stick to the main path.

At the Los Moriscos trail junction, turn right in the direction of Cruz de Tejeda.

Continue hiking through this beautiful Canary pine forest. Soon, you’ll retrace your steps back to the Mirador Degollada de las Palomas viewpoint and then to Cruz de Tejeda.

Cruz de Tejeda (1514 m) is a small hamlet situated on the crossroads of GC-150 and GC-15, high above the town center of Tejeda. Cruz de Tejeda serves as a viewpoint, pit stop, and trailhead.

Luxury | Parador de Cruz de Tejeda is an iconic mountainside hotel overlooking the Tejeda basin. Stay here for the sweeping views of the Tejeda basin and the comfortable rooms with balconies. The cherry on top is the on-site spa and the infinity pool spilling out towards the caldera. If you stay here, make a reservation for the spa in advance.

Situated on the eastern edge of the caldera de Tejeda (volcanic crater of Tejeda), the white-washed town of Tejeda (1050 m) is arguably the most beautiful town on the island. The town center is home to a famous bakery, Dulcería Nublo, an artisan gelateria, Heladería LaLexe, the upscale canary restaurant and brewery Texeda, as well as a number of other eateries.

Midrange | Hotel Rural Fonda De La Tea is a welcoming bed and breakfast in the town center of Tejeda. Guests love the mountain views, the friendly service, overall cleanlieness, and the private terrace.

Budget-Midrange | Vivienda Vacacional La Portada is a top-rated, spotless apartment in the heart of Tejeda with a well-equipped kitchen and terrace facing Roque Nublo and Roque Bentayga.

Look for accommodation in Tejeda.