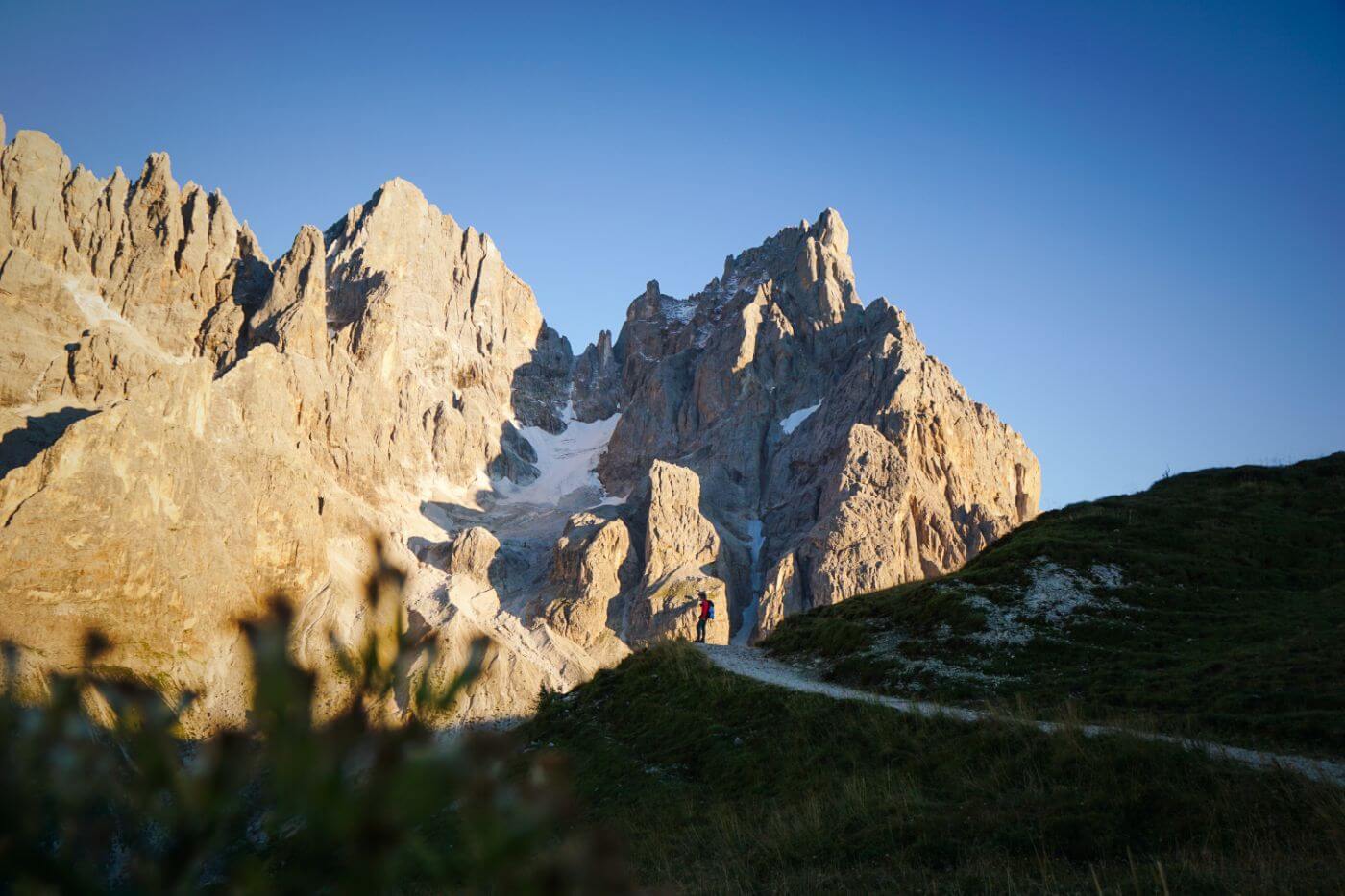 A Complete Guide to Hiking to Baita Segantini and Monte Castellaz in the Dolomites, Italy

By Sabrina Brett
Nov 24, 2020 Leave a comment
in Dolomites,Europe,Italy

Baita Segantini is an alpine pasture hut directly facing the Pale di San Martino (Pala Group) massif in the Italian Dolomites. This scenic destination in Parco Naturale Paneveggio – Pale di San Martino will take your breath away. However, your experience will be greatly impacted by the time of day that you visit.

Relatively easy to access, Baita Segantini is extremely popular among families. Come mid-day, and the trail will be crawling with people. Therefore, we suggest a late-afternoon hike, in which you end your day at Baita Segantini with an unforgettable sunset.

When Can You Hike to Baita Segantini and Monte Castellaz

Early June until mid-October, weather depending.

Baita Segantini is open daily in the summer from 8:30 am until 6:00 pm. Their summer season kicks off during the second week of June and continues until the end of September. At the Segantini hut, you can eat regional specialties such as dumplings, goulash, polenta, mushrooms, yogurt, and Apfelstrudel.

You can hike to Baita Segantini from Val Venegia or from Passo Rolle. For this particular hike, we recommend starting at Passo Rolle.

Passo Rolle (1989 m) is a high mountain pass connecting the Fiemme and Primiero Valleys in Trentino. The pass is a 15-minute drive from San Martino di Castrozza, the popular resort town in Primiero Valley.

Directly at the pass, there’s a large free parking lot. In Google Maps, this parking lot is called Parcheggio Malga Juribello, though we didn’t see a sign indicating that name when we arrived. Park here. GPS: 46.297579, 11.7893.

From the Passo Rolle parking lot, cross the street with caution. Follow the gravel road up to a signed trail intersection. Bear right in the direction of Capanna Cervino and Baita Segantini. It takes about 15 minutes to walk to Rifugio Capanna Cervino.

From the Capanna Cervino mountain hut, proceed along the road in the direction of Baita Segantini for another 10-15 minutes. When you reach a signed trail intersection, turn left towards Castellazzo, leaving the road. It’s so tempting to head straight, but we promise it’ll be worth it. After turning left, you’ll hike beneath a chairlift and follow a grassy and then loamy track towards the solitary Monte Castellaz mountain.

After about 420 meters, turn left at the signed intersection, and horizontally hike across the southwestern slope of Mount Castellaz. The rocky footpath is more or less level at first but becomes increasingly steep as you gain elevation.

When you plateau, you’ll be greeted by the white Cristo Pensante (“Pensive Christ”) sculpture, which seems to guard the summit.

Explore the various viewpoints along the Castellaz ridge. From this elevation, the northern chain of the Pala Group looks like it’s jutting out of a sea of rolling green waves. The view is to die for.  With its pale-colored 3000+ meter peaks, each uniquely beautiful, the Pala Group also looks like a gathering of giants turned to stone. From right to left, you’ll see Cimon della Pala, Cima della Vezzana, Campanile Travignolo, Cima Silvano, Cima dei Bureloni, and Monte Mulaz.

There’s a plaque in Italian indicating that Monte Castellazzo was fortified by the Italian Alpini in the First World War to safeguard Passo Rolle and other nearby artillery positions.

From the summit, start the descent along the north flank of Monte Castellaz.

Shortly thereafter, the trail divides. When we hiked this trail, the right path was roped off for safety reasons. So, keep “left” and continue descending.

The trail eventually levels and you’ll hike across grassy pastures along a loamy track. As you hike towards the Pala peaks, the trail ascends gently and then makes a wide-berth around Costazza, which looks like a grassy hill.

The trail joins a flat, gravel track. Continue wrapping clockwise around Costazza. Soon, you’ll arrive at Baita Segantini. As you progress, you’ll see a serpentine road snaking its way up the Val Venegia valley. The photography options are endless.

Just beyond the Baita Segantini mountain hut, there’s a small lake. In the early afternoon, this lake looks like a murky pig’s bath.  At golden hour and sunset, this brown lake transforms into an enchanting reflection pool.

You’ll see a line of photographers with tripods here, all eager to capture the magic of Pale di San Martino at sunset. From this perspective, the oval-shaped Mount Mulaz forms the backdrop of Baita Segantini.

Just before sunset, the Pale mountains light up in saturated hues of yellow and orange, burning like flames. A few minutes later, the peaks turn rose and violet. And then, far too quickly, the light goes out, and it looks like someone blew out the candles. Sunset at Baita Segantini is an unforgettable experience.

The best places to watch the sunset are directly at the lake, facing Baita Segantini, or at the top of Costazza.

After sunset, follow the gravel road to Rifugio Capanna Cervino and then down to the parking lot. There’s also a more direct footpath that cuts across the slopes, which you can take as well.

You may want to bring headlamps for the descent.

Where to Stay in San Martino di Castrozza

The best place to stay for this hike is San Martino di Castrozza. This resort town is a mere 15-minute drive from Passo Rolle.  If you stay in San Martino di Castrozza, you’re well-positioned to ascend to the central plateau of the Pala Group and tackle the Pala di San Martino Circuit Hike (Rifugio Rosetta to Rifugio Pradidali) and the summit of Cima della Vezzana. Additionally, the spellbinding Val Venegia valley, the starting point for the Rifugio Mulaz Circuit, is only a 30-minute drive away.

Budget | Residence Taufer is an affordable apartment-style accommodation, located 1 km from the center of San Martino di Castrozza. Apartments are clean and fully equipped, with all necessary appliances to make your stay here comfortable. The check-in/check-out is easy and uncomplicated. There’s a welcoming bar downstairs, where you can order espresso, drinks, and snacks throughout the day. And, the views of the Pala Group are sublime!

Midrange | Hotel Vienna is a welcoming family-run hotel, set in the heart of San Martino di Castrozza. This 3-star hotel delivers gorgeous mountain views, cozy and spacious rooms, and a great breakfast. The staff is very friendly and helpful.

Luxury | Sayonara Nature & Wellness Hotel is a top-rated luxury hotel in San Martino di Castrozza. Stay here for the spacious, alpine-modern rooms, the rich and varied breakfast buffet, and the 1000 m2 spa and wellness area. The hotel is a 5-minute walk to the center of town. The hotel’s on-site restaurant is open daily for dinner.

Plan your trip to the Dolomites:

Where to Stay in the Dolomites:

When to Visit the Dolomites:

Our Favorite Destinations in the Dolomites: