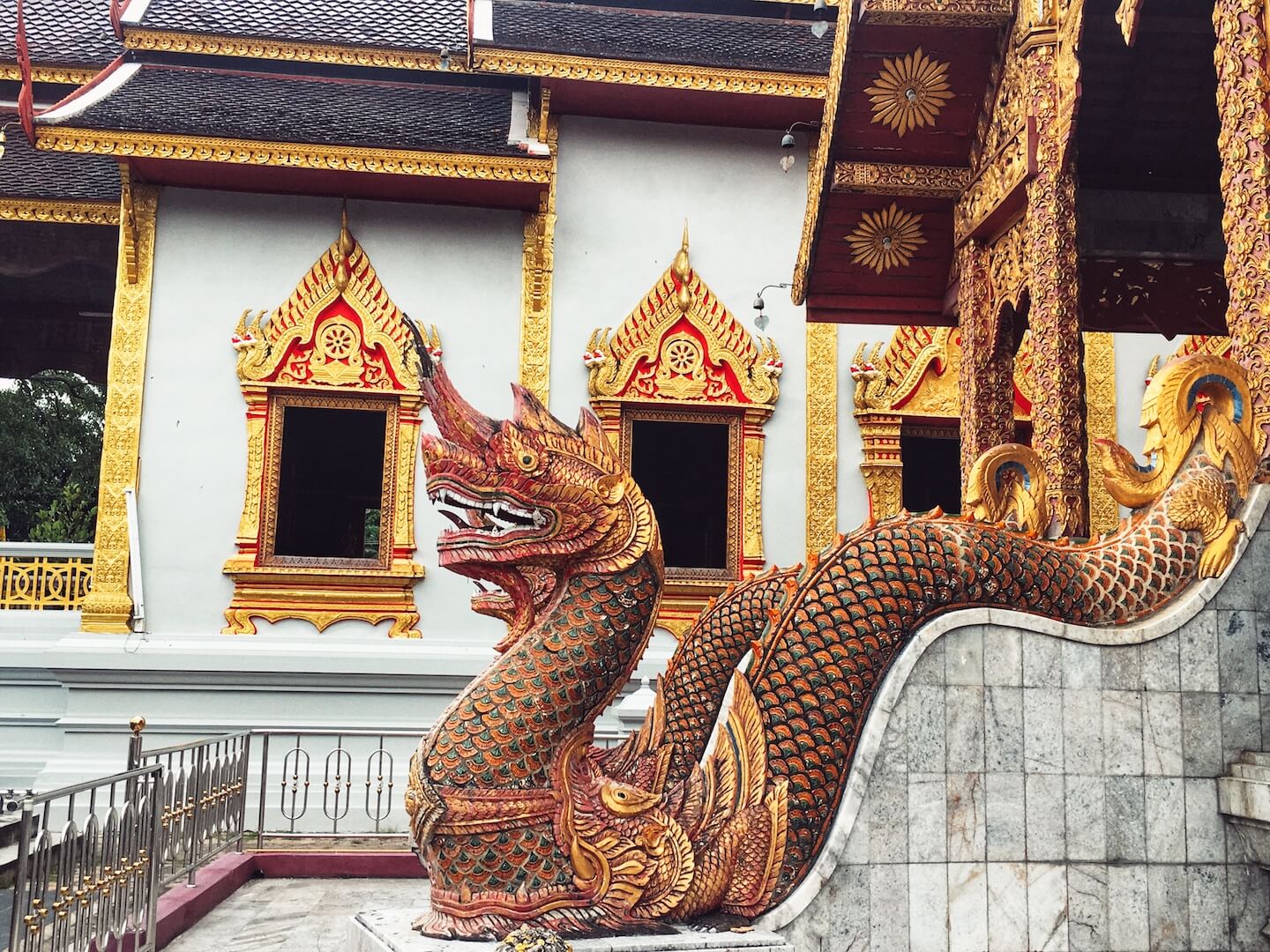 We traveled to Thailand in October and November 2017 for the very first time. It opened our eyes to new ways of experiencing food, roads, historical sites, and animals. We absolutely loved it! We’ve compiled several of our impressions as they pertain to (1) the monarchy and imagery, (2) spirit houses, and (3) women and Buddhism.

We arrived in Bangkok during the official mourning period of the late King Bhumibol Adulyadej. Everyone was dressed in black and the city streets were draped in white and black fabric. Images of the king were everywhere – in both public and private spheres.

The King’s portrait was displayed on billboards, inside transit systems and shop-house restaurants, outside mega-malls and airports. After the mourning period, we continued to see images of the King – both the late and the new monarch – everywhere we traveled. The king’s portrait is often framed and adorned with flowers similar to that of a religious shrine.

Interestingly, these king “shrines” occupy space on temple grounds. The presentation and imagery communicate a strong connection between the divine and the monarchy. Coming from a western society, where there is (or at least should be) a clear delineation between the sacred (church) and the secular (state), this is a foreign site to see. Imagine if a presidential portrait was inside every church building in a western country. In Thailand the secular and the sacred blur together in a fascinating way. It’s as if everything is imbued with the sacred. There is no secular or profane.

One of the first things that struck us in Thailand were the colorful spirit houses erected on private properties, business premises, and on temple grounds. We’ve since learned that though they vary in size, color and decorative elements, they serve the same purpose: keeping the resident spirits happy.

A local explained to us that if you provide a house for the good spirits, they will protect your property and bring luck to your business. However, it’s crucial to provide them with daily offerings, in the form of food and beverage, to keep them happy.

Many spirit houses are adorned with animal figurines, statues of dancing ladies, flower garlands, and incense. The practice of maintaining spirit houses stems from animistic beliefs inherited from ancestors, rather than Buddhism. The fact that different belief systems can harmoniously coexist and not threaten the other in some way is respectable and very (for lack of a better word) cool!

During our time in Thailand, we saw Buddhist monks of all ages everywhere.

We learned that women should never touch, or pass something directly to a monk. Such contact may “distract” a monk from their spiritual path. This idea of women “distracting” or “corrupting” a monk’s path to enlightenment is manifest in physical spaces as well. We stumbled upon a few temples in which women were prohibited from entry. Outside the Inthakhin Pillar Vihara in Chiang Mai there’s a sign that explains why women can’t enter:

“Chiang Mai’s city pillar is located in Wat Chedi Luang and is now enshrined underground. It is a sacred place and worshiped by Thai people, especially those from Chiang Mai. It is the pillar of the city. Women are prohibited to enter because they menstruate. It is believed that it humiliates and ruins the sanctity of the city pillar. Besides, men who dress inappropriately are not allowed to walk in. It is believed that any disobeying of the rules will cause social instability.“

The Silver Temple (Wat Srisuphan) in Chiang Mai also doesn’t allow women to enter. However, there’s no explanation why.

The perception of menstrual blood as a polluting force isn’t just a Thai concept. Menstrual taboos are shared by many cultures. In most western societies, it’s improper to even discuss menstruation in mixed company.

From the advertising of menstruation products – labeled as feminine “hygiene” – in the U.S. to the temples of Thailand, menstrual taboos are so prevalent that we sometimes don’t even recognize them.

But their prevalence should never be their defense. It’s important to question these ideas everywhere, whenever we encounter them. Why is a woman not allowed in Chiang Mai’s most sacred spaces? Why is female blood believed to be humiliating? One could easily say there is nothing more sacred than the female body – the giver of life. And yet, women are denied entry.

Another question we have is: why aren’t there any female monks? Why isn’t there a structured path of enlightenment for women? When we joined a monk’s chat, a monk explained that the line of female monks died out.

We’re still seeking more clarification. From our outsider perspective, it seems that women can’t participate equally in Buddhism (like all major religions). And that’s problematic.

By becoming a monk, a man can elevate the prestige of his family. Women can’t contribute to their family honor in the same way, and so, culturally, they have “less” value than men. Also, some men become monks to help their mother’s souls ascend to heaven. Again, women can’t do this. Is it then preferred to have male offspring in a culture that enables men to contribute more to the social and spiritual well-being of the family?