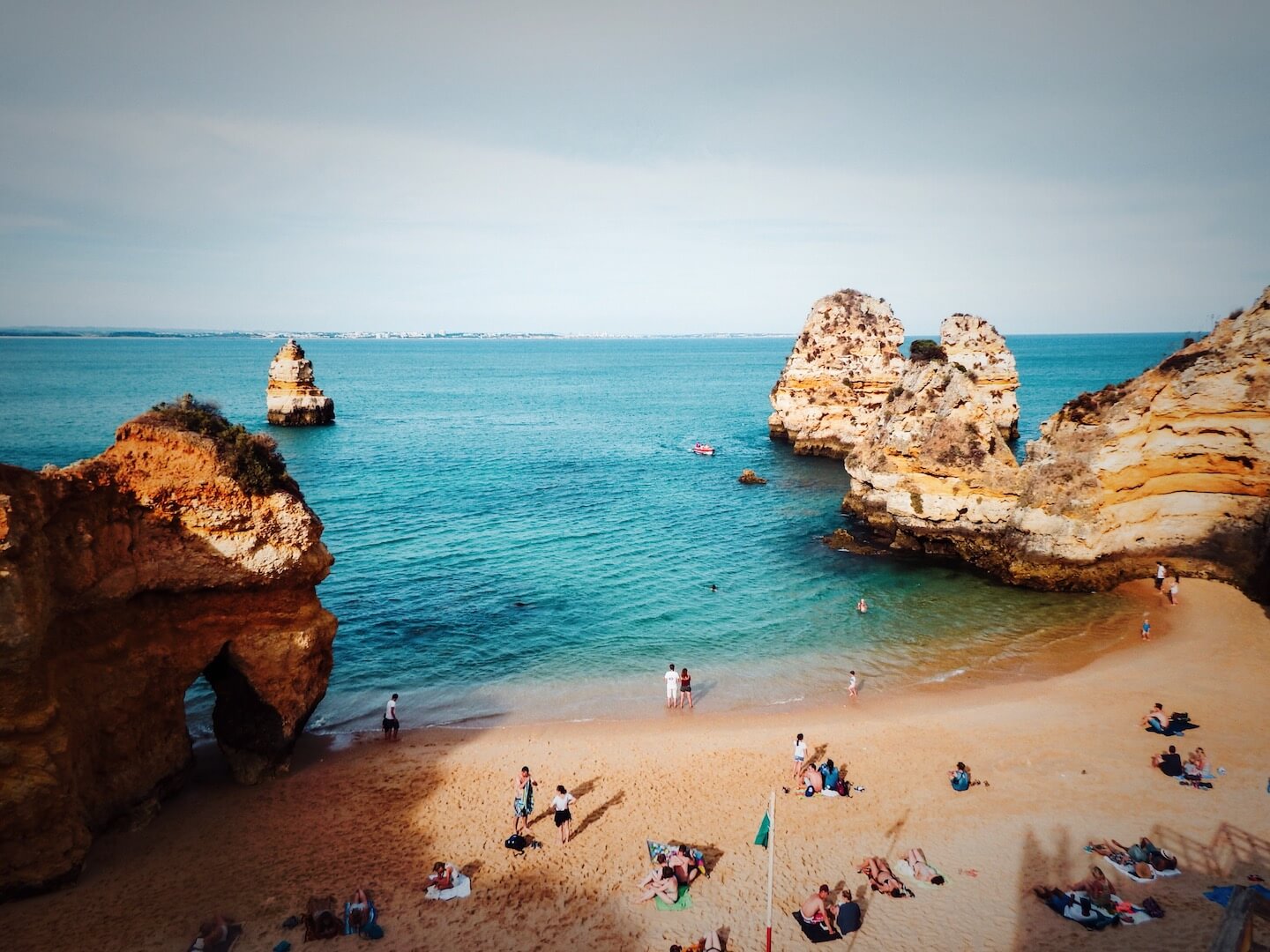 The distinguishing feature of the Algarve region is its coastline of limestone cliffs and rock formations. The dramatic color collision between the yellow limestone and the turquoise ocean water creates a lasting impression.

The region is also full of charming whitewashed fishing villages, reminiscent of its Moorish past. Algarve was ruled by the North African Moors from 700 to 1200 AD. The impact of this era can be seen most keenly in the architecture and tasted in the cuisine.

Beyond the architecture, these towns offer a glimpse of local life. You’ll see older women sitting outside their homes watching all passerby.

Gathered outside neighborhood cafés, groups of men play card games and read the latest soccer news. Fishermen fix their nets on the beach. And, cats and dogs freely walk the streets.

When to Visit Algarve

Algarve is a very popular holiday destination. The season peaks in July and August.

When we visited in early June, we never felt as though it was too crowded or busy. The temperature hovered between 27°C and 36°C.

We also re-visited Algarve in November, which was the perfect time for coastal hiking. If you’re interested in milder temperatures, fewer crowds, and wildflowers, come in Spring, of Fall.

Planning a trip to Portugal? Read these helpful guides next: 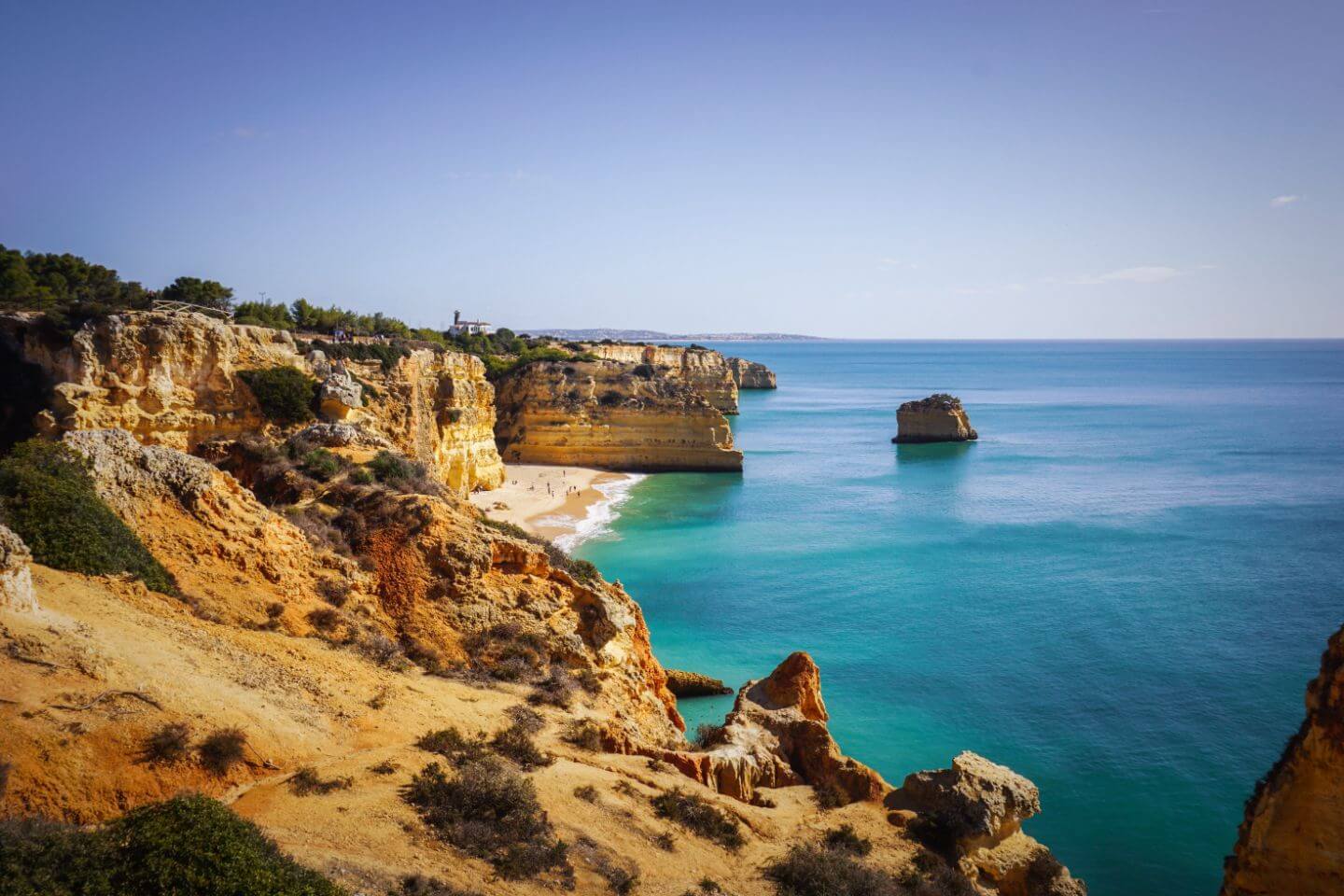 We rented a car for our trip to Southern Portugal. Here’s our detailed 7 Day Algarve Itinerary.

We recommend using the Discovercars.com car rental reservation platform to search for and book car rentals in the Algarve, Portugal. This easy-to-use booking platform compares car rental deals from 500+ trusted providers, so that you can choose the best option for your trip.

Portugal’s highways and roads have excellent signs, making it relatively easy to get around. Beaches and towns have ample public parking. There are parking areas that are metered, but you’ll find a lot of free public parking spaces as well.

One thing that’s a bit different are the electronic toll roads. Unlike the typical toll booths you see in the States, Portugal has a wholly electronic system that records your use of and payment for using a toll road.

Because we rented our car in Portugal, the rental car company was able to activate (with our request) an automated method of payment (using a transponder device) for whenever we drove the A22.

If you’re traveling with a foreign license plate vehicle, you can purchase and activate a prepaid toll card, or purchase pre-defined journeys online. For more info on toll roads and payment, read this article. 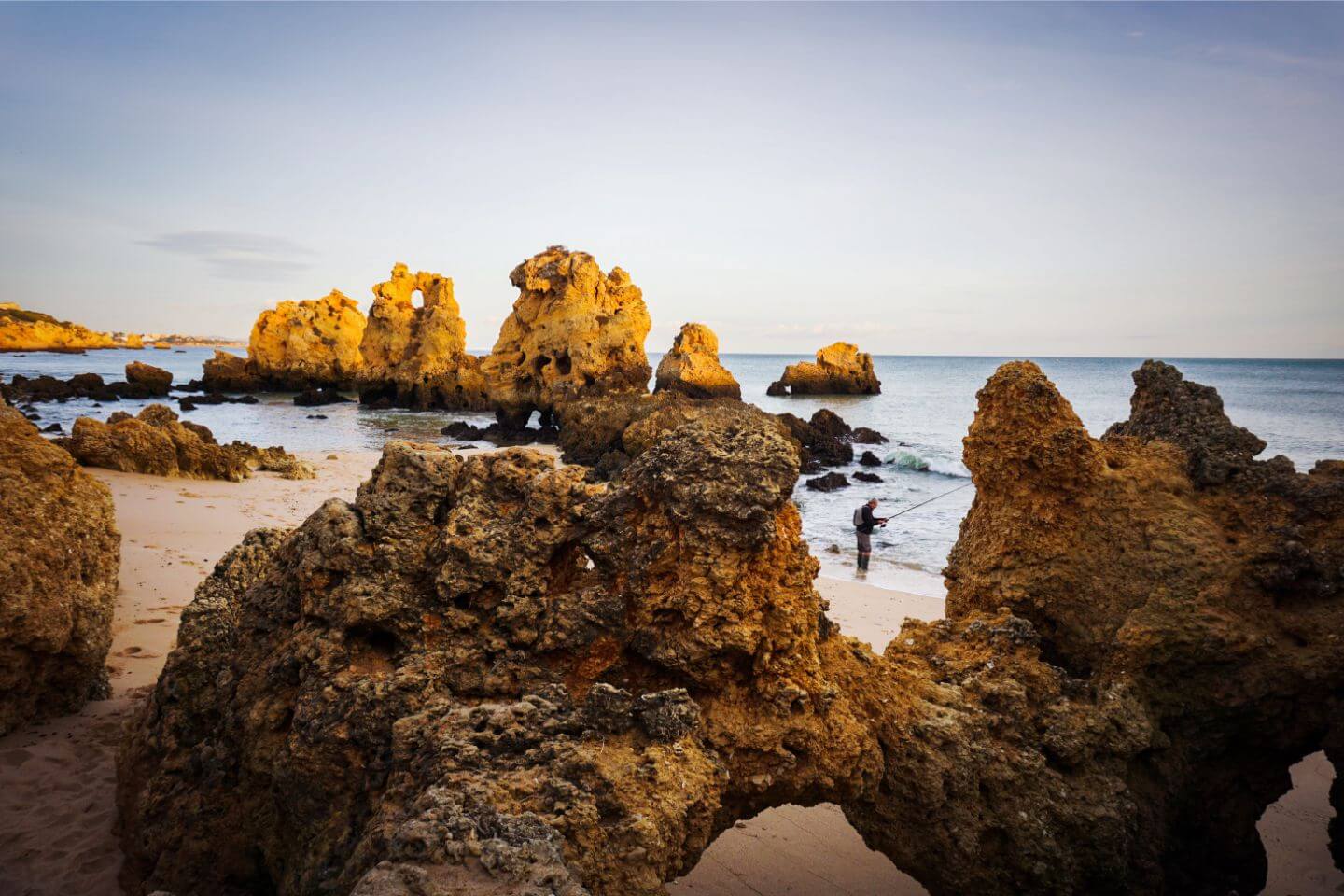 Where to Stay in Algarve

Because the region isn’t very large, you can base yourself in one or two towns, and explore from there. Here’s a summary of the best places to stay in Algarve:

Read More: Where to Stay in Algarve – Best Towns & Hotels 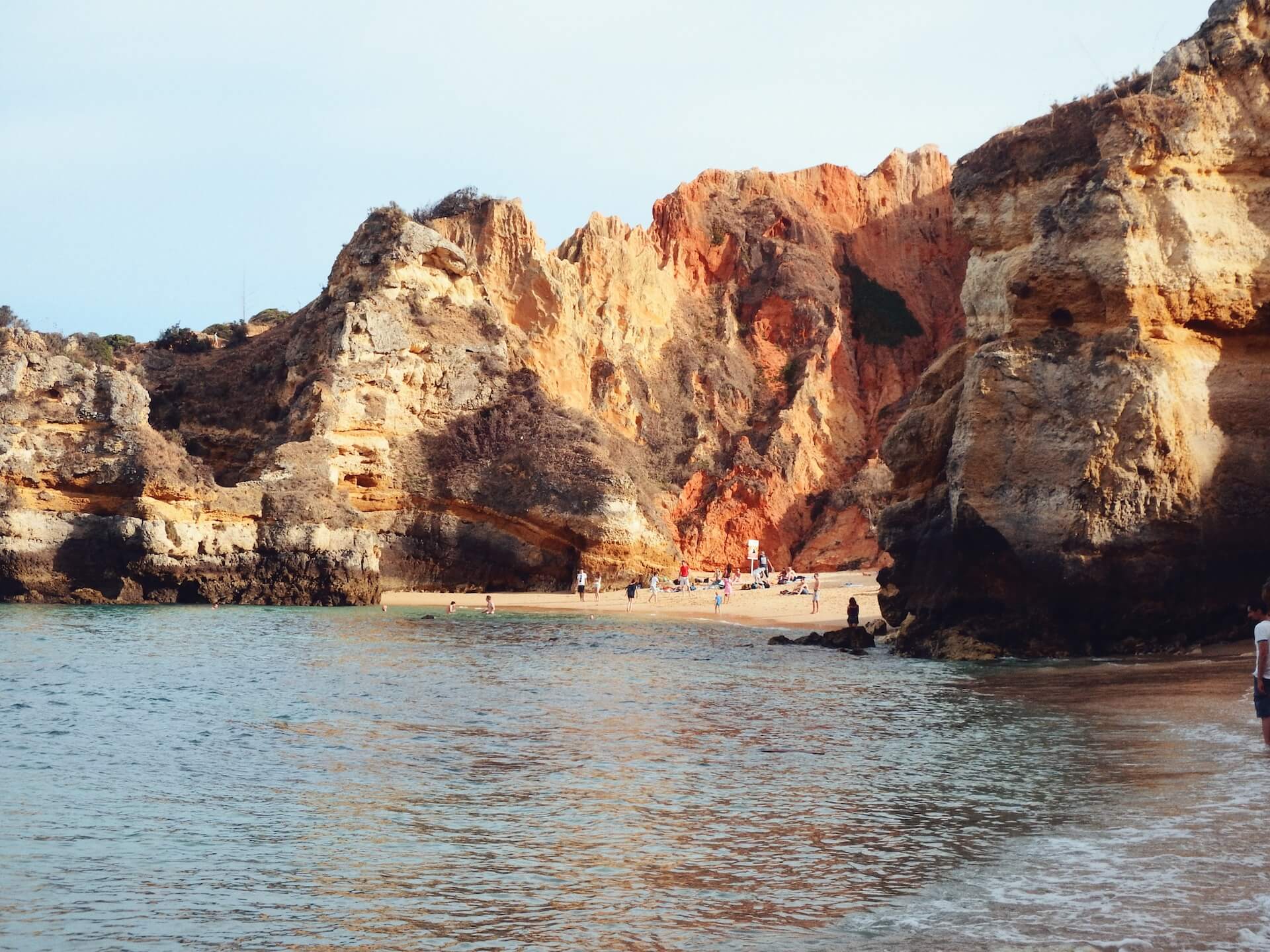 Where to Go in Algarve 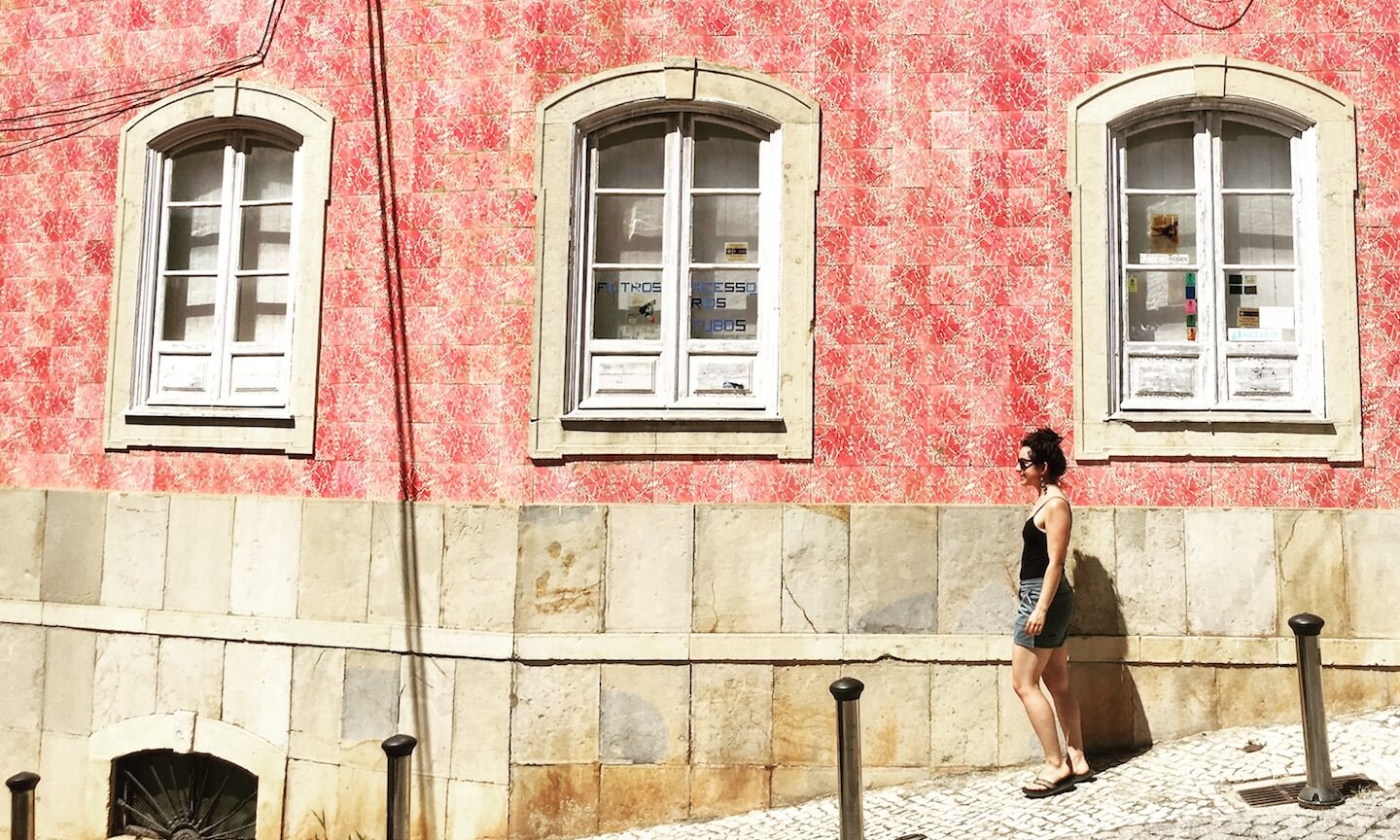 What to Experience in Algarve

A Day at the Beach

Over 80 beaches in Algarve are marked with the prestigious Blue Flag, which is an ecolabel award for beaches and marinas that demonstrate good practices with regards to water quality, environmental management, safety and services, and environmental education.

With over 200 kilometers of coastline and nearly 100 beaches to choose from, deciding which beaches to visit is a challenge, and a good problem to have. These are our favorite beaches (from west to east):

Ponta da Piedade is a section of coastline located 2 kilometers from the city center of Lagos.

The coastal landscape of caves, grottoes, and arches reveals what natural elements have sculpted over thousands of years.

We enjoyed walking the cliffs and taking in various vantage points of the area. We also walked down the steep staircase to the “beach” – which is a generous term for a platform that extends into the water.

You can start a boat tour from the bottom of the staircase. There are also a lot of organized kayak excursions that you can book in Lagos.

Explore the Coast by Boat

Here are some guided excursions that start in Lagos:

Silves is a traditional town located in Western Algarve. Historically, the town served as the capital and defensive stronghold of the entire region during the rule of the North African Moors (700 – 1200 AD).

You can see remnants of this Moorish era in the town’s huge 7th-century red brick castle, 12th-century city walls, and defensive gates. The castle was the stage for many battles and sieges in the 12th century.

Today, this charming town’s most notable residents are white storks. Their giant nests are prominently positioned on columns, old chimneys, and buildings all over town.

It’s illegal to disturb or destroy a Stork’s nest in Portugal, as storks return to their nest each year to raise their families.

When we visited in early June, we saw dozens of storks flying, foraging, and feeding their young.

Olhão is a coastal town in Eastern Algarve. At the town’s waterfront, there are two market buildings (Mercados de Olhão).

One building sells vegetables, fruits and spices, and the other houses the fish market – the largest in Algarve.

The space is loud and lively with men and women whistling as they gut, chop, clean and sell the fish.

When temperatures allow, hiking the coastline offers an incredible sensory experience. From the vantage point of the coastal cliffs, you can see secluded beaches, grottoes, sea caves, and uniquely sculpted rock formations.

There is also an abundance in coastal vegetation that makes for a visual and aromatic journey.

This is a nature trail extending 6 km from Marinha Beach to Vale Centianes Beach. Notable stops along the way are the Alfanzina lighthouse, Carvalho Beach, and Benagil Beach.

Armação de Pêra is an old fishing village turned holiday resort town. The origin of the town’s name is a reference to the fishermen from Pera who used tuna nets (armação) to catch fish.

The tuna fishing industry has existed here since before the 15th century.

Upon visiting, head directly to the “Fisherman’s Beach,” where there’s a collection of small huts used by local fishermen to rest and store their equipment.

The beach is littered in fishnets and boats, offering an authentic glimpse of this region’s oldest industry.

You can taste the fresh catch by visiting one of the seafood restaurants located along the beach. We ate freshly prepared Arroz de Marisco at Restaurante Bùzio.

Because this seafood dish is made from scratch, it takes time – but wow is it worth it!

The Estoi Palace is a 19th-century rococo building that’s been converted into a hotel.

As a visitor, you can see several rooms with decorative plaster ceilings, walk the palace grounds, and enjoy a meal in the hotel tea pavilion.

The pink-coral palace is surrounded by beautifully manicured French-inspired gardens.

Enhanced by statues, fountains, azulejos tiles, and groves of orange trees, the palace grounds are definitely a must-see if you’re in the area. 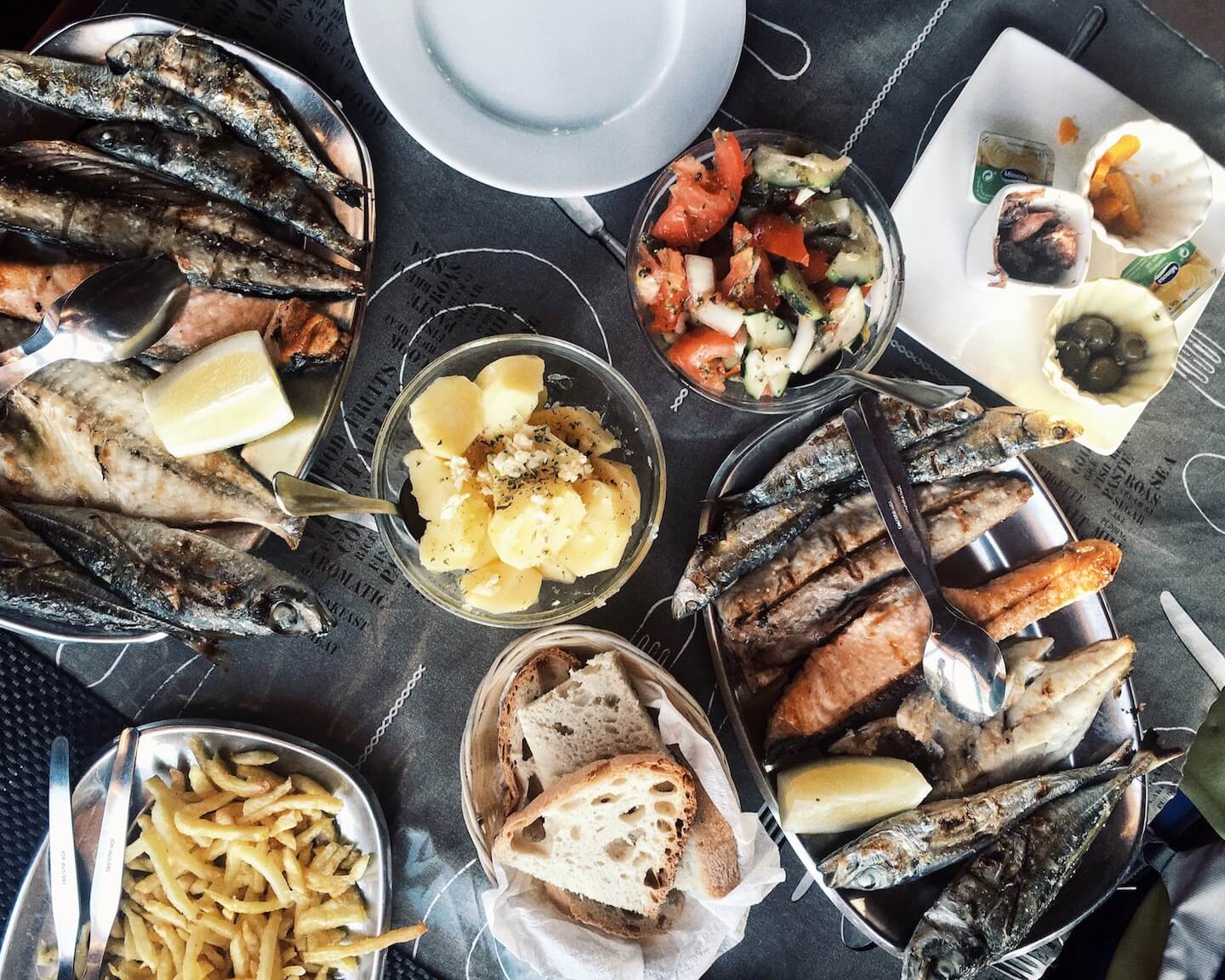 What to Eat & Drink in Algarve

In restaurants, waiters/waitresses will bring you a choice of different meal starters (known as couvert) to your table without an explicit request. These starters typically include bread, butter, and olives. They may also include cheese, sliced sausage, and sardine spread.

The couvert is not complimentary, so make sure the waiter/waitress removes what you don’t want to eat from your table. You are obliged to pay for what you try, and what’s left on your table. So, if you just want the olives, just say “Azeitonas.”

Arroz de Marisco – Razor Rice with seafood. The seafood generally consists of clams, prawns, mussels and other fish. It’s similar to paella, but a bit more broth-y. This dish serves a minimum of two people and is prepared freshly when you order it. You may wait up to 30 minutes, but it’s worth it.

Cataplana de Peixes e Mariscos – Cataplana of Fish and Shellfish is a regional dish served in a pot. The base consists of onions, peppers, potatoes, garlic, and coriander. Fish and shellfish are added in afterward. This dish also serves a minimum of two people and is prepared freshly when you order it.

Where to Eat & Drink in Algarve

Only the places we love

Rei das Praias is a beach restaurant and bar situated at the hidden Praia dos Caneiros in Ferragudo. Grab a drink and watch the sunset. Reservation recommended.

Ysconderijo is a Portuguese-Asian fusion restaurant in São Brás de Alportel. The presentation, ambiance, and quality of the food is outstanding. They also offer various sangria pitchers that will win you over. Reservation recommended.

This small eatery serves roasted chicken to a predominantly local client base in Olhão. The service was so kind and friendly, even though we were pantomiming what we wanted to order. Coming here feels like you’re walking into your grandma’s kitchen.

This unassuming restaurant is located near the Faro Airport. We ordered the Cataplana Pargo ou Cherne, which is a regional seafood specialty prepared in a lidded round-bottomed skillet and made with lots of love. Definitely come here if you’re staying near the airport and you have a few hours to enjoy a meal.

Located in Sagres, this colorful spot offers indoor and outdoor seating. They offer a daily menu of freshly-caught fish as well as chicken piri piri.

10 Best Hikes in the Faroe Islands

How to Get to Kallur Lighthouse on Kalsoy Island, Faroe Islands